Review of Sell-By-Date by Marbleglass Theatre. Returning to Northampton soon.

September 25, 2014
The excellent Sell-By-Date by Marbleglass Theatre returns to Northampton this Saturday and its original home of the Looking Glass Theatre. If you get the chance to see this, do so! 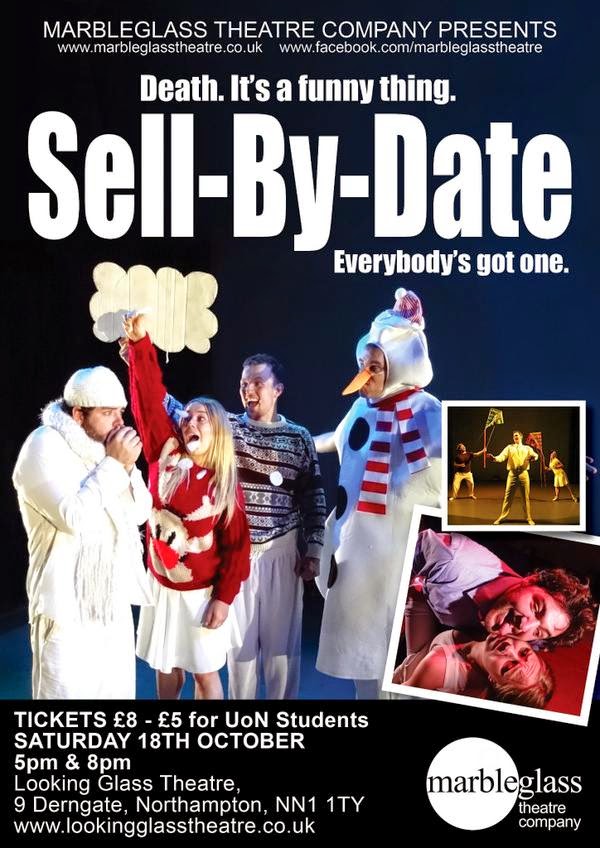 Below is my original review of the show as performed at the 2014 Flash Festival, Northampton:

"... the very dark, very funny and very powerful Sell By Date. From Marbleglass and featuring the talents of Marcus Churchill, Ashley Cook, Joseph Derrington and Sophie Murray, this was a gem. Setting the bar even higher for the week ahead.

The performers in this group were particularly strong and I remember them well from their parts in Animal Farm (Animal Farm review). Whether playing the clown or deadly serious moments, they were at the top of their game. Even this early in their hopefully very successful careers.

The play itself was broke up into many parts, cleverly interchanging the aforementioned clowning, with the heavy and, yes, very emotional parts.

The previously mentioned puppetry scene was my pick for the best part. However the very rude, offensive, politically incorrect and therefore very funny, stand-up routine performed by Derrington had to be my second pick, particularly with the emotional pay-off.

I will also remember fondly the slightly ruder Two Ronnies bar scene and the best set change joke I have yet heard.

Overall this was a very clever, well written piece in need of your viewing as you may not find a better hours entertainment for a while for £6 (it is now £8!). Go see!"

Sell-By-Date was originally performed at the Looking Glass Theatre on Wednesday 14th and Thursday 15th May, 2014.

Tickets for the above can be booked here: https://thelittleboxoffice.com/lgt/event/view/18208