July 23, 2014
THIS REVIEW WAS ORIGINALLY WRITTEN FOR THE PUBLIC REVIEWS. 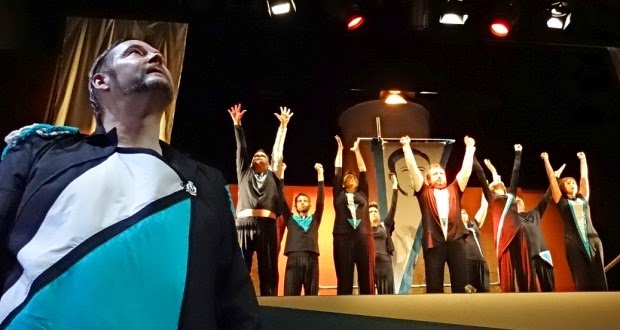 Beginning a review of Antigone by writing, it was all Greek to me would be clichéd, so therefore perfect for myself to do. In the case of the Royal and Derngate Actors Company’s production it would be irrelevant though. As this was a clear, modern, indeed futuristic version of the ancient story. With all the distress and despair generally on offer, it could have perhaps been Eastenders.

Antigone was written by Sophocles almost 2500 years ago and tells the story of an empire in pieces following a crippling war. Ruled by King Creon (didn't Elvis used to sing about him?), whose declaration that two warrior brothers be divided in death, one honoured, one unburied, is challenged by their sister Antigone.

Director Trudy A Bell, who most recently directed the third of BA Actors in a dynamic version of Macbeth (review here) brings a similar style to this vivid production. Sections of synchronised movement and timed speech from the chorus move the story forward and for the most part are very successful, only occasionally unclear due to the music volume (this was improved on Saturdays second performance).

Early in the play we are introduced to Antigone, played effectively by Tina Barratt, who displays very well the determination to see her brother honoured and her scenes with her sister Ismene (Tara Powerville) are some of the best of the play. As the tyrannical King Creon (uh-huh-huh), Steve While also has the gravitas and clarity of voice to portray a King. His crowning glory comes in the scene with his son Haemon (Adam Kozuch) where their exchange of words is both dynamic, ruthless and hugely effective (Haemon: “What a splendid King you’d make of a desert island”). The only light relief from the play comes early in the production with two relatively brief, but excellent scenes with two sentries. Played with gusty by Erica Mynard (behave helmet, damn you!) and Ben Webb, these provided genuine humour and undoubtedly garnered the most reaction from the audience. Much like the Shakespeare I have seen in recent times, where the fool gets the best reactions in a tragedy, these were the fools of the play (I mean that in a friendly way).

The set and costumes from Meryl Couper were one of immediate impact, vivid colours and stylish costumes that would not be out of place on the Starship Enterprise. I awaited the moment that King Creon commanded to Mr Riker to "MAKE IT SO!" or Ismene proclaimed "There's Klingon's on the starboard bow!". Sadly this never happened. However the set provided a most wonderfully effective canvas for the performance to play out against. Also very clever was the staging of the entombment scene, cleverly designed and well directed, it added dynamics to an already strong scene. Finally much of the play was given a greater gravitas by some high quality music from composer Simon Evans-White. Strong beats providing once again a more modern take (excerpts can be found on Mr Evans-White's website here). The tune played to Eurydice's (Helen Gibb) powerful monologue was particularly haunting, all gongs and swishing sounds.


All this summed up to an especially enjoyable production of a, yes morbid tale, with some interesting and effective design and directorial takes and a sprinkling of humour that added greatly to the performance.