Review of Behind The Curtain Tour at Royal & Derngate, Northampton

June 24, 2014
This weekend I went on the "Behind The Curtain" tour at Royal & Derngate and although I was greatly looking forward to it, just to see the ins and outs of behind the scenes of my (disappointingly late in the day) adopted second home, I never thought I would find it quite as interesting as I did.

I went on a tour of the Royal part of the theatre at lower school, however this being some twenty years before I was not likely to remember much, and very possibly, at that time I may have not really been that interested. However those intervening double decades and here I was paying for the privilege and not being crocodiled by my teacher.

On arrival we all milled around the foyer awaiting our tour guide, Erica. We were offered a warm welcome and once numbers had been counted, we were promptly escorted from the building. Standing in Guildhall Road we were given an aperitif of what was to come, an informal but highly informative tour. Lovely little snippets such as the original planned name of the theatre and how it mistakenly got its present one, along with the news of a Marefair theatre (demolished three years after the Royal was opened), that was not quite up to the quality standards of the Royal Theatre.

We were then escorted in through the wealthy persons entrance and invited in the Royal itself (the circle) and interestingly the circle we were told was where the wealthiest patrons of old would sit and not the stalls. It was at this stage that Erica's first assistant Will appeared playing the role of owner and proud introducer to the theatre on opening night ahead of the first production, Twelfth Night.

Weaving our way through old stairs and past the tiny old box office (for those peasants), we found ourselves up in the gods and never having been up here before in the Royal, it is, I have to say both old fashioned and very high. You could say cramped as well, but as we learnt, when it was originally opened the Royal held over three times as many people. Hard to comprehend! 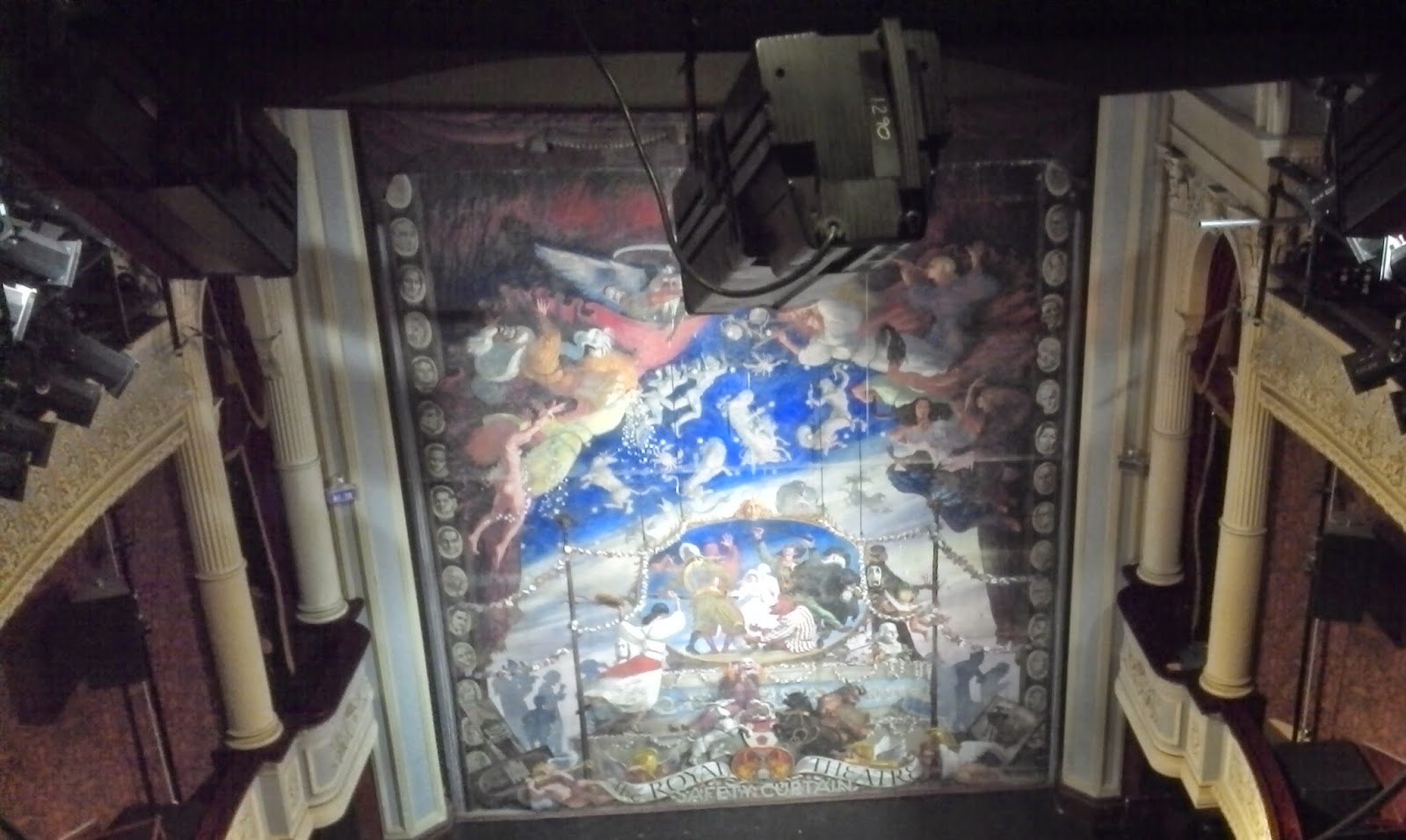 Downstairs we headed and we were told about the devastating fire of 1887 and the super quick three month restoration to enable us to still be able enjoy it today. There was some fascinating information about the safety curtain, painted by Henry Bird (completed in 1978). Featuring many important characters for the theatre including Errol Flynn (bonus points moi for identifying). 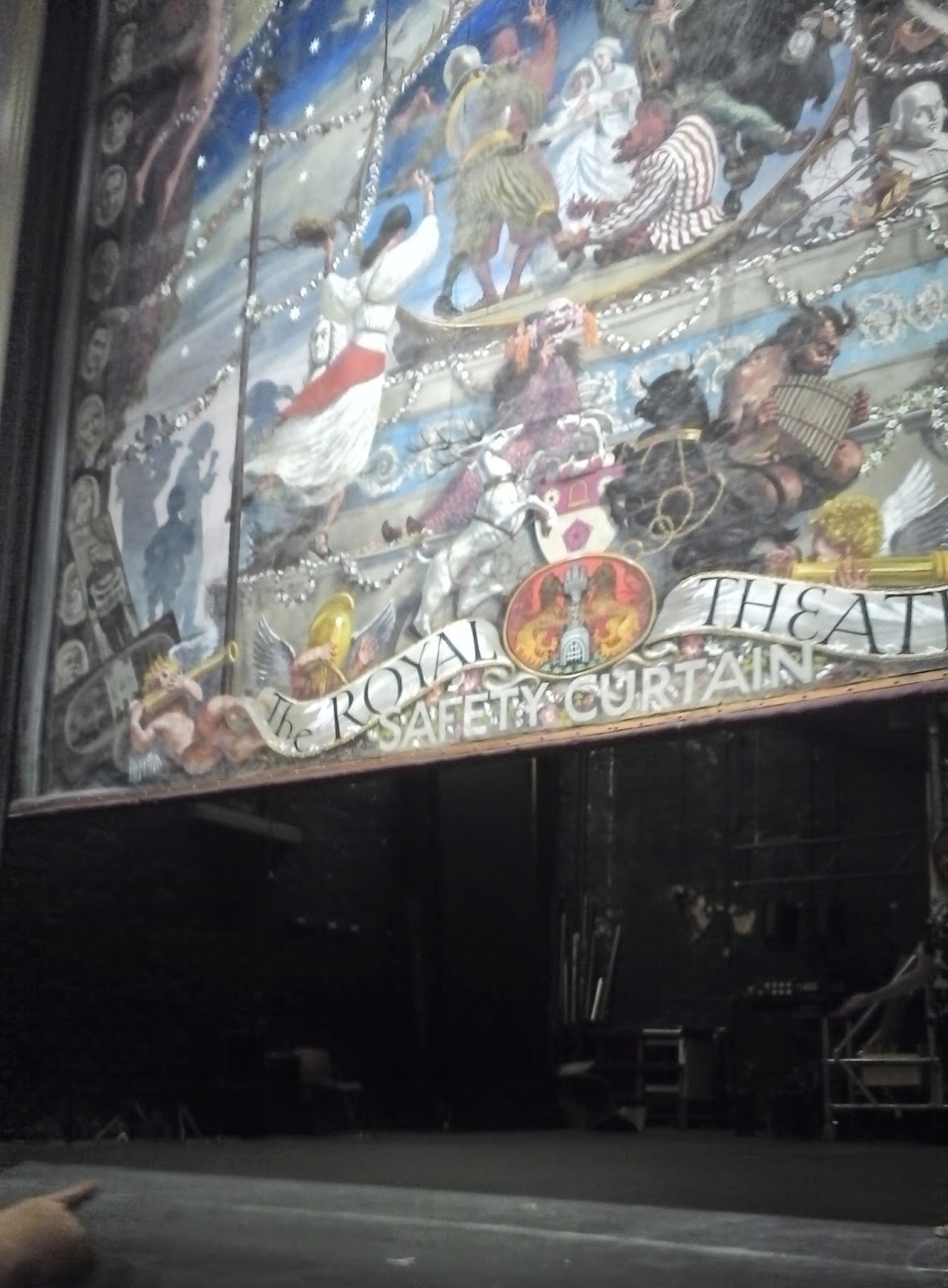 The curtain was then raised on our tour and we stepped behind the curtain for the first time, onto the raked stage (useful for sick to roll down apparently). A raked stage slopes towards the crowd offering an improved view for the audience, but extra challenges for set designers.

After being fully absorbed of the amazing stage area we proceeded to the corridors offering the doors of the changing rooms and encountered a ghostly apparition.

After we had recovered, we were taken through the set design workshop, full of a wonderful lack of new electrical tools, and old traditional equipment. Present in the relatively quiet workshop (no performances on this day in either the Royal or Derngate) were blocks that were apparently soon to become rocks for Antigone in July. They needed some work. 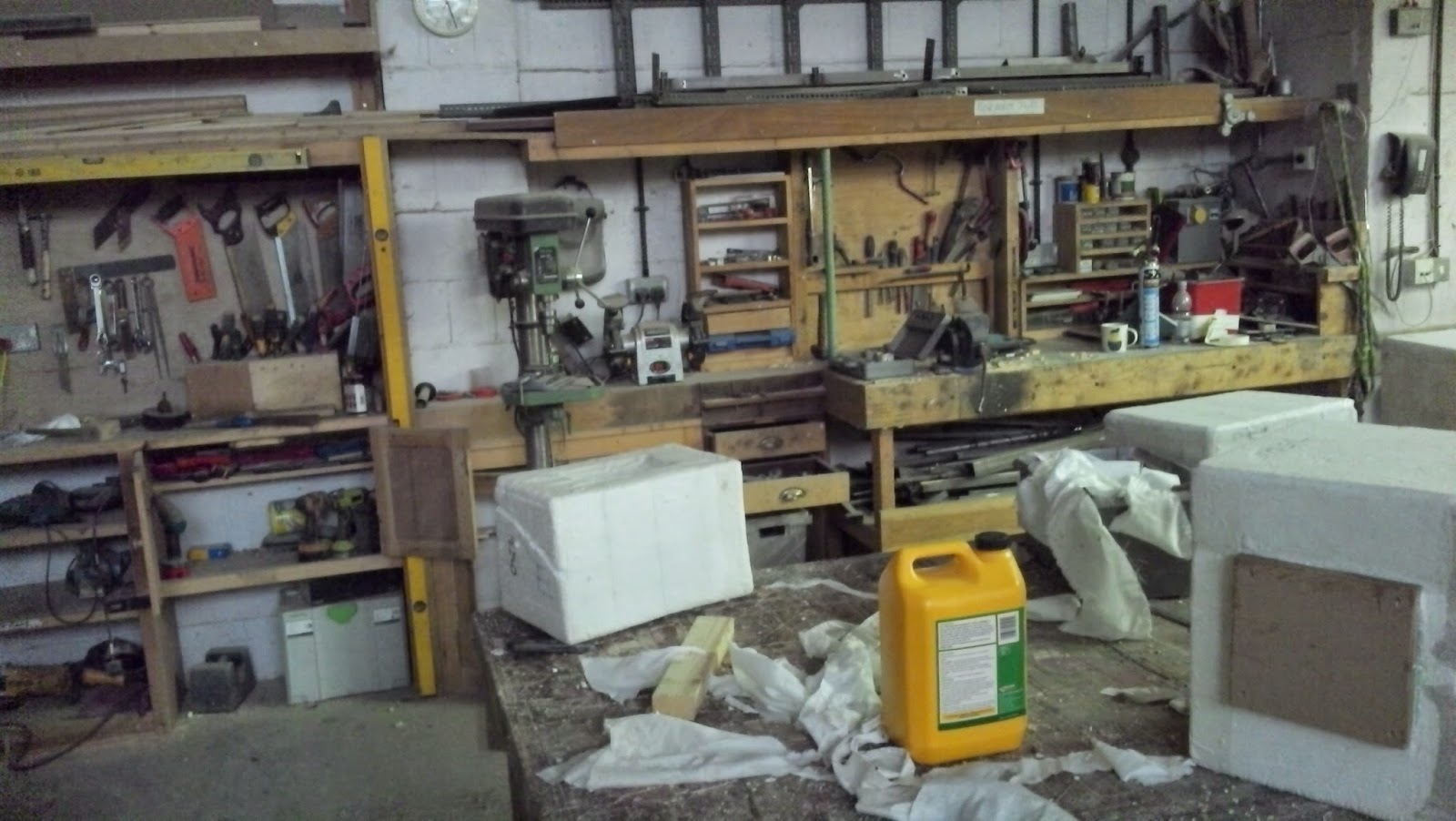 After the workshop we were taken into the sauna, err, I mean the paint shop. A very high ceiling furnace of a room where all the paint work is done for the sets. In here there is a holder (both sides of the room), where the sets for painting can be attached and lifted up and down to enable painting at the bottom and the top.

This bought an end to the tour of the Royal and we crossed the delivery yard of the Derngate and headed through the stage door into the dressing room corridors.

Stepping onto the Derngate stage after having been on the Royal was really quite incredible. The size difference is truly unbelievable.

Here we were joined by Erica's second assistant, Erica, yes another one. This time straight from the ballet and running terribly late. However once both her performance and karaoke king Will's were over, we were told of the way that the Derngate can be dramatically reconfigured with the help of hydraulics to move seating. Going downstairs we were shown the system (a bit dangerous apparently) of raising and lowering the stage to canter for a variety of different shows.

Then we were out the door and onto the set of Honk Jr in the Underground, where I had conveniently been just the night before. We saw here the work of the set designers from the rooms we had seen earlier including a plundered piece of the A Tale Of Two Cities set. With this it was out the door to the seating area outside the Royal and our tour was at an end.

I have to truly say that this was an excellent and informative tour, easily the Royal part was the most interesting due to the history. However it was all very informative and nicely informal.

I thank Erica, Will, Erica and any spiritual apparitions for a most wonderful ninety minutes.