Review of The Last of the Pelican Daughters at Royal & Derngate (Royal), Northampton 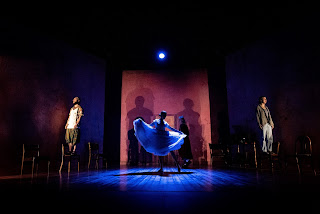 Although I did slip into The Royal last year to see this production of The Last of the Pelican Daughters ahead of its Edinburgh Fringe adventures, I didn't put fingers to keyboard and review it. So, as it happened to be back and refreshed from its successful run there, it was time for another viewing and finally what I think of this show from the creators of the incredible Education, Education, Education?

The four Pelican daughters gather at the home of their late mother to celebrate what would have been her birthday, and also a little "discussion" of her estate, fuelled by more than a little resentment of second daughter Storm and her hope for the money to be shared "fairly". Add a mix of many lurking family resentments and the scene is set for what is a comedy, but also bitterly sad at times as well. 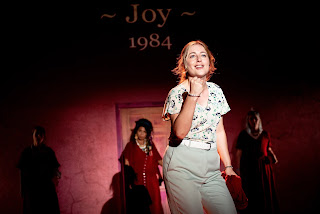 So, first things first, this latest offering from The Wardrobe Ensemble is a long way from the sharpness, skill of characterisation and sheer incredibility of Education, Education, Education. However, while that might be an immediate dismissal of this show, it isn't, mainly because Education ditto, ditto was a staggering creation rarely bettered (I saw it three times).

Pelican Daughters though is still a brilliant show, and as with Education plays on the skills of the members of the group. Therefore we have a brilliant outburst moment from Kerry Lovell as oldest daughter Joy as another family revelation, we have a bold as brass character from Tom England as Derren, and we have as in Education a heartbreaking monologue from Jesse Meadows as Storm. Elsewhere we have the brilliantly sharp scene changes, the clever physical theatre, and joyous moments of dance we had before as well. All good. 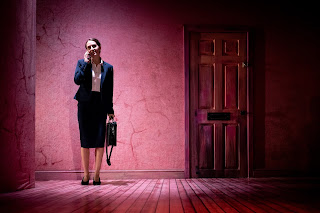 However, while it does entertain, it's not quite as sharp a work, the characters are fine and excellently played, but don't always gell together. When they do spark off one another, like the excellently staged dinner, it crackles with quality. Other times, the pace slows, and you don't quite feel the connection these sisters should have. The arrival of the fifth sibling has its moments, but generally, you don't always believe these characters are a family, even if they fight like one.

Additional characters like Dodo, played by Laurie Jamieson extremely well, are a little too obvious in their design, making them a little too comical. Yes, I know he is meant to be that, but you pine for a little variation from the doped up, stupid, sex-obsessed American persona. 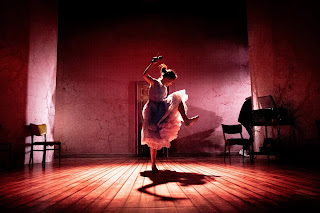 Perhaps one of the best characters is Granny, voiced, and that word voiced is key to how clever this creation is. A sharp observer of proceedings, she is a superbly creative moment that you expect of this brilliant group and one that works here without detracting from the play.

Despite criticism being thrown by me at this, its still head and shoulders above many a show you will see. Neat ideas like the mother being created in flashback by each of the siblings are greatly inventive. It's just that the show at times is just full of ideas, but less direction. Maybe this is a peril of devised shows such as this, well all the ideas gell, you have Education, when they don't or you have too many, you get Pelican

Technically it's fabulous, with sharp music selections, brilliant lighting and Ruby Spencer Pugh's set so incredibly simple a creation, the one moment it springs to life is a glorious moment of revelation in itself.

So, while the above looks a little down on the show, do I recommend The Last of the Pelican Daughters? Yes, without question I do, its 90 minutes of invention, sparkling ideas and characters. Perhaps it needed a more coherent storyline to keep it on a surer footing, and maybe a different title (it's good, but it has little relevance to the play), however, it's a cool little show as only perhaps groups like Wardrobe Ensemble can do, and it's no wonder it was a hit at the Edinburgh Fringe where many cool kids go to play. Recommended.