Review of Sleeping Beauty by The Russian State Ballet of Siberia at Royal & Derngate (Derngate), Northampton 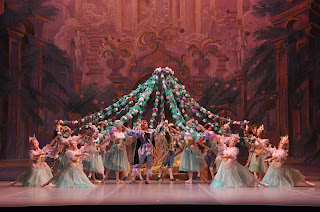 While settling down to write my third review of a ballet (only also the fourth I had seen), it strikes me that I am still limited in my understanding and slightly feel a fraud for attempting to even write a review of one. However, then I think what I always do at this stage, that I shall be here to offer advice to those potential new audience members who are thinking of challenging themselves with a bit of different art, advice as to whether to take the plunge. So, here as a bystander to proper ballet knowledge, I offer my thoughts of Sleeping Beauty by The Russian State Ballet of Siberia.

The tale of Sleeping Beauty needs little introduction, and as my previous encounter with the Siberia ballet, Cinderella attested to, this can be the best way of getting into ballet as a layman. Knowing the story well, goes a long way to enjoying ballet, and who doesn't know about Sleeping Beauty and the knitting needles?

This production immediately captivates with the colour and energy of the opening prologue. Full of excellent moments of choreography, and even this opening piece, full to the brim with that one move we all know, even if we don't know ballet, en pointe.

Despite this being a story told through dance, there are some great characters created. Alexander Kuimov and Vera Surovtseva have a great presence as the stately King and Queen, with the former a particularly expressive face as well.

Francesco is quite brilliant as master of ceremonies Cattalabutte, while scene-stealer and scenery-chewing Egor Osokin is devilishly wicked as Carabosse, who you want to boo in the best panto traditions, and eventually, at the curtain call, the audience is up for doing so, perhaps to the dismay of maybe some of the most rigid of ballet aficionados.

As the Princess and Prince, Anastasia Belonogova and Francisco Gimenez are stunning in their solos, but even more beautiful together when finally paired up in the second half of the second act, and the pieces combined with some special characters including Puss-in-Boots, White Cat, and Little Red Riding Hood form a delightful culmination to the ballet. 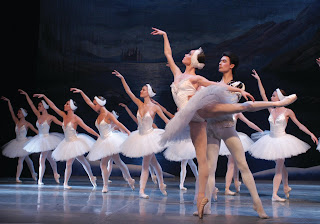 The set is simple but effective, with a large projection, often animated, offering the background to scenes. It's not groundbreaking, but it does the job and allows the main business of the ballet to be unhindered. Conductor Anatoliy Chepurnoy and his large orchestra fill the theatre beautifully with Tchaikovsky's classic music.

This was easily the best of the three offerings of ballet that I have seen at the Royal & Derngate, and this talented group provide a solid evening of touring ballet and are also presenting two other shows this week at the Royal & Derngate, Coppélia and Swan Lake (as depicted in the second and third images on this review). If you have never encountered ballet before, maybe you should take this opportunity, but you may need to read up on the synopsis beforehand!

A solid performance of the classic tale with great production and one particularly great star turn.