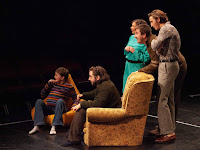 Watching the BA Actors perform Alan Ayckbourn's Christmas play Season's Greetings had quite a tinge of the very different about it. It all felt very traditional, and dare I say, safe, for the performers of the University of Northampton BA Actors to be offering. Over six years, I have got used to them bringing cutting, sharp, taxing, dynamic, brutal and controversial stuff to the stage, so to see James Bryan as Bernard performing a puppet show in the cosy world of Ayckbourn (admittedly with his trademark modern strife thrown in), it all seemed a little weird.

However, over the last couple of years, this cosy, more traditional theatre has become the staple of the Christmas time offering, with the group also tackling pantomimes as well. It all makes a huge amount of sense, as so much of their potential future earnings may well come from this area.

Here we have classic Ayckbourn, filled with diverse characters, and varied aged ones, performed by the staple early twenties performers of the BA Actors, and while it stretches things a little at times, it always just about works. So here we have young William Storey playing armchair, couch potato old man Harvey, caricatured a little, but still effective.

There are a load of excellent performances here, all of the cast creating their very individual characters delightfully, and that is the bonus with an Ayckbourn play, especially with Season's Greetings. These are broad, big and chunky characters to get your teeth into, and here the University actors do just that. There is a danger of overdoing the situation, however, it's all carefully judged. Therefore when Kelsey Bing is pretending to be more than a little tipsy as Phyllis and James Bryan gets ratty over his puppet show, its kept on the right side of not being overplayed. It also helps that it is clear that we have a cast enjoying the roles they are playing.

Elsewhere in the cast, there is a nicely controlled performance by Rafael Oriyomi as the initially boring Clive, totally out of place, but unexpectedly finding himself very involved. This doesn't though come at the hands of Rachel, despite her after it. Rachel is played plainly, but perfectly by Megan Harding-Williams. Wanting, not getting, frigid, and doomed to failure. 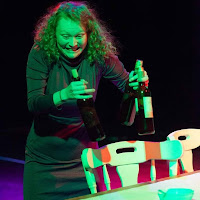 Ever since I first saw Season's Greetings, I always felt that both Pattie and Eddie were missed opportunities within Ayckbourn's script, with relatively little to do compared to those around it. However, credit must go to Vivian Gwaspari and Siôn Rhys for making them still entertaining in their quiet ways.

Finally, Louise Lord is fabulously over the top as Belinda, out clearly for action once her head is turned. This is balanced nicely by her carefree husband Nevile, played by Olly Allen. Laidback in the extreme, and hardly even flinching when certain activities become rather well known to the household.

It was also superbly staged with a neat home layout delineated by white lines and felt believable as a home layout. It was nicely directed by Séan Aydon and assisted by Daniel Hubery, and included a little opportunity for the BA Actors to do a little bit of their excellent stagecraft in the excellent scene changes, a little bit of freedom within Ayckbourn's script.

It was extremely refreshing to see the BA Actors doing a bit of Ayckbourn, a break from the norm, and in this, they showed immense skills in doing it as well. These are once again an excellent group and the course continues to go from strength to strength as well.