Review of A Murder Is Announced at Royal & Derngate (Royal), Northampton 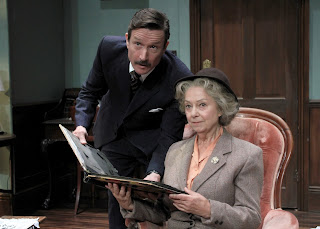 While The Mousetrap continues to capture audiences in London, and the current run, also in London, of Witness for the Prosecution, continues to entertain, it seems the perfect time for a bit of regional Agatha Christie as well. Step forward the Middle Ground Theatre Company and their version of the Miss Marple tale, A Murder is Announced. 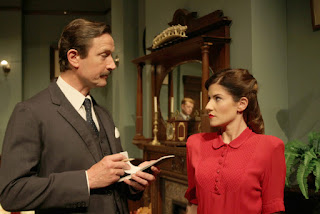 Chipping Cleghorn residents are astonished when the announcement of murder appears in the local newspaper. Enter Miss Marple, here for some treatment to her rheumatism, and clutching flowers in an attempt to not look too eager, to help unravel events.

A Murder is Announced is classic Christie, big characters, red herrings, knitting needles and twist, twist and another twist, and drawn out upon a gorgeously detailed set, filled with chair after chair, and I can't help but think director and designer Michael Lunney deliberately got character Julia Simmons to test ever chair (bar the chaise longue) in the first five minutes, just to say, hey look at all these chairs. 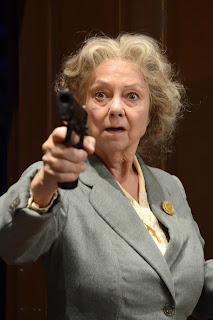 As the feature character, Miss Marple, Sarah Thomas happily brings her interpretation to the role, shying away from the many versions we have seen over the years. She still has the curiosity, feistiness, and mischievousness, but this is Thomas' take without a doubt. It's perhaps a shame though that she has, as ever it seems, very much a back seat in her own story, as Inspector Craddock is the much more important character here, whittling out the clues. It is handy therefore that Craddock is brilliantly created by Tom Butcher, a witty, world-weary styling of a role. He spars with Thomas superbly in their few true scenes together, leaving you sad that you don't get a few more opportunities to witness it.

Elsewhere Barbara Wilshere is solid, if at times a little underwhelming, as the lady of the house, Letitia Blacklock. Much better is Karen Drury as the brilliantly dotty Dora Bunner, beautifully created with some nice and consistent mannerisms as well. 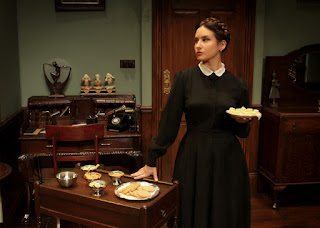 Lucy Evans is superb as the plum voiced, sharp talking Julia Simmons, and Will Huntington has great fun as her brother Patrick. Finally from the cast, Lydia Piechowiak effortlessly steals every scene as the maid Mitzi, convinced everyone is out to get her, and master of the one-liners, providing many of the comic moments.

There are weak points, of course, it can all be a little slow at times, especially the long first act, and a few too many lines in Leslie Darbon's adaptation. The pace is also not helped by the now rare sight of curtain down during scene changes, some of which went on curiously long. Some of the sound effects were a bit unusual too and not particularly well localised for a professional show, hence when the patio doors were opened, the coo-coo of the pigeons didn't sound like it was coming from the patio doors at all. The key dramatic moment of death also, while relatively well lit and cleverly staged, was let down a touch by a rather limp sounding end. 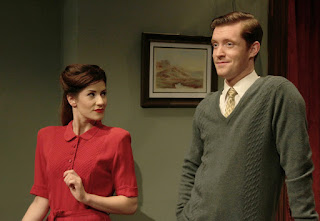 A Murder is Announced though is standard fair and everything you would expect of Christie. While a few true fans might baulk a little at the remodelling of the original tale, it still should tick many of the boxes to keep them happy. A play not without its faults, but more than entertaining enough for these cold winter nights.

A Murder is Announced runs at Royal & Derngate until Saturday 18th January 2020 before continuing its tour.