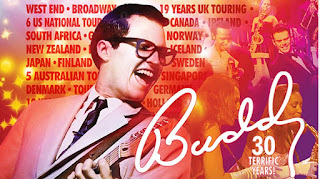 When you finish watching the two hours of Buddy - The Buddy Holly Story, the briefness of it, and the fact that you have heard nearly everything that the great Buddy himself was able to give to the world enforces the sadness more. If it hasn't by the time of final spotlight, you will probably by then, have a tear in the eye, if any of Buddy Holly's music ever meant anything to you. Eighteen months is all that the world had of Buddy, and this show does make you feel how brief that period is.

Buddy along with his The Crickets, went from nobodies at a backwater radio show in 1957 and onto total world recognition before his death in 1959. During that time a collection of perhaps unchallenged music showing this period of music was created. As Elvis was gyrating his hips, Buddy performed, in heaven forbid, his glasses. Thick rimmed ones at that. He wanted to be different, he challenged things, and yes, he would have created brilliant, innovative music for years, without any doubt.

This brand new tour had on opening night at Royal & Derngate, Christopher Weeks in the lead role (you may see AJ Jenks as it tours around the country), and he has some incredibly strong skills as a musician and singer, and more than a bit of Buddy about him. If I had to be critical, as is my role, he is too old for the role and doesn't always get those little vocal mannerisms perfected, yet. However, it was clear, having seen the show before (and much later in its tour), that this tour is going to grow, and I'm sure Weeks will grow with it. 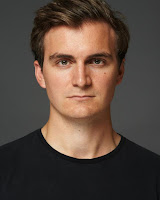 It is perhaps easy to neglect the rest of the cast in a show predominantly telling the tale of one person, however, they all make such an impact that they cannot be neglected. When we hit the Apollo Theatre, Harlem, there is a show-stealing performance of Reet Petite by Miguel Angel as Tyrone Jones. It's also good to hear a bit of Shout performed by Cartier Fraser (as Chantel Williams) and Sasha Latoya (as Marlena Madison), even if I'm not sure it could have been performed on the same bill as Buddy at all.

Joshua Barton is a truly superb The Big Bopper, getting pretty much everything right vocally and character-wise, and is a highlight of the show. Meanwhile, Ben Pryer proudly sports the tightest pants as Ritchie Valens and thrusts his hips in his best Elvis attempt. Finally, a special mention to the extremely busy Harry Boyd as a bag full of characters, switching with ease and at one point dashing off for a quick change and back on sporting a trumpet for the big finale.

Singing performances were generally excellent across the board and its a strong group of musicians on the show as well. The show itself is the same as what I saw three years ago, and very possibly you might have thirty years ago, and maybe that is still its weakness mentioned in my previous review. The drive of the first part is just teasing you, and keep the story ticking along. It doesn't start as a show until we reach the Apollo, and the staging itself is in need still of being spruced up a little perhaps.

Opening night at Derngate was also beset by a multitude of technical issues, from incorrectly timed blackouts, microphones cutting out, and instruments cutting out as well. It is a testament to the skill of the performers that they all carried on without it showing or affecting them.

Early days for this tour, and it's obvious, this will grow in strength as the whole thing beds in. Therefore I'll make the difference of rating this without the issues, as tonight they won't happen (probably). If you have seen Buddy - The Buddy Holly Story before, this is no different, and only you know whether you want to see it again. If you haven't yet seen the story before, and consider yourself a fan of music, it is a must-see.

Buddy - The Buddy Holly Story is at Royal & Derngate until Saturday 14th September 2019.