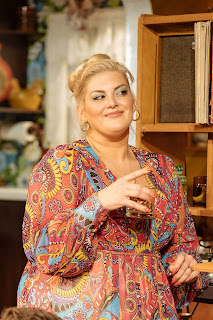 Despite only having seen Abigail's Party performed on stage once before, it is without much question my favourite play, based mostly on the groundbreaking BBC recording in 1977 of the original Hampstead Theatre version. So, there was never going to be any question of enjoying Mike Leigh's fabulous lines and awkward social interaction, but what of this production itself?

Beverly and husband Laurence have opened their house for a party, and new neighbour's Tony and Angela are invited, along with neighbour Sue, who due to her daughter Abigail's party, has found herself turned out of her own house. An evening of fun is set to occur, or not.

The role of the domineering and generally unlikeable Beverly is so much ingrained in most people who have seen the original as being Alison Steadman's that any actor attempting to play the character must feel a controlling factor upon their shoulder, and as such this character more than any other in director Sarah Esdaile's version is left untouched with this new interpretation. Jodie Prenger is superb though, surprisingly so at times, despite her playing Steadman as Beverly more than Prenger as Beverly. It's a shame at times that nothing new is tried with the character, but perhaps also it feels wise. 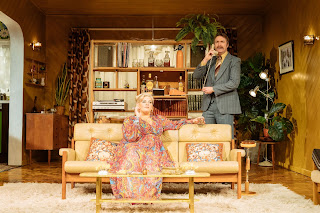 The other characters are given a little more chance to add their own interpretation. Vicky Binns adds the greatest successful variety to the role of Angela. Dispenced of those classic seventies glasses of the original, she is wonderfully innocent, oversharing, and clearly at times frightened of her controlling husband Tony. Playing Tony is a solid Calum Callaghan, but is perhaps a victim of what must be the director's decision to tone down much of the drama of Abigail's Party.

This version seems often too sucked of the tough drama that it truly has, and makes Leigh's play work. Tony's controlling of Angela is underplayed, with references to his not allowing her to drive and the underlying hints of violence easily discarded. Meanwhile, the role of Sue, so sad at times is given too much of a comic performance, with Rose Keegan too light in delivery, while definitely a perfect vocal delivery, her irritating mannerisms end up making the audience laugh far too often when they should be feeling the sympathy for the character.

Daniel Casey's Laurence is a little manic at times, perhaps a shade too Basil Fawlty even, however, there is a nice underlying tension between his character and Beverly which is one of the few surviving areas of drama. Very much unlike his key scene in the second act, which lacks so much of the drama it should hold and feels poorly staged as well. 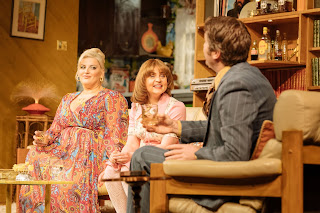 Janet Bird's set is a visual delight, clearly paying great homage to the original with everything looking perfectly seventies. Unfortunately, it appears to be designed for a much smaller stage than the Derngate, sitting in the centre looking really rather tiny. The design issue goes as far as the fact that fifty per cent of the audience doesn't get to see some of its delights. I only discovered at the interval that from my still relatively central seat in the stalls that there was a delightfully designed kitchen visible.

The direction also has its issues in a larger venue, with blocking clearly designed for more compact audiences. An example of which is Tony's arrival, quickly heading over stage right to stand by a pouffe and those in the audience on the left don't see his face again for about 15 minutes. It's clearly a victim of the space at the venue as the production would be one hundred per cent better at times in a smaller theatre when the audience get the full picture of both stage and performers.

Abigail's Party is a brilliant play, no question, and while this isn't its best version, too much of the drama has been removed especially, it's still entertaining enough if you haven't seen the infinitely superior original. As it is, it is fine production, however, when you have the quality of a play like this, fine maybe just isn't enough.