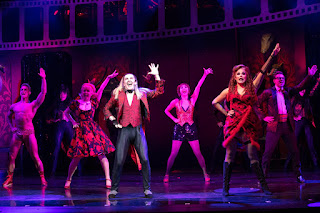 Seeing the 46-year-old Rocky Horror Show at the theatre for the first time is quite an experience on many levels. First and foremost as a regular theatregoer, the audience, even on a relatively demure evening of a Monday, is something you would never really experience at a theatre beyond this show. Many are dressed up (even on that demure Monday), and so many are so in tune with the show, that these regular fans have become entwined within it. They know every word of the script, they contribute to it, they enhance it, often they make Richard O'Brien's already adult content into something much more adult. It's a revelation of experience, much before a newbie such as myself even considers the show. 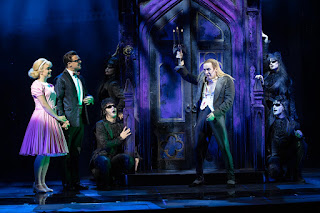 Laura Harrison's beautifully clear rendition of Science Fiction/Double Feature sets the scene for some generally excellent performances of O'Brien's classic tunes, in a musical which is clearly audible, sadly not something that always happens with many productions.

Our curtain opens up on inexperienced, but, the newly engaged couple, Janet (Joanne Clifton) and Brad (Ben Adams) on route to see their former tutor Dr Scott (Ross Chisari). Getting a flat they end up at an old castle seeking a telephone, and their evening changes into an intriguing night of sexual experiences and aliens. 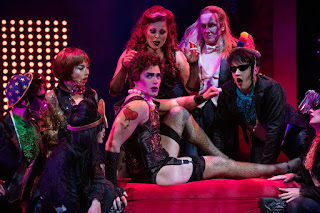 Considering the number of performers in the industry, it curious for a regular theatregoer to find just six months later at the same theatre, the same leading couple in Clifton and Adams. In Flashdance last year, their partnership was probably the best part of a slightly average show, so, perhaps you can see why the casting was decided. However in Rocky Horror (a much better show), their partnership doesn't have the same opportunity, as their chemistry of Flashdance has no chance of occurring in this wacky world, and while Adams shows his excellent vocal ability once again, and Clifton is innocent enough and looks the part as Janet, she doesn't get any real opportunity to show the dance skills she is best known for. It works, but only just, but at times it does smack of some lazy, it worked before, casting. 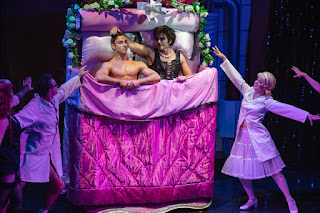 Stephen Webb as Frank N Furter has superb stage presence and oozes the confidence needed to bring this crazy character to the stage. His rapport with the audience, that ridiculously knowing audience, is great, particularly those in the front rows who he happily plays along with. His best moments come in the second act, maybe getting more at ease with the audience, and his vocal performance is of a constant good quality, most particularly during I'm Going Home, a highlight of the show.

Dom Joly is our narrator, and the role is the one that the audience has become clearly absorbed into over the years, garnering the bulk of the interaction. He gives what feels like a good performance and he handles the audience mostly well, but it's difficult to know how much of the shout-outs are expected. Observing the audience though, it wasn't totally clear that those fans of old were all totally on his side. As Rocky himself, Callum Evans gives a stunningly acrobatic performance, pulling some jaw drawing moves at times. These moves won't be the only thing that the men of the audience will be jealous of, as he clearly has the physical appearance required for Frank's "perfect" creation. 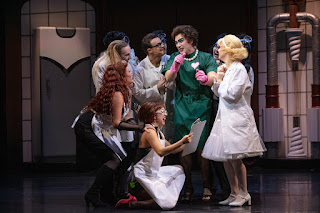 The best performance of the cast though is definitely Kristian Lavercombe as Riff Raff, a character originally made famous by O'Brien himself. He is brilliant and epically sleazy, creepy and with perfectly pitched voice and movement. He steals the scenes he is in, even those where he is just in the background. A superb comic performance.

The musical numbers are slick and nicely choreographed by Nathan M Wright, with perhaps the best of the show represented in Over At The Frankenstein Place, the first opportunity of the superb ensemble Phantoms to show their skills. 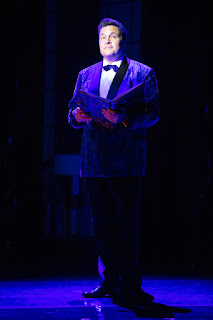 As a fan of B-movies as a youngster, I can see much of the influence that O'Brien has got to create this wacky world. It's slick as a show but has the edge around it to show that it's also ridiculously tacky and doesn't take itself one inch seriously. The story gets a little muddy in the second act, and often, it's not totally clear what is going on, however, the solid performances and the crispness of the lighting from Nick Richings keep the attention, the floor show looks fabulous, and there is some brilliantly atmospheric work creating the Super Heroes sequence. Dry ice overload.

George Carter directs a brilliant band, filling the theatre with O'Brien's sparkling tunes, and it all looks a delight on Hugh Durrant's stunning set, a mixture of cartoon and gothic, and neatly tying in the B-movie influence with a spiralling film reel around the top.

The Rocky Horror Show is unlike any theatre show you will have seen before. Sometimes the audience gives you a feeling that you have stumbled into a private club or cult, and you will experience behaviour you will almost certainly not have experienced before. None of this detracts from the fact that you should see this touring version if you haven't seen Rocky before. Don't be scared of the men in suspenders, and embrace the madness of O'Brien's world, nicely created in this version which may well be landing at a theatre near you soon as it continues its long tour.


A vibrant looking and a perfectly kinky new version of the classic musical.
⭐⭐⭐⭐