Review of Our Lady Of Kibeho at Royal & Derngate (Royal), Northampton 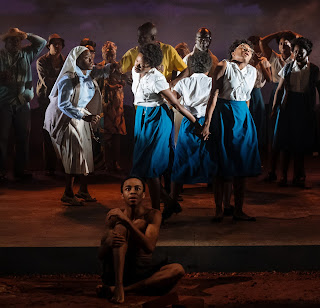 The premise of Our Lady of Kibeho by Katori Hall is one that on paper would seriously not appeal to many peoples perhaps, mixing religion and the background of the looming catastrophe of the genocide against the Tutsi, it maybe alienates plenty of people immediately. However, this is a great shame, as there is much to genuinely admire, and perhaps more surprisingly enjoy of this latest production from Made in Northampton and director James Dacre.

Hall's story of this "true event" opens with a confrontation between Sister Evangelique (Michelle Asante) and Father Tuyishime (Ery Nzaramba) over the fact that pupil Alphonsine Mumureke (Gabrielle Brooks) claims to have seen the Virgin Mary. Few believe her at first, ridicule her and bully both her and anyone who supports her, however, soon another sees visions of the Virgin Mary, and then another, and soon this small little college in Kibeho, Rwanda is very much a focal point of attention. 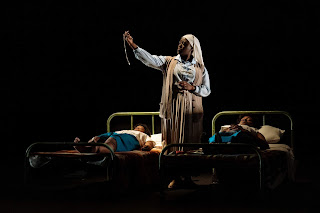 Our Lady of Kibeho perhaps takes two forms in an audience perspective, while those of a religious nature will gain perhaps greatest interest from the tale it tells, the latter, non-religious, like myself, need to come at it from a different angle, as no matter how enthralling the story might be, to the latter this "true story" could never be so.

As is happens, Hall's play works incredibly well on both levels, it's witty, surprisingly so from the outset, it doesn't preach regarding the religion, it just tells the story, and perhaps my greatest concern, the possession sequences are powerful, and never at any time at all, comical, as there is obvious potential to be. This latter comment is the most important perhaps and succeeds only because of the skill of the performers and the staging. If these sequences were to become comic, irrelevant of how much humour the script provides, the whole play would collapse. 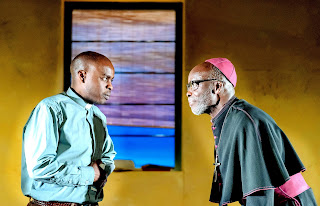 As such, Brooks as Alphonsine, Yasmin Mwanza as Anathalie Mukamazimpaka and Pepter Lunkuse as Marie-Clare Mukangango are to be applauded for their captivating performances, providing stark realism in the situation they find themselves. They surprise and convince in the possession sequences and while sometimes these scenes are occasionally overdramatic, they also contain some extremely neat stage tricks.

Nzaramba is tremendously powerful as Father Tuyishime, balancing the agony of whether to believe these events over the responsibility he has for those in his care. Often at odds with the Father is Asante's Sister Evangelique, who also frequently provides great comic moments despite the power of the events unfolding. It never feels wrong to be laughing during this play such its the control within of Hall's balanced script. 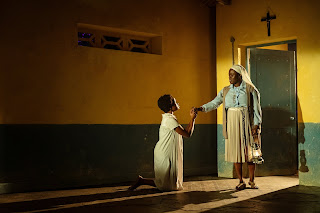 The depth of great performances continues with an excellent Leo Wringer as Bishop Grahamanyi, his switch from joviality to often quite frightening stifled aggression as in his first scene when confronting the Father and Sister are tremendous. As is the "Jesus" arrival of Michael Mears' Father Flavia, once again bringing brilliance to the stage. His gradual realisation from disbelief at first of handling yet another vision to an eventual and almost absolute conviction of truth is superbly done.

Direction from James Dacre is smooth, scenes melting into one another with ease, as Jonathan Fensom's superb set morphs with equal ease. With the set and some stunning work from lighting design from Charles Balfour, we are quickly transfered from enclosed building to sweltering plains of Africa and back again into the dark dormitory and an extremely neatly realised confessional box. It looks good throughout, and with some stirring music from Orlando Gough, both live and recorded, it sounds sublime as well. 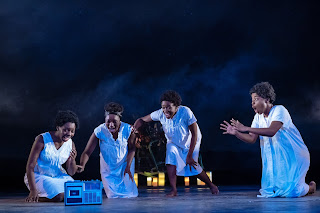 There is also an excellent company of community actors fleshing out the world of Rwanda, and these bring their own individuality to all of the characters as well, despite just providing background much of the time.

Our Lady of Kibeho is a surprise, it's a brilliant script, it has some superb performances, and is created on the Royal stage with style. It doesn't preach, it tells its story well, and works easily for this non-believer as a piece of brilliant theatre.

Our Lady Of Kibeho runs at Royal & Derngate until Saturday 2nd February.