Review of Cinderella by The Russian State Ballet of Siberia at Royal & Derngate (Derngate), Northampton 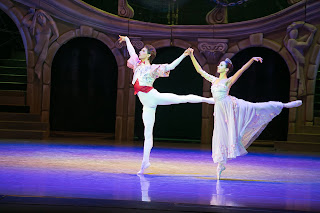 The story of Cinderella lives strongly in most peoples memories, perhaps told as a bedtime story, or perhaps a pantomime at Christmas, perhaps less so first experienced as a ballet. It does though perhaps offer one of the best opportunities for someone to experience ballet for the first time (or the second in my case), as its immediately familiar tale allows you to not try to work out what is going on, but to experience the ballet properly from the outset.

The first thing that strikes from this production by the Russian State Ballet of Siberia is the quality of it, there is a striking full height digital projection throughout the show, which moves us from location to location with it's switching backdrop. It doesn't, as sometimes can feel, a cheap alternative to a physical set, and instead keeps the piece flowing better, with concentration purely on the dance. This projection is also neatly used as an interactive element at one point with the mirror of what Cinderella is to become. It's clever and gives that extra nice visual flair. 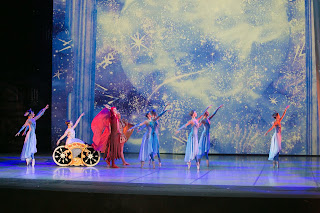 Also, the production has some striking costumes throughout by Valeriy Kungurov, full of vibrant colour and style. There is no greater than the rather magnificent clock costumes of the opening scene (and returning later). This scene itself sets the evening out for an entertaining and vibrant one, as the clock scenes are the particular strong point of the 12 strong ensemble numbers.

Cinderella herself is played sweetly by Ekaterina Bulgutova, but perhaps doesn't get much opportunity to fully show her skills until the second act. Much of the early part is taken up by the storytelling, that the ballet is kept surprisingly simple. It's worth noting in fact that we don't see that distinct and most familiar en pointe until almost half an hour in. 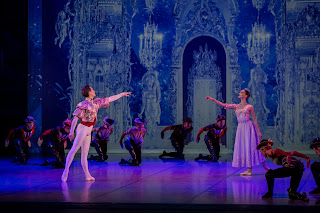 This is not to say that the early parts disappoint, there is great fun to be had from the scenes with the Stepmother (Pavel Kirchev) and stepsisters (Anastasia Osokina and Perdita-Jayne Lancaster) creating an immense amount of humour from the characters. There is an issue that this and some of the choreography becomes slightly repetitive, the feeding scene, for instance, is effectively just repeated in the second act, and feels there just as a filler.

It is perhaps not until the second act that Cinderella totally flourishes properly, and the increased response from the audience highlighted this as well. Perhaps the biggest effect of this is the arrival of the Prince, performed by Yury Kudryavtsev, the absolute star of the show. His flourishing arrival and opening dance sequence is the highlight of the production, and later in his partnership with Bulgutova, he clearly brings out the best in her as well, with the choreography allowing them also to show their significant skills much more. 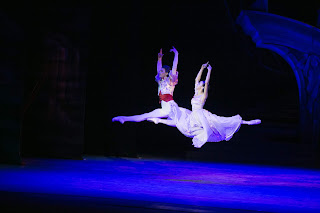 Elsewhere the work of the ensemble is good, if on occasion a little distracting, where it would be just nice to concentrate on the principals, and there are more than a few occasions synchronicity is lacking. Music is brought to life with Prokofiev sounding glorious under the conduction of Anatoliy Chepurmoy and his superb orchestra.

The Russian State Ballet of Siberia is clearly a talented group and this is an excellent little touring production well worth catching for a first dip perhaps in the ballet world, or a continuation of one. They present the Snow Maiden this evening (Tuesday) at the Royal & Derngate and tomorrow The Nutcracker before continuing their 2019 tour.

The Russian State Ballet of Siberia performs Snow Maiden (8th January) and The Nutcracker (9th January) at the Royal & Derngate, before continuing it's tour.