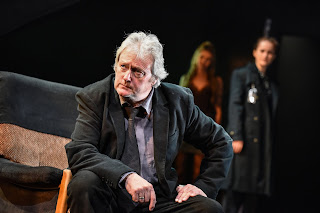 Ian Rankin's John Rebus has been stalking the underworld of Edinburgh for over thirty years now in both his novels and various TV adaptations. Here though, with an adaptation by Rona Munro, the, now retired, detective, takes to the stage for the first time, and even to this reviewer, slightly lacking in knowledge (I have read the first two novels a long time ago), it proves an entertaining, if slightly unfulfilling evening at times.

The story of Rebus: Long Shadows unfolds following a chance encounter with a young girl on his tenement stairs, the wounds of two unsolved cases of murdered girls open up in Rebus' mind, leading to encounters with old colleague Siobhan Clarke, and recurring nemesis 'Big Ger' Cafferty. 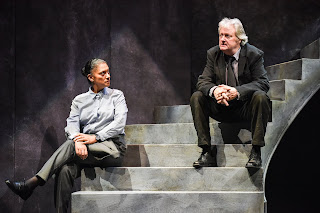 At the centre of this whole production is a superb dominating performance by Charles Lawson, depicting the grizzled, weary drink swigging detective with huge skill. His whole demeanour embodies the nature of the character, from his voice to his gait and onto his movement. He lurches smoothly from rugged, violent and hugely witty in the delivery of the often very funny script.

John Stahl meanwhile gives an even better performance as Cafferty, viciousness dealt in an almost friendly nature, he towers over everyone else with ease, in both size and indeed power, as he observes Edinburgh from up high in his apartment. It a tremendously strong performance delivered with panache. 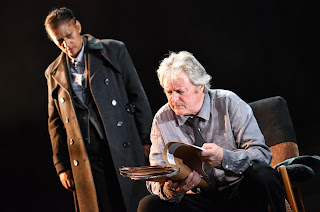 Cathy Tyson however for me gives a tremendously odd performance, the character itself seems poorly created here, and her delivery like some sort of train station announcer puts no light and shade into the character. I know that she is excellent, her CV shows that, but here, I really found nothing to like from her performance at all.

Neil McKinven though gives excellent support, depicting five characters throughout the play, making them all so believable that at times I thought there was an actor I had missed in the programme. Superb work. 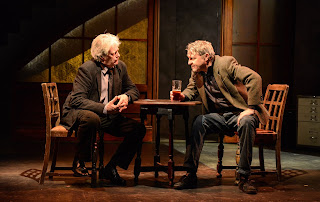 Ti Green's set is slightly less successful than her monumental one seen in a recent production at the Royal, Touching the Void, and ends up having excellent flourishes when it becomes a bar, pub or Cafferty apartment, but elsewhere, and throughout the entire show, the vast sweeping stairs impose a little too much on proceedings much of the time.

The set also fails to adapt to the Royal stage as well, clearly designed for bigger venues, a few areas of the original blocking from director Robin Lefevre are hidden from side sections of the audience, especially in Rebus' flat when activity by his filing cabinets disappears from view of one side of the audience. Lefevre also has a habit of long sequence of limited movement, including the first meet between Rebus and Clarke, a very long scene, filled with a lot of exposition, and lacking in drive, and some overly long segments with actors with their back to the audience. Also for a while, the whole play fails to prove to its audience that it is a stage play, with this easily feeling like a TV episode in itself with the camera barely needing to move. 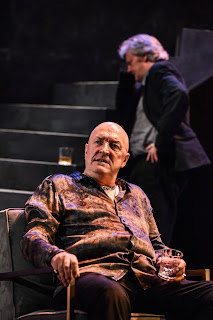 Thankfully it improves, and much of the grasping of a theatrical experience comes from the handling of the two dead girls by the director. Both are excellently performed by Dani Heron and Eleanor House, with their overshadowing of the troubled Rebus upon high, and excellently brought into the role of stage managers. Their seamless nature in this is highlighted in the one scene where the scene change is not the sole responsibility of them when we arrive a Cafferty's apartment. The scene change, while quick, feels clunky as a result of how well everything else is done. Elsewhere there is some lovely atmospheric lighting from the late Chahine Yavroyan and Simon Bond which very much evokes the long shadows of the title upon Ti Green's predominantly black set.

Rebus: Long Shadows is always entertaining and keeps interest, although the plot is very much a sideshow to the characters created. Munro's script from Rankin's original does enough to bring an audience unfamiliar with the world of Rebus into it without becoming too much of a frantic crash course, however, I do suspect that fans already of Rebus, in either form, will gain the most from this opportunity to see those familiar characters upon the stage. Entertaining, but never more than a slightly joining the dots production.


Entertaining, but generally just a joining of the dots production.
⭐⭐⭐