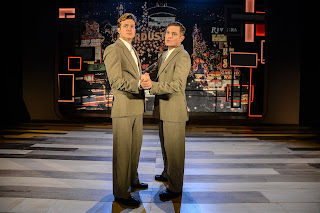 The arrival of another stage adaptation of a classic film is beginning to set me on edge now, such is the bounty of them travelling across the country. However, unlike many of them, this and the previous works of The Classic Screen to Stage Theatre Company's work, isn't a musical version as is most audience-pleasingly common, so, at least at the initial stage, this feels less forcing of the current trend.

Rain Man, starring Tom Cruise as Charlie and the Oscar-winning Dustin Hoffman as the autistic Raymond, was a 1988 film depicting the journey of discovery of an unknown brother, sent away by their cruel father soon after the death of their mother. After the father dies, Charlie learns of his brother and the fact that the $3 million inheritance has been left to that unknown brother. Kidnapping Raymond, they set off on a voyage of discovery of lost child and adulthood, and the power of family. 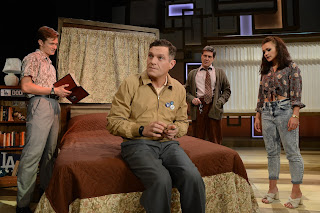 There are some great, if not exemptional performances throughout Rain Man, some of the time perhaps there is a little too much force, slightly exaggerated acting going on. The colours in the performance are a little bold at times, with Ed Speleers as Charlie a little too forceful initially in his attempt to paint how loathsome his character is. It's not until we see the tender side of his character much later, that Speleers is allowed to show his true ability. The dance scene is, therefore, one of the best of the play, played softly with great care, likewise his earlier bedside conversation with Elizabeth Carter's Susan.

It's perhaps clear though that Mathew Horne is the one saddled with the greatest challenge, not only following in the Oscar-winning footsteps of Hoffman but also a genuinely challenging role to recreate on stage especially. Raymond suffers from the greatest form of autism, and this is now the lesser seen depiction of the disorder. Understanding of autism is far from what it was when this film originally came out, and there is greater knowledge of the various levels. We now live in a world where the likes of A Curious Incident of the Dog in the Night-Time has given us new perspectives on it. 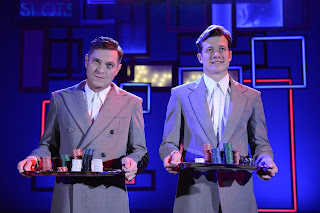 Here though director Jonathan O'Boyle and Horne create the original, extreme version of Raymond, key not only to be faithful to the original, and also for its relevance to make the path of the story of this brotherly relationship work. Horne is excellent in capturing this, a challenging verbal and physical performance, he embodies the character, shuffling awkwardly, rocking constantly when standing, and an adept way of constantly shuffling cards during scenes. This is as much a physical performance as a clinically accurate vocal one. I also delighted in the fact that even during the blackout scene changes, Horne maintained the physical movement. A genuinely excellent performance. 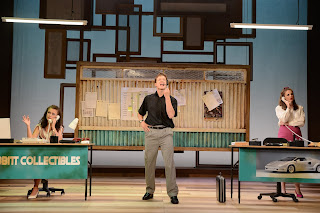 The supporting cast, very much so in this tale mostly of two people, offer good support. Carter does all she can with the limited role, however, she and Maira Barclay (playing three roles), bring a wonderful vibrancy of interaction to the opening scene, which they never really get to do again sadly.  Neil Roberts as Dr Bruener and Adam Lilley as Dr Marston work well together also in the concluding scene.

Rain Man is at times a little simplistic in its staging, and while Morgan Large's set is pleasing, it is at times very plain, consisting of three columns either side of the stage (reminiscent of an old square TV before curtain up), and a waft of furniture and door frames. There is, however, a nice collection of floating frames at the back of the stage, nicely lit at various times, which manages to give a pleasing aspect to the backdrop, although Las Vegas itself might have looked a little more glamorous than the flat image used, and the lighting upon it. It is also more than disappointing that for all its importance in the story, we never at any point get to see the Buick Roadmaster depicted in any way. 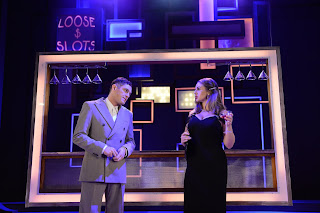 Scenes are switched nicely, mostly by the cast members, keeping the change of scenes fast-paced, indeed, here the delay of scenes restarting is the plethora of costume changes occurring, mostly for Speleers. It, however, never drags and the superb soundtrack selection entertains greatly in this area in any case.

I was wary of Rain Man initially, another cash in of a classic, like the endless reboots of many a classic film. However, while Rain Man maintains the setting, lifts chunks of original dialogue, it also brings something interesting to the stage worth seeing, beyond sitting and checking out the original on Netflix. While many aspects are dated in social comment and the role of woman in the story, Dan Gordon's adaptation always entertains and generates much of the emotion of the original film.