Review of Touching The Void at Royal & Derngate (Royal), Northampton 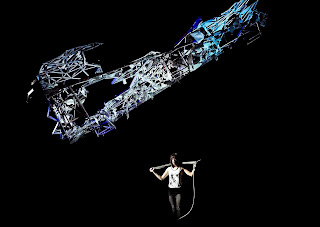 For those unfamiliar with this story, this review tells more than you might want to know ahead of seeing it. So, the short review for those who don't know the story of Joe Simpson, go and see this play and then come and read this review if you wish.

Staging the 1985 tale of Joe Simpson and his somewhat unbelievable, if it wasn't true, escape from surviving three days without food and water, a 150 foot fall previous, and following breaking his leg a previous, previous, seems an insurmountable challenge, but with the clever work of writer David Greig, director Tom Morris, and designer Ti Green and the rest of the creative team, we manage during a long and pulsating evening of theatre to reach that peak. 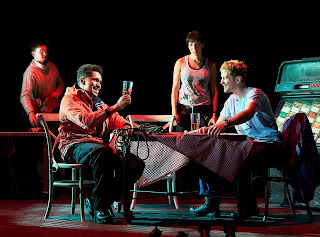 Following a short sequence of flashes of what is to come, we join Simon (Edward Hayter), Richard (Patrick McNamee) and Sarah (Fiona Hampton) at the wake of Joe Simpson, imagined for the stage and a neat way of introducing us to the story. Here Sarah, Joe's sister becomes the heart of the story as her despair at Joe's pointless death spills out in gushing expletives which might disturb more than a few. However, it feels justified, this is a death, that she remarks comes from doing what he loved, but that means nothing to those left behind, and most especially those that don't understand why they take these risks. There is though at this point a remarkable scene, a moment where Simon explains to Sarah why they do what they do. Staged superbly with the simplicity of glass, chair and table, a realisation of the power and intensity of why these "w****rs" and "c**ts" as she describes them, do what they do. It is one of the best scenes in the play, above and beyond some of the stunning staging that is to come. 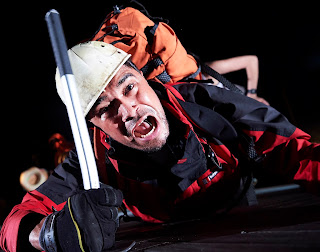 Each of the characters feels like they have a place, Joe (Josh Williams), the mountaineer heading towards potential doom, key to the story. Simon, the distraught climbing partner, left with a life-ending decision one way or the other. Richard, the gap year traveller, trying to find something in his life to write about, draws all the much-needed humour into the play. Then finally there is Sarah, the heart, our "in" as an audience member into the story.

Sarah for me is where much of the success of the play lies, she is perhaps a bolt on character, brought in to find a female dynamic into what is very much at times a man's story (there was no female input at all in the 2003 drama documentary and she is largely a small point in the original book). However, she becomes the most important character here, helped by a bolshy and feisty performance by Fiona Hampton. Her aggression mixed with sorrow in the first act, later becoming like a Native American spirit guide in the second, sitting in Joe's head and guiding him onwards, to the sad elephant, dancing nun and coffin, as the shapes of the rocks become. If anything it is somewhat disappointing that Sarah is stripped of a presence in the final scene. 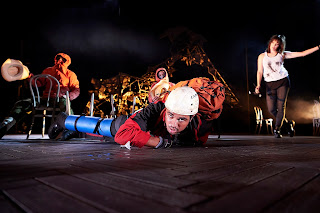 Josh Williams and Edward Hayter are both immensely strong in their roles, bringing anguish and distress into their performance, and upon Ti Green's remarkable floating and shifting set, are challenged with some very real climbing going on. Williams, especially in the second act, is given the unenviable task of believably portraying the pain he is at every moment Finally, as Richard, McNamee brings a brilliantly funny and nicely awkward at times performance (including a humorous moment of dodgy dancing).

There is also much to like of the surprising variety on offer, within this telling we get a couple of songs, some dancing, and even a little poetic moment. It never feels out of place, as the team strive to create both a very visual and audio piece of theatre. Perhaps at times, the effects and music offer too much intensity in volume, leaving some of the dialogue lost. However, this powerful music from Jon Nicholls and excellent use of Simpson's Desert Island Discs tracks makes it a very aurally nice piece all the same. 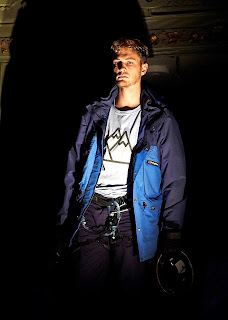 There are so many neat touches to this production that it's impossible to mention them all, and it would be cheating on future audiences to spoil them, however moments including one of the cleverest stage tricks I have seen for a while, to epic ascents and a magnificent haunted jukebox at the beck and call of the next music cue, there is so much to delight in.

It is tense throughout, even for those that know the full story, and loses nothing from that Titanic feeling of knowing what happens in the end (indeed, I managed to mix up my own recollection of miracle mountain escapades at one point, to be sideswiped myself). 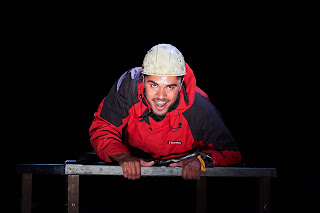 Touching the Void has many challenges to get past to stage such a remarkable story, however, this team have dealt with all of them to create an intensely captivating piece of theatre that leaves its audience reeling from the cries of help resonating through the theatre. Raw and emotive, it is one to catch either here in Northampton or on its tour.

Pulsating stage version of Simpson's remarkable story which reaches the peak with ease.
⭐⭐⭐⭐⭐