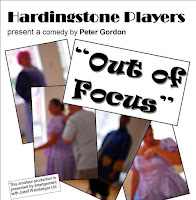 A bit over five years stalking the theatre world of Northampton and a little beyond has never oddly enough led me to the door of The Hardingstone Players. Last Friday though I finally rectified that as I saw the final performance of their production of Peter Gordon's farce Out of Focus. Never also having seen a Peter Gordon play, left me with an interesting evening ahead.

When an unfortunate over-booking at the Church Hall happens, a gathering of badminton players, brownies, pantomime actors and an odd exhibitor of slides collides into a chaotic and rather eclectic cast for this years pantomime, Super Cinders.

Presented upon an excellently created set by  Alison Roberts and Iain Hodge, the evening is set for introduction to a feast of odd characters, and this beyond everything is where the strength of this production lies. The performers had clearly gone to great lengths to make their characters as big and bold as the colours upon Cinderella's oddly shaped carriage. We have the brilliant Rachel Dobb as the nervy, "super" Evonne Duckworth, distraught at pretty much everything going on, and feeling responsible for it all. 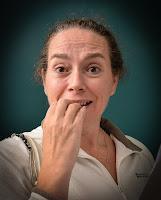 Then there is the officious, annoying and bossy brownie leader Helen Beever played with a delightful relish by Rhiannon George. A character adopted into the mind of the audience so much, that there was an audible cry of delight from the audience when she finally got her comeuppance.

Simon Wolfenden puts in his usual solid performance as the weird and socially awkward slide guy Leonard Trotter, happily stealing most of the scenes he appears in, making full use of one of Gordon's strongest characters in the play.

The larger than life characters are balanced well by a couple more normal ones (normal in the context of this play that is), who help balance out the farcical chaos around. These are played by Rebecca Mackenzie as Sue Dixon, and Richard Graham as David Wright, and they provide the perfect straight folk. Mackenzie especially has a particularly brilliant collection of startled and quizzical faces in response to whatever anarchy is befalling.

It is a crisp version of what is a very funny play. Director Alison Roberts keeps the piece pacy and even allowing for just a couple of prompts in the second act, the flow doesn't suffer. If I am to have one minor quibble with the direction, I perhaps could have done without the downstage positioning of the table for Leonard's computer. I was in the unfortunate position of the opened laptop blocking quite a bit of activity near the centre doorway. This positioned by one wall, would have had the same effect, but without the blocking.

I really enjoyed my first visit to see The Hardingstone Players, the group had clearly gone to great pains to make this funny farce a nicely polished production. While not perfect, this was an extremely entertaining evening out. Extremely well done.