Review of Duets from White Cobra Productions at The Playhouse Theatre, Northampton 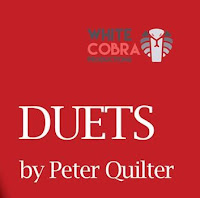 Hot on the heels of their award-winning production of Peter Quilter's Glorious!, White Cobra Productions turn to another of the writer's back catalogue for their very next production. It is easy to see why they should choose to do so, as Duets (a comedy about couples), is a stunningly well-written piece, formed of a quartet of plays loosely linked around the theme of love and romance.

What is very apparent watching Duets is the surprising strength of all of the pieces, there is no filler here to complete the four. Indeed a conversation after the show resulted in three people coming to the conclusion that we each liked a different one, and I have no doubt that in the bar there was someone who had the other as their favourite.

Each of the four segments also has a very different style to it, the opening play Blind Date revels in silliness and awkwardness to create it's comedy, while Secretarial Skills creates some extremely clever humour while also working to a very strong theme. After the interval, there is more relaxed comedy in The Holiday, creating a more conversational piece and with added moments of slapstick. Then finally with The Bride-To-Be, it all goes pretty much full farce. 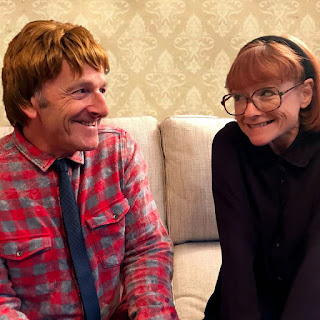 The contrasts work brilliantly as do all the casts, Blind Date rekindles the pairing of scene-shifters for Glorious!, with Bernadette Wood and Rod Arkle forming the awkward and uncomfortable but loveable two on a blind date. It's a lovely coupling, and the script keeps no secrets away from how these two are destined to live out their lives in the future. Wood as Wendy is a delight in her cheese baring awkwardness, with a superbly perfected weird laugh into the bargain. Meanwhile, Arkle, 37(?), and sporting the most ridiculous wig imaginable is a delightfully embarrassed Jonathan, his moment of realisation that love is indeed on the cards is a brilliantly played moment. 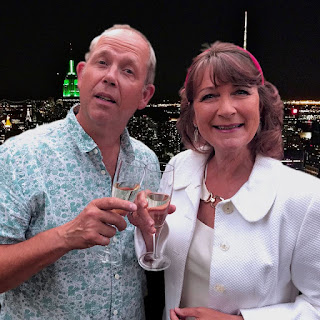 Secretarial Skills is, as mentioned, the segment with the clearly defined message, and while it maintains some brilliant comedy, which Fraser Haines as Barrie, especially relishes in, this is at its core though quite a serious section. Janet played at times with some nice understated sadness, by Kimberley Vaughn, is desperate to find "the one", and in her failing pursuit in her later years, looks to her homosexual work colleague to try to "convert" him to be that one. Sure this play is still full of comedy, a lot of really funny comedy at that, but the message is strong in this one, and for me, it is the strongest of the four plays. 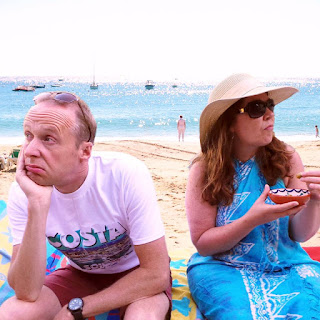 After the interval, things go back to being a bit more silly again as we meet Shelley (Kate Billingham) and Bobby (Mike Street) crashing back into their apartment in Torremolinos, taking a pre-booked holiday, with no cancellation permitted, as they finalise their divorce. Street has great fun in his stroppy moments, packing his Homer Simpson slippers and Doctor Pooh T-Shirt and leaving in a huff, while the, not drunk, but definitely drunk, Shelley is played in a brilliant larger than life way by Billingham. This segment is the most naturalistic in the conversation of the four plays and has some superb moments, including a neatly successful biscuit backward pass, well played if that goes right every night. The two work extremely well together making The Holiday, a riotous success. 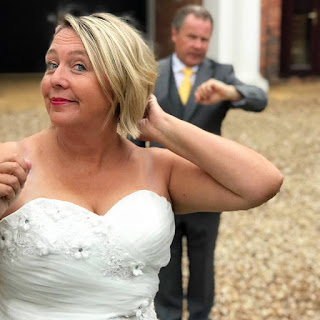 Finally, all moments of calm are gone as Duets goes full farcical chaos in The Bride-To-Be. Toby (Richard Jordan), all posh and very exaggerated characterisation and Victoria Miles as Toby's sister, and soon to be wed (again), Angela. It's a brilliant culmination to the evening, with both Jordan and Miles in excellent form and some pretty neat stage work going on, as more than one mishap happens upon Angela's wedding dress (and responsible for the biggest laugh of the evening, with one of Jordan's lines, wait for it and think falling through the sky. Classic!). It's not big or clever, but The Bride-To-Be is an excellent chaotic and very funny end to the evening.

Technically Duets also is extremely well created, with some brilliant soundscapes throughout the evening, Secretarial Skills, in particular, has a very neat, and unobtrusive, city sounds backdrop, while there is a neat creation of offstage party times in The Holiday.

Director Martin Borley-Cox keeps each of the plays free of any static moments and skillfully weaves each of the plays onto the same basic set. Except, not quite the same, as the clever scene changing of Glorious! is developed one step further into a song routine bridging each of the plays. Use of both the previous play actors and some brilliant unseen work from the crew off stage, each play becomes the setting of the next. It's a brilliant touch also that each of these songs is created very much in the characters of their play, or indeed a continuation of their play, The Holiday a prime example of this especially. Once again, as someone who shudders at long scene changes, this is the way to do them.

Following the glorious Glorious!, Duets is another huge success of a piece for White Cobra. Peter Quilter's script is a delight from the start to the very end, constantly funny, but with wonderful touches of poignancy as well. And in the hands of this very talented cast, it once again becomes an evening of delight and continues what is now a very strong year for White Cobra Productions. Hopes are therefore now very high for Little Shop of Horrors which is just around the corner.

Duets runs until Saturday 6th October 2018 at The Playhouse Theatre, Northampton before continuing its tour. For details visit: whitecobraproductions.co.uk

For full details about the Playhouse Theatre visit their website at playhousenorthampton.com