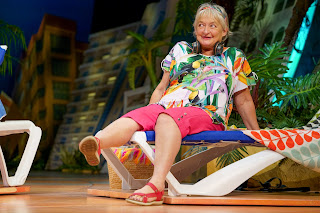 I arrived at Milton Keynes Theatre to see this touring stage version of ITV comedy hit Benidorm with a distinct lack of knowledge. Having never seen the show, my information stretched as far as knowing it was set in a holiday resort in Spain (the title helps there), and that the humour generally resorted to the cruder end of the spectrum. However, having graced the screens for ten years, it was clear that Derren Litten's show had garnered quite a following, and indeed it was clear from the reception of the audience on the night, that this following was pretty much filling the theatre. 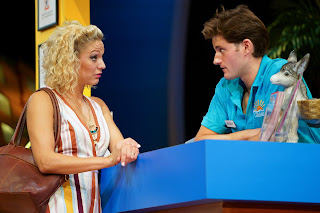 The plot, such as it is for this stage show, is very much drafted from an episode of Fawlty Towers, and made a great deal more adult with its humour. The hotel manager, Joyce Temple-Savage (a sharp performance by Sherrie Hewson) gets wind that a hotel inspector is in, and the scene is set for seeking them out and all the obvious cases of mistaken identity. It's thin and doesn't fill the show, but this mostly doesn't matter, as this show is mostly about the characters.

The cast consists of six from the original series and a collection of new ones to flesh out both the requirements of the production and its loose plot. Those not aware of who the original cast is, are easily alerted by whoops and applause from the audience when they make their entrance. It's something that I could have done without, and best left in the pantomime environment. 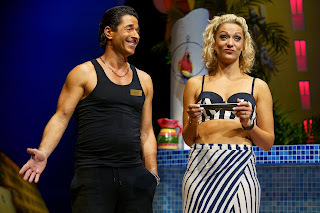 The first cast members we meet though are a few new ones, as married couple Sophie (Tricia Adele-Turner) and Ben (Bradley Clarkson) arrive and are welcomed by equally relatively new staff member Ricky (Will Jennings). All are excellent and do their best with the slight material that they are provided with. Not being original characters has left them with less rounded characters and don't have the same warmth coming from the audience at first. Adele-Turner is delightfully bitchy, while Clarkson is generally the soft, at heel, husband (and neat calm covering of a costume issue on the night as well). Jennings brings great humour to his scenes as well with his deliberately high-pitched Spanish accent. 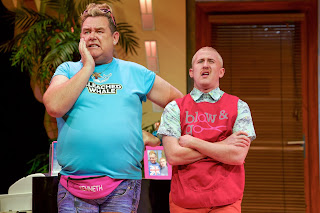 The original actors are all clearly having great fun bringing their TV personas to the very different environment of the stage. There is excellent repartee between larger than life hairdressers Kenneth (Tony Maudsley) and Liam (Adam Gillen), who performs very much an "unforgettable" moment especially. Shelley Longworth as Sam is given much less to do, especially in the first act, but her moment and an excellent singing voice come to the fore when the play goes full showtime in the second act as the plotline is mostly jettisoned as we reach Neptune's Bar for the evening entertainment.

Jake Canuso as Mateo also has a limited amount to do other than look handsome, which I guess is mostly his role anyway. However, he provides some great dance moves (much what he did before Benidorm, it appears from his biog), and sports a suspiciously bulging pair of speedos at one point. If it really is shaped like that, I recommend seeing a doctor for likely hernia diagnosis. 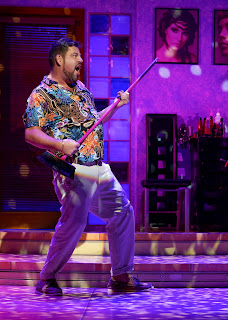 Elsewhere, probably the strongest of the new characters is Damian Williams as (gay) Derek, in pursuit of Kenneth. Williams is a brilliant stage presence (he has been a pantomime Dame for over thirty years and was an impressive Edna Turnblad in a previous Hairspray tour), and also features in one of the strongest scenes in the show, when he presents his undying love for Kenneth in song. Once seen, never forgotten.

Musical numbers, of which there are a few, as this attempts to be part-comedy and part-musical, are generally performed by Asa Elliott, playing himself. Asa's greatest fame it seems, beyond Benidorm, is appearing as Bobby Vee on Stars in their Eyes back in 2004, which actually is quite a shame as he has a great stage presence, delivers his numbers with nice charisma and has an excellent voice. His Bobby Vee moment of performing Rubber Ball, however, is gloriously stolen by Janine Duvitski as Jacqueline. 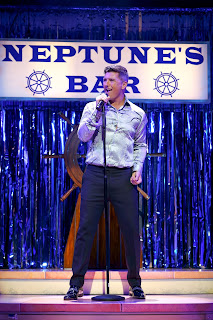 It has to be said though, that much of the show is stolen by Duvitski and her character of Jacqueline, clearly the best one in this production. Her character and her swinging interest creates most of the humour, and clearly the rudest aspect of it, and easily overshadows the generally lightweight storyline. Juvitski is brilliant as well, showing why she has been in the business well over 40 years.

Mark Walters brilliant set evokes all the cartoonish aspect of Benidorm as well, from its initial welcoming backdrop of the entrance doors of the hotel surrounded above with tiny representations of the windows and balconies. Also stripped either side are lovely distorted hotels as well. A revolve, implemented in the first act easily switches us from location to location, and despite this relative good speed of change as a result, director Ed Curtis and choreographer Alan Harding still fill this brief moment with random little dance routines from the hotel staff, to stop any interest waning. Harding's work in this is actually very likeable, scenes of dance have a lovely entertaining feel, and make their mark early with the dance routine featuring Canuso and Adele-Turner and the gentleman cast. 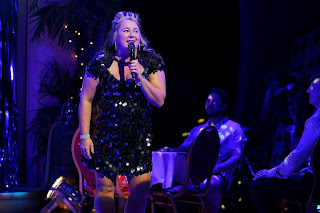 Benidorm Live is not high art, it isn't meant to be. However, if you can stomach it's generally just crude humour (there isn't much else to offer here, it is never subtle), you will be in for a highly entertaining evening, albeit slightly short at barely two hours including the interval. It offers something for fans, as was clear from the audience, but also equally as important, it also offers something for those new to the show like myself, as the characters and environment instantly appeal. A very enjoyable evening. 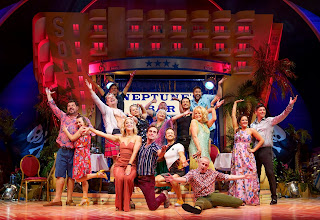