Review of Shrek the Musical at Royal & Derngate (Derngate), Northampton 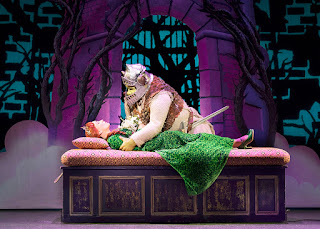 When Shrek the Musical rolls into town, it arrives in seven great big lorries, and this actually says a little as to where the strength of this production, now well into its UK tour, lies. This show looks spectacular in every way, it might be the best looking and the biggest tour show you will have ever seen. However, at times, this spectacle feels a little superficial, as you feel more thought could have been put into the original writing.

Shrek the Musical mostly follows the story of the original 2001 computer-animated film, which sees ogre Shrek's swamp overrun by fairytale folk, which results in him confronting the evil Lord Farquaad, which then results in him going to rescue Princess Fiona, as you do.

What feels missing though in this musical (book by David Lindsay-Abaire and music by Jeanine Tesori), compared with the film, is the clever balance for children and adults alike. This nearly always feels targeted more at adults, there is a lack of humour that feels just right for children, even the famous fart and burping jokes don't really make an impact until Shrek and Fiona perform I Think I Got You Beat in the second act. And I definitely never thought I would complain about a lack of fart jokes.

The songs also generally feel grown-up, and very often quite worthy in manner. They certainly run the full gamut of influence, as Shrek tries to be, during its two hours or so, every musical you have ever seen. Throwing in nods to everything from The Lion King and Les Miserables and a bit of tap dancing as well, it all leaves it feeling that it is trying to be a musical catalogue, rather than its own thing. 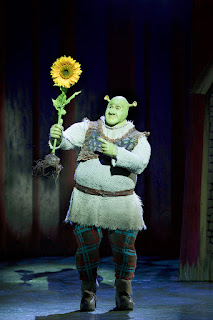 However, negatives aside, as well as looking sublime, this is an exceptionally well-performed show. Steffan Harri as Shrek is jolly and likeable, and full of enough character to make the show flow. Portraying emotion from under a mass of green and prosthetics could be almost impossible, but Harri does the job well, it's just a shame that the character is sadly one of the duller written characters, considering he is the lead.

Much better realised is Princess Fiona, and Laura Main is superb as the awkwardly postured character. Hunched over often, and cleverly hiding her other form through a glorious collection of slightly masked facial grimaces. She also holds a tune, and has one of the most buoyant songs of the show, in Morning Person.

Marcus Ayton distances himself from Eddie Murphy's Donkey, bringing about a different camp and cool world to the character, and genuinely making him quite entertaining, if a little annoying at times, although, that is the point.

Finally, of the four leads, is both the character and performance that just blatantly steals the entire show, that of Samuel Holmes as Lord Farquaad. A physically brilliant performance, a clearly sung one, and a comically timed one of perfection makes the role a brilliant one in itself. This coupled with the fact that he has the best lines, the best creation and many of the best songs, and you have a character that you don't wish to leave the stage. The show is all the better for Farquaad, and when he is not there, the show is always weaker because of it. 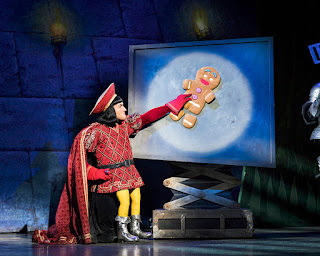 It's a vast criticism of the show really, that they have stacked it all on the shoulders of one character, and whenever he is around, it is a five-star feast of hilarity and brilliance, which deflates everything he is absent from.

For a musical, there is a distinct lack of catchy numbers (Story of my Life is pretty much as good as it gets), they mostly strive for comedy, rather than being really well-remembered numbers. They tick too many boxes of styles from other shows, and as a result, you leave with the fifty odd year old I'm A Believer in your head, rather than anything written for the show.

Technically, Shrek the Musical is an incredible beast. There are some brilliant projections, clever special effects, the Gingerbread Man is great, but it's a bit of a shame that the controller is also the voice, making it all a little silly in a peekaboo nature. Add in some very Avenue Q puppets, and a tremendous dragon, that is a stunning bit of stage work, and you will definitely get enjoyment from the show in that respect.

It is though a shame that this isn't a better-written show, especially to give more to the younger members of the audiences. However, the enthusiasm of both the excellent cast, this has a very strong cast for the minor roles, and the energy from the audience, who do definitely try to get into the show, help it still become an entertaining night out, but perhaps not one you will remember in the years to come.


Entertaining and visually superb, but a little shallow in some parts of the swamp.
⭐⭐⭐½ 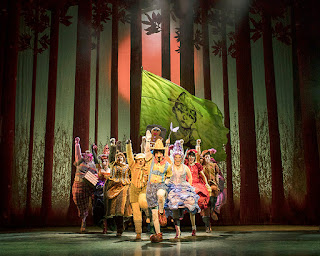