Review of The Pirates Of Penzance performed by the Northampton Gilbert & Sullivan Group at Royal & Derngate (Royal), Northampton 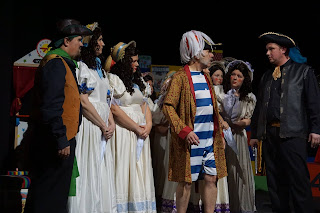 I did a little research unusually before seeing this version of The Pirates of Penzance from the Northampton Gilbert & Sullivan Group, and one thing I found was the over eight-minute Overture. Would we be presented with the full deal at the start of this production, I wondered? As it turned out, yes we were, thankfully I am not afraid of the dark. I did try to imagine though what the audience of Shrek, on next door this week, would have thought, being faced with this. How times have changed.

The Pirates of Penzance is if you have ever seen a Gilbert & Sullivan operetta before, more of the same. They don't really vary, I have learnt from my previous three viewings, the scenery changes, but it all remains the whimsical story of abject silliness. This time featuring pirates, in Penzance, and the many daughters of a modern Major General.

Pirates is perhaps the most well known of Gilbert & Sullivan's works, and on the evidence of this, by far the most accessible for a new viewer. Even the brilliant set (designed by director Leon Berger, and constructed by Sarah and Simon Crask), leaves a relaxing feeling of familiarity, it forming a children's playroom, littered with toys of yesteryear, comics adorning the walls, and walls made from giant lego pieces. It's a brilliant concept, which is expanded upon going into the clockwork policemen and the stick horses for later scenes. The whole visual appeal, in general, is actually excellently done. 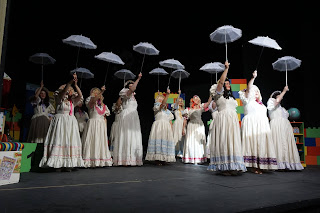 Performances are also generally very good, there is great work from Simon Crask as The Pirate King and Tom Pearson as Frederick. Both providing good vocals for the challenging songs, but perhaps stronger in their characters, bringing them both to life in a buoyant lively style.

There is some devilish fun to be had also from Susan Drake's Ruth, again channelling much of what made her hugely entertaining as Lady Jane last year in Patience, great humour once again. There is some great support from Alison Mead, Hannah Crockatt and Jessica Revitt as the daughters Edith, Kate and Isabel, all creating very different characters in their own rights, but equally supporting one another in their nice choreographed scenes.

However, there are a couple of standout performances, the first of which is Paul Darnell as the quite brilliant character Major-General Stanley. Immediately causing a scene from his first inflatable arrival, he provides enormous fun with the over the top character. He delivers the challenging Very Model of a Modern Major-General with aplomb, bringing this classic fully to life. 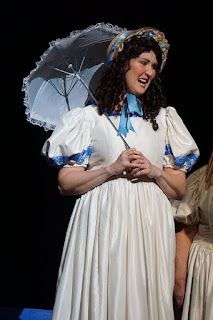 Finally though is Rachel Bedford as Mabel in a startling vocal performance, she has been the incredible strong point in two previous shows, and here is no different. Right from the stunning delivery of Poor wand'ring one, she delivers some incredible numbers and is every bit the star turn.

Technically this opening evening went reasonably smoothly, although there were clearly a few issues with spotlights and the lighting on occasion was extremely dark, even allowing for mood in some scenes. However, it was otherwise extremely successful and scenes were reasonably well controlled and staged, even when the large cast were all on stage, which meant it a little cramped at times.

Gilbert & Sullivan, I know is not for everyone, they form a curious bridge between proper opera, comedy and musicals, that is definitely niche. I enjoy them very much, despite the fact that they all appear to be extremely similar. Here the group, with very well known Pirates, with its familiar tunes, are offering perhaps the best way to discover if you are a G&S fan or not if you have not witnessed its strange world before.

The Pirates Of Penzance runs until Saturday 24th March 2018 at the Royal & Derngate. 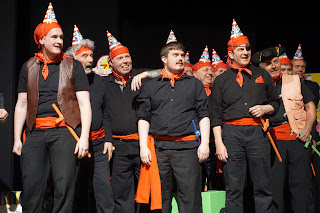