Review of Woman In Mind by Masque Theatre at The Playhouse Theatre, Northampton 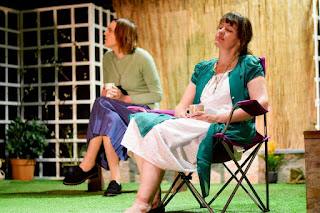 I like Alan Ayckbourn, I may only have seen a few of his vast array of plays previously, but all have been a delight, often crazy yes, but constantly funny, and especially in the second act spiralling often into just on the very edge of believable nonsense. With Woman In Mind, acknowledged by many as one of his finest works, my own personal jury is very much out on whether I liked it or not.

What was very good, mostly, however, were the performances, most especially the two that we are introduced to at the very beginning. The prostrate Susan (Nicola Osborne), with sinisterly lurking rake alongside her, and the bag struggling doctor, Bill (John Myhill).

Nicola Osborne has the unenviable task in this play of never leaving the stage, a feat in itself. Add to this the constant weaving of the character's world (more on this later), and you have a role featuring some significant challenge, one that Osborne ably surmounts. I once described Osborne as a "safe pair of hands" in a review (Antony & Cleopatra), and at the time it was received with mixed feelings I felt. It was though, totally meant to be a compliment, and here in Woman in Mind, I see it enforced even more. Throughout a two-hour play, she is assured and confident and you as an audience member feel relaxed about the situation because of this surety. 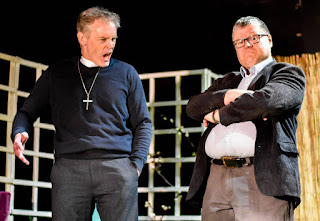 Myhill meanwhile is as always a bundle of fun, full of breezy carefree character from his opening beginning of spouting gobbledegook, and onto the buffoonery and accident-prone nature of Bill (it looks like a toad to me). He steals every scene he appears in, and that isn't just because it's a brilliantly classic Ayckbourn character.

At the other end of the fun aspect, and perfectly balancing that fun, is the generally horrid Gerald (Martin Williams). Caring far more for his epic 60-page history of the parish, than his clearly unwell wife, Williams delivers the vicar with relish. It's a thankless role, but often these are the challenge to make work in a fun, yet challenging play such as this, and he achieves it superbly.

Ciaran Redmond presents a nicely understated performance as the wayward son Rick, back from his world of sect life in far-flung Hemel Hempstead (it got a great laugh both mentions), with some rather important news of his own.

Completing the "real world" is Gerald's sister Muriel and described by Ayckbourn as "tall, dark, angular in a rather firm sort of way". It is the perfect description of Megan Lucas in the role, as a minor hubbub in the audience of those in the know knew before her stage entry. In this, Lucas' first proper acting role, she brings a perfectly judged creation of the cooking disaster character, so utterly underplayed that every nuance of comedy is eked out.

Beyond the real-world, we have the imaginary one that forms the backbone of the play, created before us through the eyes of Susan. This is where I myself had the biggest issue, as two of the performances didn't really grab me as I felt characters created in someone mind should behave. Sure, both Andy Rowe and Sion Grace as "husband" Andy and "brother" Tony respectively, are saying the right words of a fulfilling family, and then later a little more sinister as the undercurrents begin to emerge, but I have to be honest, for the best part, I felt the characterisation was just a little, well, dull. 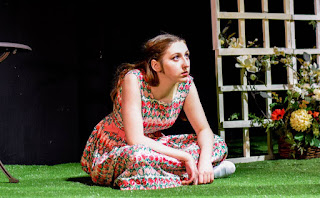 The only one of the three fantasy world that I felt captured the style correctly was Emma Burgess as the daughter Lucy, as much from the ethereal nature of the brilliant scenes of just watching what is happening, as her dialogue. She presents a stalking nature, even while just sitting on the floor, and makes those scenes all the more captivating and sinister as a result.

Staging is mostly nicely handled on a very nice looking set from Mark Mortimer. There is one curious scene in the second act between Williams and Osborne, where it could have been handled a little different to make it less awkward for the latter. Also, my silly irritation meter went off a couple of times during the play when there were two scenes where odd sets of mugs and glasses were used, which jarred a little.

I remain undecided to this very moment whether I like Woman In Mind, it's very different to the other Ayckbourn's I have seen, so that is a positive in many ways. I also appreciate the message that it is trying to get across, although I am not really convinced that it is saying much about mental illness, as is often suggested, but more just the potential short-term event of a head trauma. I liken it to the moment a rugby player gets up from a knock on the head and stumbles about not knowing which way the team is playing, rather than anything deeper.

It all ends rather chaotically, and while the very final moments from Susan strike a poignant feeling, I can't help but feel the rather weird second act didn't achieve the potential of the first. It's a curate's egg of a beast, and for that very reason, it's worth catching just to see which side of the garden fence you belong.

Woman In Mind runs until Saturday 17th February 2018 at the Playhouse Theatre, Northampton. 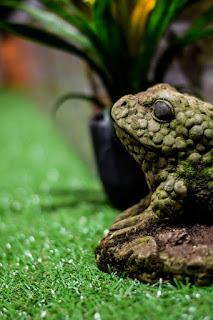