Review of Agatha Christie's Love From A Stranger at Royal & Derngate (Royal), Northampton 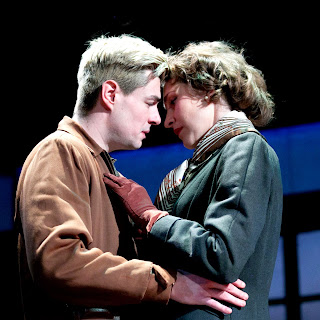 I have to confess that I am a huge fan of the little mysteries of Agatha Christie, however, I also confess that I have read very few of the novels. My love comes from the various screen versions, growing up through the eighties, there was always the comfort of a good old fun little murder going on, that Joan Hickson, aka Miss Marple (random fact, Hickson played the cottage maid in the original 1937 film version of this play) or David Suchet, aka Hercule Poirot, would breeze into the middle of, and by the end of the hour or so, have cornered the guilty party in front of an assortment of all very potential suspects. They are frivolous in theory, but pull them apart (as fellow reviewing blogger The Real Chrisparkle is want to do in his Agatha Christie Challenge) and you realise that you the reader/viewer are observing a cleverly created spiders web of intrigue, where on closer inspection, all the threads lead to the big, bad, murderous spider at its centre.

Love from a Stranger adapted by Frank Vosper from Christie's original 1924 short story Philomel Cottage, has many of these threads going through it, far more probably than a theatregoer would perhaps notice on one viewing, in fact. It's not a traditional murder mystery and features none of her famous creations, but it offers a slowly boiling psychological thriller, that still has all the lightness of Christie and her strong characterisation at its heart.

Cecily Harrington (Helen Bradbury), who plans to break off her impending marriage to Michael Lawrence (Justin Avoth), meets the mysterious Bruce Lovell (Sam Frenchum), who comes by Harrington's Bayswater flat with the idea of renting, and thus the seeds of a mystery are laid. As it turns out, it is a pretty clever one, weaving enough ideas into the mix, to leave perhaps even the most clever of audience sleuths certainly a little unclear to everyone's motives.

The stately Bradbury is divine in the role of Harrington, oozing with the perfect fifties period look (this is a very well dressed production, it has to be said), and managing to portray the character's uncertainty over the crazy pace that events are happening in her life, in a very convincing way.

The cause, of most of the events, of course, is the mysterious Lovell, home after travelling to the colonies, well everywhere really. Frenchum cuts a fine figure as Lovell, sinister enough to offer suspicion in the audience, as they try to see the path of events, but also charming enough to make it believable that Harrington, could indeed fall for him in a single afternoon. For someone with such little stage experience as Frenchum, he makes a very fine leading man, and one of much mystery and, yes, creepiness. Director Lucy Bailey comments in the programme that the 1960 film Peeping Tom offered much influence in this version of the play, and as Lovell caresses Harrington's stockings and takes snaps, yes, you can truly see that influence. 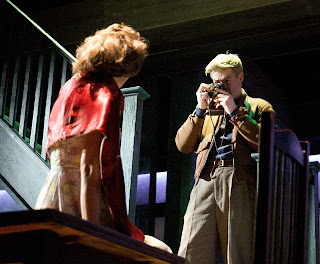 Elsewhere in this production, there are some more of Christie's brilliantly created characters, no more so than Louise Garrard (Nicola Sanderson) and Ethel (Molly Logan). Both of these characters are typical Christie and are fed all the comedy moments of the play, and these are truly funny moments. Sanderson plays Garrard with a gentle buffoonery, both clumsy and scary in equal measure, willing to turn on Lovell quite physically, but always playing it for laughs. Logan meanwhile is a delight, bouncing around the set, from doing the waltz with a set of step ladders, to crashing across the stage with flowers, it's a great comic turn, and she also has quite a bellow on her.

Beyond the splendid acting (from all), director Lucy Bailey and her team have created a rather brilliant production as well, from the brooding, not quite music, audio that permeates through the auditorium pre-show, to the snapping act opening moments (do I like snap blackouts, especially if there is a brilliant sound cue as well), the whole spectacle is really rather polished. Lighting from Oliver Fenwick is subtle, and then all of a sudden not so, as Lovell takes one of his prized snapshots. Music from Richard Hammarton broods in the background, stirring intrigue at all the right moments. 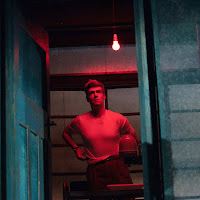 And then we have the set from Mike Britton, gorgeous to look at, perfect in the period detail and then it does its neat trick, creating set changes of the most brilliant invention. No audiences gasp at set changes (unless it's the sighing, expiration kind while looking at their watch), however, Love from a Stranger got that. At curtain call, I personally wanted the set to take a bow, and perhaps it might even have been able to do so if it tried. If there is perhaps one minor criticism that I could have levelled at the set, is that for most of the show, it is a little widescreen in nature, however, it does allow that little extra moment in the second act because of this. However, production wise, this is one classy show, and perhaps very in keeping with its classy fifties setting as a result.

I genuinely loved Love from a Stranger, it is not big and clever, at its heart, it is actually quite a quiet show, and if I can use a word like it for a thriller, cosy. Like laying under a warm blanket, watching an old repeat of a Christie or Midsomer Murders episode, on some obscure channel on a Sunday afternoon. It's probably not the best play that I will see this year, but I doubt that at my heart, I will just enjoy two hours of theatre quite as much as I had watching this production.

Love from a Stranger (Royal & Derngate in association with Fiery Angel) is on a long 17 stop tour after it leaves Northampton, so, you have no excuse, not to catch this excellent show.

Love from a Stranger runs at the Royal & Derngate until Saturday 17th March 2018 before going on an extensive tour. Tour details at http://lovefromastranger.com/ 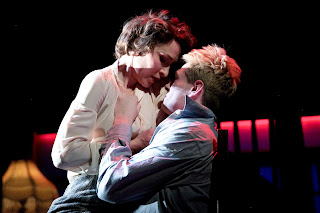