Review of The Play That Goes Wrong at Royal & Derngate (Derngate), Northampton 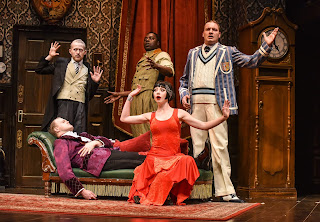 It is scary to contemplate that it is almost four years since I first saw Mischief Theatre's The Play That Goes Wrong. It is no secret that on that night I enjoyed it quite a bit (and ended up on stage, but that is another story). I returned the next evening to watch it again and then stalked it down to London later that same year, which over three years later it continues its remarkable West End success story. Since my last encounter with this original, I have seen Chris Bean's ramshackle Cornley Polytechnic Drama Society create chaos on stage and television with Peter Pan Goes Wrong, mess-up Dickens' A Christmas Carol and even gatecrash BBC Radio at Christmas. This fourth encounter with the original The Play That Goes Wrong though, offers the opportunity to see it in the hands of a different cast for the first time. How can pretenders of the original creators shape up in this anarchic disaster of a play?

Actually, as it turns out remarkably well. It is true that it did take a little bit of getting used to seeing these new people inhabiting the characters I knew so well. Who was that lady, for instance, pretending to be Annie? She didn't look the way I remember so fondly dragging me onto the Royal stage, (it was now Catherine Dryden, it turned out), and Trevor, let's say he had seriously changed on a scale that Sandra was going to as the play went from disaster to disaster. However, it didn't take me long to stop worrying about these new actors, as, unsurprisingly, Mischief Theatre have found some crackers to take their baby on the road once again (this was the second performance of a tour which doesn't stop until September).

At its centre is a brilliantly neurotic performance by Jake Curran as Chris Bean, he continues the nervous, edgy character, still unquestionably reminiscent of Basil Fawlty that was created so well originally, right down to his despairing and, still truly brilliant tirade at the audience during the classic ledger scene, "this is not a pantomime".

Elsewhere there are no grounds for alarm in any of the other characters, Trevor maintains a chaotic edge of not having a clue and actually, new performer Gabriel Paul brings a new, cooler dynamic to the role, suave Trevor, I like it. Benjamin McMahon perhaps of all the characters remains the closest visually to the original as Dennis, and shows great timing in all of his failure's as an actor and his lack of pronunciation, still providing many of the best moments of the play.

I particularly liked the new Robert and Sandra, the pompous pair who clearly think they are better actors than this disaster of a company deserves (but clearly not). As Robert, Kazeem Tosin Amore brings a nice sophistication to the role, and he is clearly an actor with the presence that Robert himself can only dream of. Elena Valentine's Sandra brings all the glamour and crazed acting ability required for the role to the fore. In a part that often just consists of posing, strutting or acting far too loudly, Valentine brings everything required. These two also have some of the most physically challenging aspects of the play to perform, so whether dealing with subsidence of set, or unexpected window withdrawals, they show exceptional physicality as well.

Everyone loves Max and his childlike desperation to please the audience and Bobby Hirston brilliantly creates this endearing love of him once again, keen to please in ever greater measure once his finds something that has entertained the audience, be it overperforming or something not remotely to do with the script.

Going off script leads me to still perhaps my favourite character of the play, that of Annie Twilloil, stage manager extraordinaire. In the original, Annie was played by the amazing Nancy Wallinger (now Zamit), so with big shoes to fill, Catherine Dryden steps into them and succeeds immensely. There is if anything an even sweeter nature to Dryden's performance that makes the character even more endearing and leaves the audience still perhaps on her side later in the show when things go a "little" crazy. I loved the new Annie, but I couldn't possibly say more than the original, however, fab.

The Derngate is considerably the largest venue that I have seen this play in, and while the need to bring it to a bigger audience is understandable, I did think a lot of the charm was lost in the bigger space. The set while looking spruced up for its tour and looking a little larger than I remember it, still fails to fill the vast open area of Derngate. The show does well in it pre-show entertainment (always take your seats early for this show) to bring everyone into the chaos, with even the upper circle not missed by Trevor and his teams hunting desperation. So, while this still works in a thousand plus seater, I feel that The Play That Goes Wrong is better suited to more intimate surroundings, the perils of success perhaps.

This was just the second performance from this brand-new touring cast, and while most things went rather well (if that makes sense), there were just a few moments where things didn't go right (and that is intentionally right). There were a few slightly unslick prop moments, which to someone who hasn't seen the show before wouldn't have spotted. However, for a show that relies on timing so much, this is all understandable and there is no doubt that this clearly extremely talented cast with have everything perfected extremely soon.

Having the chance to see this remarkable show a fourth time allows the opportunity to continue to witness a new audience experience it for the first time. Personally, I no longer get the tears streaming down my face and creasing up in the stalls (that's an uncomfortable place to crease) that I got on the first couple of occassions. My enjoyment has moved onto an amazing appreciation of the show and seeing the work of it's incredible performers in a new light, I sit ready and waiting for the next thing that I now know is going to go wrong and get excited for how people around me are going to experience that moment.

Incredibly The Play That Goes Wrong truly appeals to all ages, but equally incredibly, it doesn't appeal to all, I know a select, but very tiny few that didn't get ist broad, slapstick humour. However, there are few shows that I have recommended as freely as I have that of The Play That Goes Wrong. Also if you have witnessed Mischief Theatre's shows on television the last couple of years and been unsure of their appeal, let us be clear Mischief as the theatre, live, is an incredibly different beast and you should unquestionably seek them out as they travel the whole country on this tour which runs until September.

The Play That Goes Wrong runs at the Royal & Derngate until Sunday 7th January 2018 before embarking on a 36 stop tour. Details at http://www.theplaythatgoeswrong.com/uk-tour/tickets. 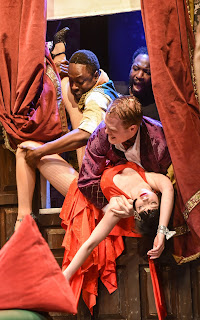