Review of A Passage to India at Royal & Derngate (Royal), Northampton 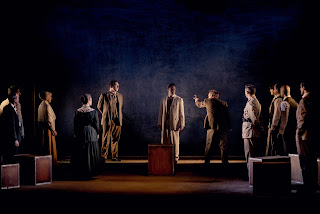 Creating the world of E. M. Forster's A Passage to India for the stage and into a little over two hours running time offers many challenges, not least creating the visual world of India. However, this co-production between Royal & Derngate and simple8 throw away any need for complex sets, and bring the world of India, including some of its wildlife to life via boxes and bamboo canes. The success of this is really quite amazing as perhaps the crowning moment of the elephant brings home the most. Simple8 is an award-winning ensemble group and the way they work together to get their characters travelling through the world of India explains why they have received the awards.

A Passage to India is a 1924 novel telling of Britain's generally unpleasant rule in India and takes as its story an encounter between the elderly Mrs Moore (Liz Crowther), Adela (Phoebe Pryce), who is keen to see the real India, and Dr Aziz (Asif Khan). While their meetings seem pleasant, to begin with, events change dramatically for Aziz during a group trip to the Marabar Caves.

Simon Dormandy's adaptation condenses much of the story into relatively short scenes, however, it
maintains and clearly defines the story it tells, never getting complicated for the need to keep the play moving. Here he has co-directed his own piece with Sebastian Armesto with a wonderful visual flair and some often brave staging decisions. Often characters perform pieces with their back to the audience or constantly in profile, however, while some of this might be frowned upon by traditionalists, it makes the piece much more natural as a result and never detracts from hearing the dialogue due to the power of the cast. Other decisions leave the performers who are not active sitting at the edge of the stage ready to return to action, and items like photographs exchanged, are figments of the imagination. The removal of these photographs and other props may also annoy some, so, perhaps it is wise, yet curious perhaps, that the plot-vital fieldglasses do have a physical presence on stage.

At the heart of A Passage to India is, of course, the ill-fated Aziz and he is brought to charming and heartwarming life by a superb performance from Asif Khan. While he is surrounded by an exceptional cast, it is Khan that drives the story and captivates the audience the most. Through his performance, we grow to love him and when we reach the events of the second act, we truly feel his pain, because of the strength of the character he has created.

Liz Crowther presents a wonderfully sweet Mrs Moore, bestowing her with both a twinkle in the eye and a mischievous air to the character and yes we love her mostly because here amongst some monsters representing Britain, she is one of the good people. Another of the good people comes from a strong but equally calm performance by Richard Goulding. as Aziz's truest British friend Fielding, holding firm against everyone else in his pursuit of the truth.

Edward Killingback is suitably repulsive as magistrate Ronny, the man who truly believes that the white man should not mix with the natives and goes as far as to never speak to the kindly Aziz. You hate him, truly, and Killingback makes you do so even more through his portrayal. In opposite to this is a scene-stealing performance by the Ranjit Krishnamma as the wonderful Godbole, mastering both brilliant pauses and a comically ingenious tale of the milkmaid.

Perhaps the true strength of A Passage to India though lies in the work of its ensemble, with just drapes, bamboo canes and boxes, we travel through India via train, that splendid elephant and into the deep caves, with cast creating these before us through some brilliant movement work. The ensemble also brings to life audibly the world with the curious echo via a stirring chorus, while some equally excellent work of visible musicians (Kuljit Bhamra and Meera Rajastage) stage left, creates some really stirring music, composed by Bhamra himself.

Much like The Grapes of Wrath last year at The Royal took an early twentieth-century novel and shook it with staging innovation (but in that case mostly got it all wrong), A Passage to India gets pretty much everything right. It doesn't allow the innovation to overshadow the story, it shows a respect to the original material and while there could at times be too many innovative and perhaps quirky ideas offered here for some, it remains a brilliantly staged piece of theatre. It is on a five-stop tour as it drives a passage of its own through England, and I suggest that you try to catch it if it stops near you.

An innovative, but successfully so reimagining of a classic.
⭐⭐⭐⭐
Performance reviewed: Tuesday 16th January 2018 at the Royal & Derngate (Royal), Northampton.

A Passage to India runs at the Royal & Derngate until Saturday 20th January 2018 before touring. 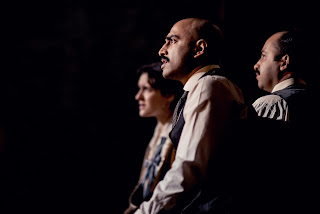