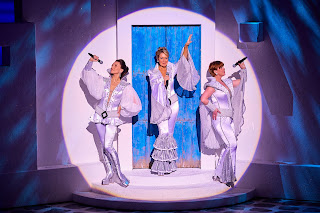 Ahead of my trip to see Mamma Mia! in Northampton, I had enough conversations about the show to discover that there appears to be no in-between with people over their love or hate of the work of ABBA (music and lyrics by Benny Andersson and Björn Ulvaeus). For your information, patient reader, I fall firmly in the love department and an audience member of Mamma Mia! like myself is always going to ride on a tidal wave of joy as this jukebox churns out an incredible selection of their numbers (and truly reveals a substantially great back catalogue, that even a hater could not deny), however, is the show they are weaved around actually any good?

The answer is mostly, yes. It is though, a typical popcorn musical where you are just required to switch your brain off for two hours or so and ride that tidal wave to Kalokairi, and observe the bright colours and frivolous nature of the plot.

The plot, such as it is, involves 20-year-old Sophie, who is heading towards marriage. Upon discovering an old diary of her mothers, she posts a letter to three men, who she has narrowed down as her options to be her unknown father, and invites them to her wedding. 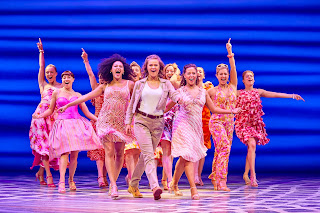 For a jukebox musical, the music at times feels nicely appropriate despite being written decades before, although some obscure plot devices are needed to sledgehammer a few classics in, it never feels forced. It is also a curious thing coming to this musical having only seen the film before, as you can't help but remember the stars of that film as each character are introduced, and it is uncanny how the film and stage shows are so similar. Surpassing the film though with this stage show is the quality of the singers, Jon Boydon, for example, casts aside any trauma caused by Pierce Brosnan singing I Do, I Do, I Do, I Do, I Do (please don't Pierce...).

Characterisation of the three potential dad's is a delight, all brilliantly contrasting one another, however, my favourite, without question, was Jamie Hogarth as Harry Bright, while very much making the role his own, but with shades more of how Hugh Grant might play the role curiously rather than the films Colin Firth. It is though, his own version and I particularly enjoyed his rendition of Thank You For The Music especially. 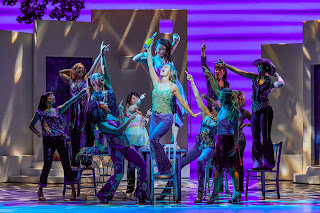 There is a tremendous performance from Helen Hobson as Donna Sheridan, extremely strong vocals and a delight of a creation of the character, from leading the brilliant Super Trooper segment with panache, and onto the sorrowful and sweet rendition of Slipping Through My Fingers. Elsewhere Gillian Hardie is truly brilliant as Rosie, culminating in one of the best routines, Take A Chance On Me. She manages to ebb every ounce of humour out of the glorious character (probably the best in the show) and her situations.

Emma Clifford has her moments as the surgically treated Tanya, which develops towards one of the best musical numbers of the show, Does Your Mother Know. It's an excellent sequence in itself, but the cast bring brilliance to it, and it allows one of the support characters, Pepper, played by Louis Stockil, his moment in the spotlight and he snatches it, with his enthusiasm and brilliant physical skills.

I always like to big up some of the supporting cast in these large ensemble shows, and as well as Stockil, I felt performing beyond the requirements of their character was a really wonderful performance from Blaise Colangelo as Lisa. She simply made the most of her lesser role and lit up the stage.

Less impressive, and perhaps the only real disappointment from the cast was a rather spiritless performance from Phillip Ryan. He fails often to have any real presence on stage and his vocals at times were noticeably below the other performers. He does, however, look the part alongside his love 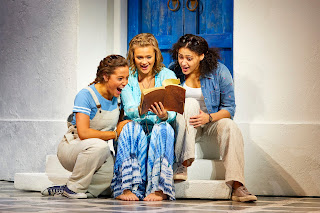 interest Sophie, who played by Lucy May Barker, provides the heart of the show. Barker managing to portray much of the confused emotion for the role.

Technically it is a pretty impressive production, despite some curious quivering spotlights at times. Scene changes are sublime though, with an impressively clever, revolving set, which happily creates all of the locales of this little Greek island. My inane observation of set changes left me with a glowing feeling especially from the slinky appearance and disappearance of 23 chairs (yes, I had to count them) for the chapel scene.

It is certainly not a cheap show to go and see (and no matter how big it is, £6 for a programme is far too steep for a touring show), however, this production, for the most part, looks great value on stage. It has a substantial and talented company, and with a band, albeit only seven in number, pumping out some bone-shaking sound. All the songs are nicely recreated and the dance numbers mostly work within the confines of the stage, both of these thanks to the ensemble, clearly bringing huge depth into the sound of ABBA as well as the bold performance numbers.

It's all just lightweight fun and the perfect evening of entertainment and by the second half the audience has returned well "watered" and much more in the spirit of the show, perhaps too much with some of them. By the time the curtain call arrives, many are up on their feet joining in. (One tip, take someone, as I did along, who can sing, as it helps diminish the pain of some of the sound going on around you.)

If you are a fan of ABBA, or indeed musicals with limited substance in general, you can't really go wrong with Mamma Mia! It does everything you would expect it to, and perhaps a little more with its clever integration of the songs, and as a result, you just might find it even more entertaining than you even expected.

The ultimate evening for any ABBA fan and perhaps just enough fun to convert a few others.
⭐⭐⭐⭐
Performance reviewed: Wednesday 24th January 2018 at the Royal & Derngate (Derngate), Northampton.

Mamma Mia! runs at the Royal & Derngate until Saturday 3rd February 2018 before continuing its tour until July 2017. Tour details at http://mamma-mia.com/uk-tour 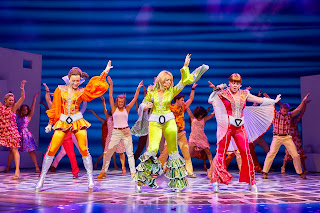