Review of Make Way For Lucia by John Van Druten at The Playhouse Theatre, Northampton 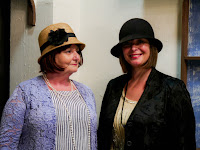 There have been a couple of television versions of the Mapp & Lucia novels by E. F. Benson over the years and irrespective of which generation version you might have seen, the roles of Miss Mapp and Mrs. Lucas were filled with some heavyweight performers. So taking on these roles could, in theory, be a challenge too much to live up to. However, that would be if the characters themselves were less the sum of the performer. These are great characters on paper as well as on stage and therefore Gena McCrystal (Miss Mapp) and Juliet O'Connor (Lucia) make them very much their own in the stage adaption by John Van Druten.

Lucia has arrived and breezed both into the town of Tilling and the musical chair roundabout of house rental that is want to occur here. Her rented property is Miss Mapp's and for some reason, Mapp fails to follow the routine of keeping away, constantly "popping in", so the battle lines are drawn.
Make Way for Lucia is the typical battle of supremacy in the upper echelons of society and set in the early 1930s, and it is tremendous if occasionally frivolous fun.

As Mapp and Lucia, Gena and Juliet spark off one another with delight on occasion, and they leave the audience sometimes doubting who to side with, although I suspect that most, and perhaps intentionally, finally settle on the much less pompous Lucia.

As is to be expected from a stage play adapted from six books, there is a great deal of material to condense, and as such while the story itself is solid, many of the great fun characters are diminished somewhat by necessity. You leave with no doubt that you would have liked to have seen more of the "Scottish" Rev. Barlett played with scene stealing relish by Adrian Wyman, and those that have seen at least one of the television versions or even read the books, will know that there is more depth to biscuit chopping Diva Plaistow (Di Wyman).


Those that do get a good bit of stage time though are the wonderfully comic Ben Knight and his portrayal of Georgie, the campest ladies heartthrob you could wish to see. He has some glorious scenes both with Lucia, and with his love rival Major Flint, played with some rambunctiousness by Simon Rye, and very wisely overplaying the nature of the character to gain maximum humour.

The performance I saw was opening night and it suffered a little from infrequent hesitation from some of the cast, possibly down to opening night nerves and a slightly quiet audience. As the week passes, the audience will no doubt help lift the pace as well from the occasionally stalling delivery. Personally, I would have also liked to have seen the set a little more dressed to make it in keeping with the hint of more money on show. Even a carpet of some description would have glammed it up a touch. Costume wise though, it is a delight to the eye, and with the vast wave of seriously weird facial hair and wigs on display, delivers a visual delight adding very much to the comic value.

So, Make Way for Lucia entertains very much in its simple and light comedy. This isn't raucous stuff, but more traditional fair and not only does it genuinely suit The Playhouse stage, it also suits many of the performers who bring to life these larger than life characters. Great fun! 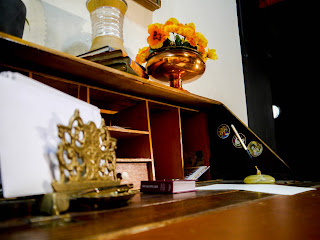