March 24, 2017
It is perhaps quite a bit of a review spoiler if I open on the comment that I went to see Vinegar Tom by Caryl Churchill a second time. It must mean that it was good then and this review will only end well, unlike for some of the plays characters? In all honesty, it was more superb than good and I probably would have watched it a third time given the chance.

However, it didn't all start well as I think for the first few minutes or so I still had in my mind that I might not like it. The blame for this lies I think with my previous horrific encounter with the work of Churchill and the excruciating Here We Go, officially the worst play I have seen.

However, time told very quickly that this play was not in that league. It opens with a meeting between Alice (Helena Fenton) and "Man" (Benjamin Hampton in the first of several roles) and is gorgeously performed by the two, with Helena in particular with the most perfectly gorgeous dialect. It is a stark powerful opening to the play, performed with absolute conviction by the two and quickly marks out a tremendous standard for this straight through 95 minute play.

Despite being set in the past and revolving around the conviction and trials of supposed witches, the programme is quite right in its atonement that this is still a very relevant play. Like the tremendous Blue Stockings was last year, it strikes a powerful message for the still present inequalities. It is of course more absolute in this play with its message, because thankfully we have moved on a little bit, however the problem clearly is still there.

This is indeed a treat from a magnificent cast of performances, and this time when I say there was no one short of standard, I absolutely mean it in every way. Not one of the eleven performers is a disappointment in anyway. Helena Fenton carries the emotional train throughout as Alice, while Victoria Rowlands is tremendous as her mother Joan. Progressing from a brilliant yeast demanding neighbour to the eventual, evil and spitting witch she feels sure she truly is.

There is an incredible multidimensional performance from Jessica Bridge as Alice's friend turned accuser. Truly believable in the confusion and stress she feels at the situation, culminating in her sad conclusion of becoming convinced that she is indeed a witch. I loved Rachel Graham-Brown's soft and gentle delivery and believable aloofness of the situations around her as Betty. She was particular brilliant alongside Kundai Kanyama's controlled performance as Ellen, the cunning woman. Itself brilliantly played, in what could potentially have felt a silly character in the wrong hands, with all the crazy potion whipping from bag antics. Jennifer Etherington (Margery) and Ruark Gould (Jack) keep a believable balance in their roles as the married couple and later accusers. Ruark especially knows how to create a laugh from the most simple thought or word. 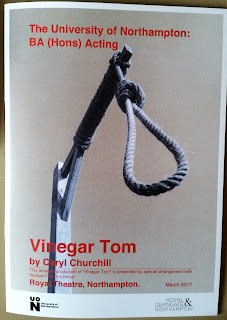 There is a scene towards the end, classic showmanship and vaudeville which is a bizarre contrast with the rest of the play, that it would be crazy to think it should work. However it does and is brilliantly and lively played by Florence Rees-White (Kramer) and Benjamin Hampton, full of perfect comic timing.

April Lissimore as Goody is a disturbingly cool witchfinder assistant, absolutely fine with what they are doing to her fellow woman, in total belief it is the right thing for all. While often it is played more for laughs than drama, it is often a chilling little performance.

Finally we have the tremendous Lewis Hodson, perhaps the most impossibly perfectly cast actor I have seen in a University show. Lewis is without any doubt superb and adds an oddly likeable personality to the totally evil Packer. He clearly has a style, which he brought to show in his equally great performance as Friar Lawrence last year, but when that style keeps working as well as this, you know that you have a future star on your hands. Demonic evilness has never been such fun to watch.

I have managed to get this far without mentioning perhaps the greatest part of Vinegar Tom, this being the brilliant songs, lyrics by Churchill but with vibrant and truly brilliant new music adaptations from Tristan Pate. They provide the bulk of the humour from this occasionally tough play, and are stunningly performed by the cast, revealing the depth of ability in these young stars.

This years Blue Stockings for me, the absolute best of the three plays, with some tremendous performances within. Emily Jenkins directs with flair, keeping the show moving and the cast on stage at all times. It was truly a brilliant and thoroughly entertaining ninety minutes of theatre. Magnificent!

Posh was one of three shows performed at the Royal by the University Of Northampton BA (Hons) Actors between Wednesday 15th to Saturday 18th March, 2017.

Details of Royal & Derngate can be found by visiting their website at http://www.royalandderngate.co.uk/