Review of Neville's Island by Tim Firth at The Playhouse Theatre, Northampton

March 17, 2017
A works team building away trip could happily paint seven shades of absolute hell on many peoples minds and that is if it goes well. For Neville though and his trio of companions, well doesn't ever come into it in Tim Firth's comedy drama.

Tim Firth is best known for Calendar Girls and it's next musical incarnation currently playing in London, The Girls. However with Neville's Island, things while remaining comic at times, stray into some very dark territories, and that doesn't mean the brooding trees and bushes of the island they find themselves trapped on. The themes here on display range from attacks on religion and to mental illness issues. Not, you would think ideal for a comedy, hence this is a little more drama as well. It works, most of the time. I am sure that on occasion though, some could be uneasy about Gordon's diatribes about Roy's issues and faith, indeed the latter, some would probably find quite offensive.

The first thing you are struck by with The Playhouse's production of Neville's Island is Mark Mortimer's set. A wooden world of intrigue on the little stage, boulders lurking in corner and leaf litter aplenty, it is a remarkable site. The fog machine pumps further atmosphere into the theatre.

The cast of four, while all very familiar with regulars at The Playhouse, are nicely cast, very much suiting their characters. Graham Lee is as Roy, the best I have seen him, a nicely balanced performance, which is especially strong in his calm and nicely delivered lookout monologues. Likewise, Victor Guse gives some depth to his Angus, clearly come prepared for everything with expensive camping gear in abundance. Prepared for everything that is, but Gordon's suggestions of supermarket activity away from the island. Victor does some nice brooding scenes following this, before things turn a little more active. I also enjoyed Hugh Jones as the clearly over thinking everything Neville. The captain of the group even as chaos, or should that be crisis, reigns around him, he clearly tries not to lose a grip.
However not for the first time perhaps, Jem Clack threatens to steal every scene from everyone as Gordon. This may well be Neville's island, however the character of Gordon is clearly given the best lines and the best characteristics, even if, as already suggested, he has quite strong opinions. The final battle between Gordon and Neville as the latter tries to put him straight on more than a few things is nicely played between Hugh and Jem.

Director Maggie Holland has clearly put great effort into creating an outside world in The Playhouse Theatre and even despite the size issues everything flows from scene to scene, and there are genuinely quite a lot of scene changes in this play. Most are handled swiftly by the cast, while we are treated to a little relevant music and light displays.

This all results in making a really rather entertaining evening. Not quite always as funny script as some, but it wields some excellent moments and definitely goes into material that you don't always get from a play within this genre. Good fun.

For full details of the Playhouse Theatre visit their website at http://www.theplayhousetheatre.net/
and can be found on Twitter @PlayhouseNTH 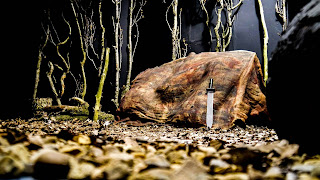