Review of Sorry I Killed Your Cat at The Courtyard Theatre, London

February 22, 2017
I have seen a lot of talent pass through the University of Northampton BA Actors course over the three years that I have now followed them and have happily followed their individual striving to make it in the packed world of theatre beyond training. It is especially lovely personally to be remembered, like I was by Lost Fragments Productions for having been there in their early days and be invited three years later to see four of those performers take to a London stage.

Sorry I Killed Your Cat is written by and stars one of those students, Tré Curran, and also stars graduates from Northampton, Liam Harvey, Katie Hartshorne and Annie Jones. It is a farcical in the extreme take on the classic dinner party scenario. Take Abigail's Party perhaps and bring it into the modern age and add what is a little bit of more fruity adult themes and you have this plays basic premise.

The characters are all relatively well defined and to a certain extent, ones with solid but heavy stereotypes. You have Katie Hartshorne's Charlotte the control freak and absolutely "perfect" partner, liberally peppering the living room (and indeed the auditorium) with post-it-notes with jobs to do for her ill-suffering man, James (Tré Curran). James on the other hand, the clearly calmer (if that is possible in this play) other half, traumatised by the early events that unfold as the dead cat of the title emerges, and then latterly as the misunderstanding of their dinner guests are revealed.

As the guests, we have Liam Harvey's northern Aaron (perhaps not actually northern enough though in delivery for the entertaining running gag) and Annie Jones as Lisa. The two characters are much weaker in development than Charlotte and James, with Lisa especially a little two dimensional, only really coming to the fore in her motivational speeches, including the rather brilliant one about the strengths of pigeons, nicely performed by Annie Jones.

Performance wise, this is played exceptionally well where the play allows, Katie Hartshorne is especially strong as the overpowering Charlotte, relishing in particular every moment of her latter very drunken state. All the other members of the cast play their roles full-on, seemingly only having this one gear in the play. This is personally where at times the play doesn't quite work as a complete package. I like my farce to have a tinge more of real drama, thinking the hidden depths that playwrights like Ayckbourn give to their characters. While trying to achieve greatness like this is absolutely a challenge, it is one that is worth striving for, and perhaps the biggest reason for the lack of this is its relatively brief running time of 70 minutes. This doesn't allow characterisation to build, relying on just the silly elements coming to the fore. This is absolutely a brilliantly witty one act play, but if this could be worked into a full two act one, the characters could breath and the story could flesh out and make this an exceptional piece as opposed to currently just being a very good one.

If all of this sounds very negative, it shouldn't be. It is a clever play from a writer who clearly has got the talent to create real quality work. It has some great lines that rightfully left the audience in stitches and several really clever scenes. It also has great pace and this coupled with being very nicely performed, it totally deserves like opening night, a packed audience at The Courtyard.

Show Boat continues at the The Courtyard Theatre until Saturday 25th February, 2017. Details can be found at: http://www.thecourtyard.org.uk/whatson/824/sorry-i-killed-your-cat 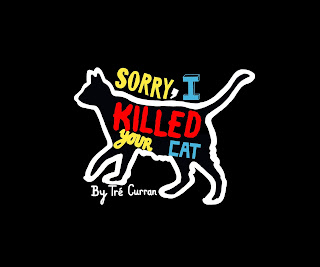