Review of It's A Wonderful Life by Masque Theatre at the Holy Sepulchre, Northampton

December 16, 2016
Remarkably I only saw the classic film It's A Wonderful Life last Christmas, this was thanks to spotting it lurking on my subscription of Netflix. A glorious heartwarming film perfect for Christmas? That must be why I was a blubbering mess at the end of it then. There was hope that in public, The Masque Theatre's performance of the radio version of the story didn't leave me in the same situation. As it happened it did a little as that final scene in the Bailey household played out again, but it didn't matter as there were members of the cast in the same broken state as many of us audience members.
This was the first radio play that I had seen performed and on the evidence of this, I sure would like to see some more. While not having the drama of standard plays in their creation of moment and places, they do have a rather striking drive towards character creation. The cast may well be reading from the script, but at no point do any of the characters drop from the facial characteristics of the people they are playing. They may well be wearing dinner jackets or classic forties style dresses, but when John Myhill performs as Ernie the cabbie, you can imagine him in very different dress driving along, or when John, Lisa Wright and Michael scream in delight around one microphone, they are for that very moment Pete, Janie and Tommy, the Bailey children.
When I learned of the full cast of this show was to feature three of my all-time favourites of the local theatre scene, I knew that this was almost certain to be a gem of a production. Never have John Myhill, Lisa Shepherd or Jof Davies disappointed in anything I have seen them in, and this show wasn't the place for that to start. This coupled with the relatively unknown to me, Michael Street and brand new to me, Lisa Wright, who were also both on top form, guaranteed an evening of joy (and sobbing).
A few picks from the many characters on display for me were Lisa Wright's Zuzu, capturing the youngster very sweetly. Michael Street's quite brilliantly calm and softly toned Clarence Oddbody was unquestionably his highlight, and perhaps rightfully so.
John Myhill's bag full of characters is a challenge of where to start, and perhaps there are few locally who would be a safer pair of hands to seemingly effortlessly have conversations with himself in hugely contrasting characters. As mentioned, I loved his Ernie the cab driver, but also brilliant highlights were of course the creepy and conniving Potter and also Old Man Collins.
Lisa Shepherd and Jof Davies both only have a single role each within the play, that of Mary Hatch and George Bailey. They work wonderfully together as a team, playing many of the classic scenes nicely including the phone scene "He’s making passionate love to me" and the wonderful stone throwing scene. Jof in particular works on his Stewart, but also doesn't make it eclipse him making the role his very own as well.

Brief mention of stone throwing takes me to another little gem of this play, the on stage sound effects table and its controller Jo Molyneux. It really truly is great fun to see the various contraptions and devices used to create the effects live. It is perhaps a very genuine highlight of the show to see this happening, and its great to not only see Jo on stage in the limelight, but very much in character.

The stage is also yet another highlight, with Emma Barrow's quite brilliant art deco designed WBFR radio studio the most perfect backdrop and also effortlessly merging into the classic Holy Sepulchre surround. Director Matt Fell casts his obvious skills on proceedings with neat little touches of conversation and play between the characters when away from the mic and the two nicely staged radio commercials bring a nice little aside to the drama playing out.

So, yes. I expected this to be brilliant long before I got to see it, and thankfully I hadn't built it up like a few recently, to become in the end a disappointment. It never is this, and for ninety minutes, it is probably one of the best the brilliant local amateurs have brought to the stage this year. A perfect way to finish the year and have a heartwarming blubber in time for Christmas.


It's A Wonderful Life is performed by the Masque Theatre and runs until Saturday 17th December, 2016 at the Holy Sepulchre, Northampton.

Details can be found at http://www.masquetheatre.co.uk 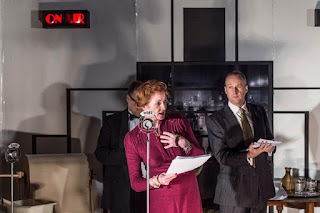