Review of The Season at Royal & Derngate (Royal), Northampton 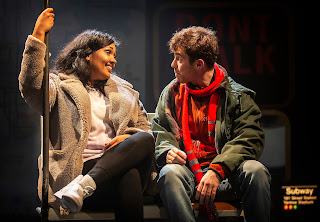 The Season, is a Christmas show of a different kind, a warm romantic feel, without pandering to the expectations of, a warm romantic show, set at Christmas. This lively, extremely funny, and musically clever show is perhaps everything you need for a bit of November Christmas.

Dougal has come to New York to meet his father for the first time and as he lands at JFK, he is met by his soon to be auntie, Robin, and over two days, they form an unlikely partnership.

This two-hander musical is an absolute cracker of a show, written by Jim Barne and Kit Buchan, it melds an old form of story-telling with very modern concepts. As ever of a show like this, Barne and Buchan have created two perfectly balanced characters, ones that play off one another as total opposites, but the audience knows really that by curtain down, these two with have a thing. Or do we...? 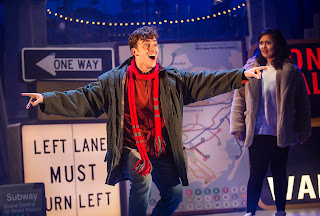 What is particularly sharp about The Season, and already mentioned in my opening preamble, is that this breaks the norms of romantic comedy, almost driving us away at times with the thought that they will end up together. The storyline takes us away often from the idea they are a match in any way, and in perhaps the best of the many clever and intelligent songs in this show, Dougal even sets up Robin with a Tinder date. Very modern, and very smart, and superbly performed by the two actors.

Alex Cardall as Dougal is a hyperactive child in a grown man's body. Childish at all times, climbing on furniture, thrilled by the subway, excited to see the street from Ghostbusters, this is the modern boy who doesn't want to grow up. In this, Cardall is excellent, a jumping jackrabbit of performance that perhaps you might think to get tired of, like Robin occasionally pretends to. However, like Robin, we don't, Cardall makes him a brilliant creation, and no question he has the funniest lines to boot. 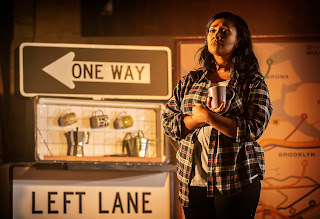 Tori Allen-Martin as Robin is the perfect foil for Cardall's Dougal, straight-faced, most of the time, with her character torn with hidden guilt, and as Dougal points out, an almost incessant need to stay sad and not embrace life beyond serving at coffee shop Bump 'N' Grind. Allen-Martin takes us through her journey of discovery of how things can be better when you find the right person to show you how.

Director Tim Jackson brings much life into the show, allowing his actor's freedom to be as big and bold as they desire, and upon Amy Jane Cook's seemingly simple, but quite beautifully conceived one, the whole show has no lapses in drive or energy. 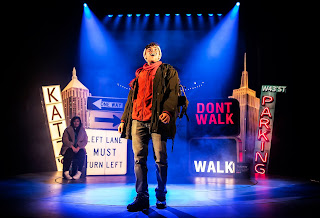 Song's are delightfully performed, and to see a musical in The Royal is a rare delight, and much the better than in a bigger venue. Allen-Martin has the bigger singing range, bringing warmth and emotion to her solo performances in particular. Cardall is more the in character singer, performing every song as you could imagine the character of Dougal doing so. They form a pretty perfect partnership for the entire show and work in the duets exceptionally well, particularly the drum controlled argumentative song, another example of how clever some of the concepts are here.

The Season is an unexpected delight, bringing truly intelligent, but never awkwardly clever writing, to the stage. It is the most perfect theatre for all, and you could happily imagine settling down on a Christmas Day afternoon and watching a film like this (minus the occasional swearing for granny).

You would be wise to start your Christmas a little early and get to the Royal & Derngate to see this show and get your heart nice and toasty for the festive season!

Warm, funny intelligent, this is the perfect theatre for The Season ahead.
⭐⭐⭐⭐
Performance reviewed: Wednesday 20th November 2019 at the Royal & Derngate (Royal), Northampton.

The Season runs at Royal & Derngate until Saturday 30th November 2019.