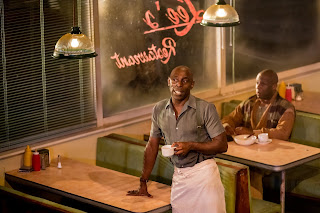 For regular theatre-goers, we always expect a little checklist of things that might occur during a show, and August Wilson's Two Trains Running, in this new co-production version between Royal & Derngate and English Touring Theatre, in particular, does two of them. The first, to challenge the audience, and looking around during the show at the predominantly white audience being told for the best part of three hours how awful the white man has been in the past, they were rightly challenged. A second checklist item would be, to cause debate, and as I wandered around post-show, as people were enjoying their drinks, I dipped in and out of several debates that, with this weaving themed play, were not by some distance tied just to one theme. So, in this, Two Trains Running ticks two boxes conclusively, but what of the rest? 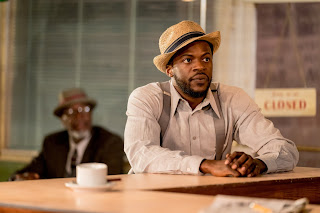 Two Trains Running is set in Memphis Lee's Cafe, a place of refuge for the likes of the rebel-rousing, Black Power radical and sure of himself Sterling, old and seen it all before and kept quiet about it Holloway, and the man about town Wolf. Here Risa serves and cleans and the world continues to pass by the diner windows changing the path of those within.

Two Trains Running is a tremendous mixture of successes, and for me, quite a few extremely weak parts as well. Curiously the writing is one that inhabits both worlds, some of the dialogue is wonderful, natural, pure and the characters at times are often strong and so vivid, you feel you know them. 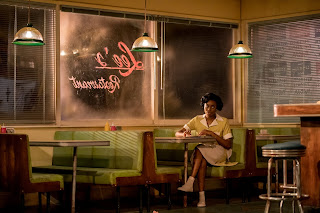 Memphis himself is perhaps the best of the play, a strong, but also endearing character, fighting the white man for the money he deserves for his diner. It is a great performance by Andrew French. Ray Emmet Brown is equally strong blazing in, sharp-suited and cocksure, answering the phone as if it is his own, and slinky, sliding into the furniture as if he is part of it, a quality performance.

Geoff Aymer forms what is predominantly the main comic character, in undertaker West, and for a while, as he was being described with flair by the other characters, I sort of hoped he wouldn't even appear and remain the character painted by Wilson's words. When he did though, it was fine, as Aymer and the writing make him a great presence, on the lookout for sugar, and well up for a tale of what item he has put in the coffin next, much to the suspicion of everyone else. The scenes subtly always benefit when West is in them.

Elsewhere we have the wise Holloway, played by Leon Harbert, the heart of the story in a way, filled with comedy and poignant tales at the drop of a hat and switch of a heartbeat in style. Harbert's portrayal is perhaps one that will grow as this tour moves on, there is, certainly, for now, insecurity in some of the lines, and because of the natural relaxed style of the character, it will over time become much stronger as the actor "relaxes" into the role. 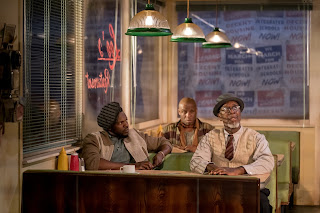 There is great work from Michael Salami as ex-con Sterling, sure of himself, and perhaps sure for us that he will do one of two things, end up back inside, or on the arm of Risa. As Risa, Anita-Joy Uwajeh is a delight, the sole female character, happily serving the customer, but often just at home in the kitchen, looking on at happenings from afar. She is bold and strong though, enough to fight her corner in any situation, and Uwajeh is extremely confident in the role. However the character of Risa is the point where things do come a little unpicked, but more on that in a bit, as finally, we have Hambone, a character who has gone "crazy" and now, and for ten years has said just two sentences "I want my ham” and “he gonna give me my ham". It is a tough role to portray and Derek Ezenagu has some success, but I feel falls victim a little to direction and consistency. I felt vocally at times he was solid, but physically, the character is often broken in poses and things that all of a sudden he seems to be able to do with ease. There are a couple of what in essence are wonderful scenes between Hambone and Sterling, where he coaxes him to say a new sentence. It is strong emotionally, however, it seems too easy, especially in repeating the line with no hesitation. This is Wilson's fault of course, not this production, however, having said that, more hesitation could still have been bred into it. 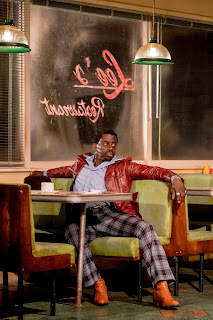 So, yes, Hambone, and now Risa are two big issues, both portraying mental illness, the latter, self-harm in an attempt to avoid unwanted male attraction. The motive is fine, especially for this time and social situation, however, it is treated here as a joke. Either deliberately or unwittingly, there is a lot of disregards here. It is fine to cover all subjects, and things like offence are fine in context, but when handling things such as this, you need to act responsibly. The whole thing is poorly portrayed, from the reveal, the makeup, and the resolution (there is none), and it weakens the whole play as a result, maybe not for all, but maybe enough. It's easy to say that this is all relating to the time, and we have to maintain what would happen then, but, in something like this, its not the case, it doesn't serve as education, like us being taught about how black people were treated, it serves as a danger to those suffering from the issues when is belittles them in this way.

Perhaps the worst thing about Two Trains Running though as a play is that is doesn't go anywhere. This is three hours of drama in need of actual drama at its culmination. It's easy to say that Wilson creates some vivid dialogue and, some, really strong and good characters, so, that is your drama. However, when you have invested the best part of three hours into a play set in a static never-changing location, the first thing you do need is for something to happen of some significance. It's threads, and many they are, weave about, and at the end mostly fail to conclude, and as a result, the whole play peters out, and the final scene and image of the cast does nothing to disguise that fact.

The set from Frankie Bradshaw is stunning, portraying the diner full of vibrancy, and energy, and yes, still hope, and then the future atop, predicting what is to come. Lighting from Amy Mae is equally well-measured giving a nice realism to the diner, and subtle changing of time. The cast accents are for the best part OK, with a few slides at times, and there are a few scenes when excitement gets the better of them resulting in dialogue lost. 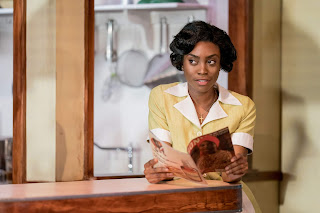 Director Nancy Medina does a fine job mostly handling a challenging space and I appreciated once again some of the bold, naturalistic approaches to this leaving characters seated with their back to the audience for long periods. If there is one thing I am a fan of, it is natural blocking.

Two Trains Running is not a bad play, it maintains interest throughout, and at no point did I drift. Much of it is through hope and optimism of what might happen, as with so many threads running through it, the options were plenty. Therefore when we reach the end (which if had been half-hour earlier, more the better), with not a great deal having happened, you feel more than a little cheated. Having said all this though, I refer to my original paragraph and what this creates in it's audience, and if you want to be stirred into something from theatre, Two Trains Running will, without doubt, give you much to think about.