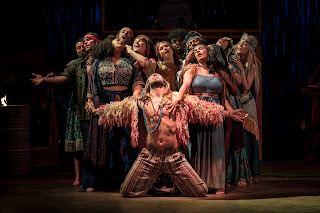 I first saw this rebooted version of the sixties musical back in 2016, when at the compact little Hope Mill Theatre in Manchester, director Jonathan O'Boyle first presented it on the stage. The intimacy of the venue, where you were never more than a few metres from all the cast, was perhaps one of its greatest impacts. So, in a space like the thousand-odd seater, Milton Keynes Theatre, the question is, does it still work? The answer is mostly yes.

Hair first launched onto the stage in 1967, at the height of flower-power and more importantly for the, admittedly at times light story, the Vietnam War. These hippies are living it high, permanently and fighting the fight against that war, and all it represents. After fifty years, perhaps its relevance wains in that respect, but what we are left with is a kaleidoscopic collection of music and tripping theatre.

There is no denying that Hair is an excellent show, but despite revelling in the original version of this version back in 2016, sitting twelve-rows back from the stage did take much getting used to how I remembered it. It is full once again with great performers (some originals from that 2016 version), and the music is superb, but there was something missing for me. The intimacy of the immersive experience had gone. It was great that they kept the interaction in, but this time, I was watching it more than feeling any part of it. It's tough though being intimate with an audience of this size though, so, it's got to be excused a little. 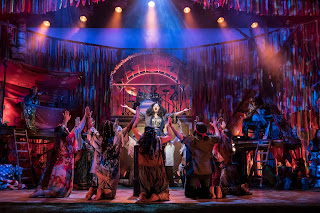 Performances are strong, Jake Quickenden is a totally crazed Berger, sexually charged and willing to do pretty much anything, and the true representative of how controversial this show was back in its day. Paul Wilkins' Claude is strong and given pretty much the only character development of the show as we see the horrors of war through his eyes.

Original cast member Natalie Green is once again superb as Cassie, you can see in her performance her love for the show, and her vocals are as ever strong. Aiesha Pease brings immense vocals to her performances as Dionne including the powerful opening of the show, Aquarius. Daisy Wood-Davis is delightfully sweet as Sheila, and delivers my favourite song in the show, Good Morning Starshine, beautifully. 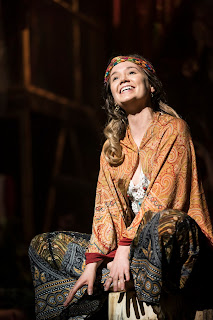 At times is a bit of a shame that from our position in the audience the audio balance didn't quite feel right, with dialogue and lyrics washed away at times by the volume of the admittedly superb band.

Visually it is a feast, Maeve Black's set is a colour explosion, and together with Ben M Rogers stunning lighting, it is often so beautiful it hurts the eyes, never more so than during Oh Great God of Power.

I really enjoyed Hair again, less maybe because of how I had experienced it before, but for newcomers to the tripping world of the show, or those that might just have been there at the time, it will I am sure delight again. It has an amazing soundtrack, still one of my favourites personally, and this is a wonderful vibrant version of what was an incredibly important stage show in history, and perhaps everyone should see it, if only for that.

A vibrant version of the groundbreaking musical.