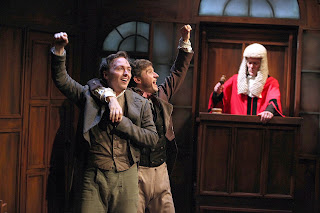 Private Eye's Ian Hislop and writing partner Nick Newman once again reunite after their hit The Wipers Times successfully transferred from TV to stage. This time they take their own Radio 4 play, Trial by Laughter, and transfer it into a remarkably slick stage play.

William Hone was, conveniently, the Ian Hislop of 1817, a satirist charged with libel (and a little added blasphemy), and charged and subjected to three trials in three days. His story told here in a witty, but occasionally slightly heavy way is the cornerstone for a lot of the now free press we see in this country. Not that this has stopped Mr Hislop himself from finding himself in the dock countless times of course.

Trial By Laughter is a curious piece which has more successful moments than failures. It does take a while to get going, despite an opening scene featuring the brilliant Jeremy Lloyd as Prince Regent, a living and breathing caricature on stage himself, portly and looking every bit the drawn work of cartoonist Cruikshank. He and Helena Antoniou as Lady Hertford provide the buoyant and larger than life humour of the play, the physical material, while the rest, is more delivered through speech. They are the perfect antithesis in comedy style presented here. 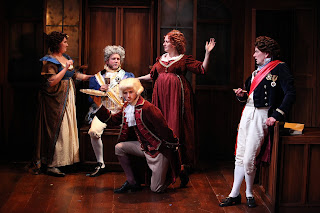 As the man of the hour, William Hone, Joseph Prowen gives a very slick performance, maybe at times too much so, its a little too perfect, not allowing the character to come out into someone you can actually like enough to justify supporting his plight. This is at odds with a much better Peter Losasso as Cruickshank, he is much more relaxed in his delivery, making the character much more enthusiastic and earnest, and easily appeals to the audience more. His is the best performance in the show.

Elsewhere there is a brilliant mix of turns from Dan Mersh, who as both Hone's drinking buddy Hazlitt, and the judge, Ellenborough, seeking to send him down, has some of the quickest switches of character, in a play that thrives on doubling or more up, with little time in between other than to grab a different coat.

Dora Schweitzer set provides a slightly cartoonish depiction of a royal court and courtroom backdrop that easily switches between venues, with more than a little help from Matt Leventhall's lighting, especially with the neat prison scenes. The star of the set though is an animated clock, which has a character all of its own, creating time passing and spinning back when the story brings a flashback to the fore. It's a brilliant concept and enhances the show greatly.

There is indeed a lot of great theatre set pieces here including swift set changes and a couple that very much form part of the story, and also adding clever comedy as a scene, for instance, is bridged by a thieving servant. 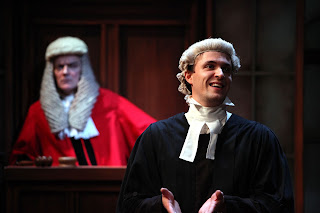 The curiosity of locational audio of the jury and those in the gallery of the court is a curious one, which, where it is relevant to the proceedings works, however, at times it can also feel like a laughter track, telling us, as a modern audience where to fully get the jokes, especially if they are more of their time. It just about works without being an uncomfortable addition, and is certainly technically impressive.

A very nice surprise from the show also is the inclusion of a few songs into proceedings and neat dance numbers, all very period in style, nicely performed and they work to break up the occasional worthy dialogue.

Director Caroline Leslie keeps the piece flowing with an eye to a good pace, which the set allows superbly, and while Hislop and Newman's script occasionally heads in the direction of being too clever for its own good, it always has a proper laugh or vulgar joke on the way to stop it becoming tiresome in its worthiness. Certainly an entertaining piece of theatre, telling a pivotal piece of British legal history.


Well staged and light enough to always entertain despite telling its tale in quite a stale way sometimes.
⭐⭐⭐⭐