Review of The Full Monty at Royal & Derngate (Derngate), Northampton 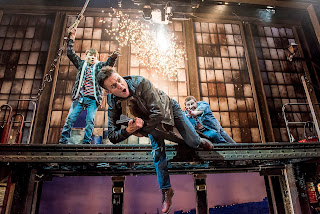 The 1997 film The Full Monty is one of the best regarded of relatively recent British films, due to it being both a warm and emotionally strong tale, solid comedy and a wealth of acting talent, and it's no surprise that its very theme has spawned an immensely successful touring stage version. It literally overflows with the opportunity to be performed in front of a, probably mostly female, audience, well, the final scene does, in any case. However, what of the rest, and how about for a male audience member? So to speak. Well, it was time to find out. 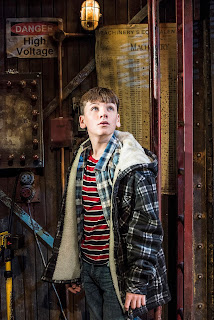 The first thing that is apparent from The Full Monty stage show, is how faithful this is to the film. Much of the show is what you have seen if you have seen the film, but translated cleverly to the stage, it feels just that little more real and gritty as well. It opens with a nicely staged scene of darkness and flashes of a torch as Gaz (Gary Lucy), his son Nathan (Fraser Kelly) and Dave (Kai Owen) break into their former factory workplace to steal a girder. It's a perfect theatre scene and opens up to show designer Robert Jones' rugged set, which while basically staying in place throughout the whole show, has many neat minor tricks to offer scene changes. All of which are nicely handled by the crew, but often much by the cast and always clearly in character.

For those that may be unfamiliar with The Full Monty (I am sure there is someone, but you need to sort that out), it is set in Sheffield under Thatcher's Britain and the broken industry and closed steel mills. Those former workmates meet still, depressed and desperate at Job Club, where they can hire out a tie for interviews, and in job centre queues. When Gaz chances upon the sold-out touring strippers The Chippendales at his local, an idea begins to form of how he can get some much-needed money. So, he sets out to cast his strippers and ends up with the fat, the boring, the old, and the well-endowed mates to join him for one night of stripping.

The six main stripping men in this production are all brilliant in their own way, work together superbly as a team, all feeling genuinely matey,  and they are bold as brass in their inhibition at the final, extremely well staged scene. Their characters develop with ease through the show, such is the quality of both Simon Beaufoy's great adaptation of his own screenplay and all the performances.

Gary Lucy commands the show as Gaz from his first confident pose at lights up, but he also balances this confident character with surprising depth in his extremely emotional scenes with his son Nathan, showing the weaknesses withing him. As Nathan, Fraser Kelly gives an equally superb performance, showing good reason why he has returned to tour again after a previous one in 2014, and genetics allowing him to do so as well. 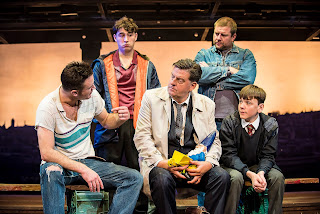 Brilliant comedy support and poignancy is provided by a quite splendid performance by Kai Owen. While he is often the comedy foil, as the self-confessed fat guy, his scenes with clingfilm and most especially in his later scene with Jean (Liz Carney), "I want to see you [dance]", are tremendously powerful, hidden in all the larger than life antics of the show.

James Redmond, also touring once again with the show, has made the role of Guy his own, and while he doesn't arrive until late in the first act, his arrival could not be more dramatic and comic. In the second act also, he shares with Joe Gill as Lomper an intensely powerful scene full of emotion, which is perhaps the best of the play.

Andrew Dunn brings the stuffy Gerald to life, all apparently desperate to distance himself from his former workmates, but clearly eventually loving being part of the gang, and he shares some equally brilliant scenes with Bryonie Pritchard as his wife Linda, which continues to enforce how tremendously powerful, under the bawdy and comic nature at times, The Full Monty is. Finally, Louis Emerick brings his classic comic moves to the stage, with the slightly elderly, but still able to shake it, Horse.

Director Rupert Hill does a great job keeping the scenes flowing and there are some great set pieces, from the classic and always brilliant job centre queue scene, to the tremendously well staged early scene with Lomper (I won't spoil it). There were a couple of issues on this opening night, first a rather weird opening scene where at first Lucy was somehow trying to do the Sheffield accent too strongly, making initial dialogue difficult to grasp. For whatever reason this occurred, it was swiftly corrected for later scenes. Also a door issue, and following delayed entrance was neatly dealt with an adlib or two. Finally, while a really weird observation to make, but I annoyingly spot odd bits in shows now, but why were The Bums of Steel posters saying Saturday night, when every script mention was for show night Friday. Minor, but odd. 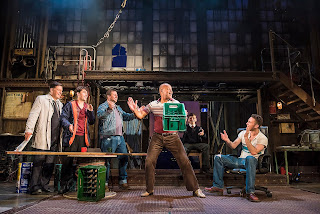 The Full Monty is an excellent night out for all, and from a male perspective, not intimidating at all in the end. It's true that the final scene feels it goes on too long (it doesn't), and while I went with concern that the audience could be, interesting. They were amazingly well behaved, only getting excited at Lucy's opening arrival in pose and the obvious final scene. At no point did it feel uncomfortable, and to be honest, the audience was almost a disappointment in their enthusiasm, I blame Brexit for putting a downer on them.

However, The Full Monty should be seen as a guarantee of a great night out for all. It has great music, is poignant, but never overly sad, and it finishes of course on the most perfect climax. Highly recommended.

The Full Monty runs at Royal & Derngate until Saturday 19th January before continuing its tour.