April 21, 2017
It is an awful lot of pressure to put on both a production and a group of performers to recreate legends of the past, and with Million Dollar Quartet, it as the title suggests brings the need to bring four such icons to the stage. However this touring production of the show knows no fear and rarely fails when bringing both them and an iconic day in the history of music to the stage.

Set on a single day in December 1956, Million Dollar Quartet tells the story of a chance gathering of Jerry Lee Lewis, Carl Perkins, Johnny Cash and Elvis Presley in a recording studio and the creation of an album of legend.

The first of the four we meet on stage is the cocky new guy Jerry Lee Lewis, performed on this night by understudy Elliot Clay. As is often the case with an understudy in my experience, it is an incredible performance capturing both the skill on the piano and the vocal talent impressively. He is suitably irritating to each and everyone else as this precocious, over confident kid making his mark on the recording studio for one of the first times, and Clay is quite brilliant.

Matt Wycliffe's portrayal of Carl Perkins is very different to that confident kid of Lewis, this is a star on a downward spiral of success as his crown has slipped and being grasped by his new competition Elvis Presley. Wycliffe's performance maintains a great balance in the need to get back to the big times, but also with them hidden ghosts of failure that would throw a shadow over his career forever.

Perhaps my favourite performance, and one of the most challenging to capture, is that of Robbie Durham's Johnny Cash. While all four have their styles, Cash was something different vocally and a remarkable performance is provided by Durham, with his recreations of I Walk the Line and Folsom Prison Blues were particularly impressive.

Perhaps though the greatest challenge in this musical of many challenges falls upon the shoulders of Ross William Wild. He rises to the challenge, mostly. Vocally in the songs he is more than strong enough to carry the mantle, and he has the moves required in the hips to create visually the legend as well. Perhaps at times when not singing, he doesn't quite sound and act the part, however his sparky and obvious love, but mostly hate scenes with Perkins are adeptly handled.

Holding the only flag aloft for the feminine gender in this show is Katie Ray as Elvis' then girlfriend Dyanne and she gives a truly incredible vocal performance and such power into Fever that suitably sends a fever though the audience. Her entire performance is really quite endearing and the perfect balance for all the testosterone on display. 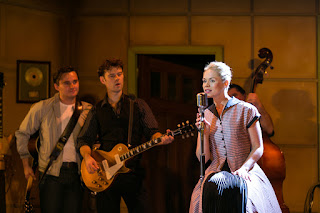 Completing the main cast is Peter Duncan in the rather curious, but crucial role of Sam Phillips the producer. I say curious, because in this musical, other than the epic final concert encore, he doesn't partake in any of the singing numbers and acts mostly as the narrator. Duncan is solid in this role and of the touring cast, perhaps the most suited in it, as Jason Donovan and Martin Kemp have played Sam and I can't help but think you would feel shortchanged with them in this non-singing role. 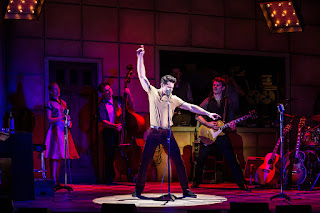 Direction from Ian Talbot is neat and concise on the single set and despite most of the time the whole cast being present, he makes it never feel cramped or restricted and it feels like a working studio. The book from Colin Escott and Floyd Mutrux is always entertaining and provides sparky and funny dialogue, mostly in the hands of Jerry Lee Lewis. It also neatly introduces the creation of that classic photo of the four around the piano, creating a poignant scene which gains a lovely round of applause from the audience.

As expected from a show based around a single day, it comes to a relatively early end, however this allows a glorious chance for the show to go full concert complete with extra banks of lights. It allows the show to give the audience everything that they want and they truly lap it up, many up from their seats.

Million Dollar Quartet is perhaps more music show than musical at times, but this is not a criticism, as the music performances are always never less than brilliant. A real feelgood show that should entertain both young and old, despite it clearly being lapped up by the old brigade the most. Really recommended if you are either a fan of the originals or love their musicals with that more concert edge.

Million Dollar Quartet runs at the Royal & Derngate until Saturday 22nd April, 2017 and continues its tour thoughout 2017. Details of dates and locations can be found at http://milliondollarquartetlive.co.uk/


For further details visit the Royal & Derngate website at http://www.royalandderngate.co.uk/