March 21, 2017
The first of this year's BA Actors performances at the Royal, although wonderfully performed, was not a play to the liking of this reviewers taste. The difference twenty-four hours can make though as I settled down to see the next, Posh by Laura Wade, is quite remarkable.

Originally performed at the Royal Court in 2010, it tells of a gathering of "The Riot Club", a fictionalised version of The Bullingdon Club, in a private room of a pub run by Chris and his daughter Rachel. Their "private" activities and typical rowdy behaviour ensures in Laura Wade's truly brilliantly written play.

There is very little to disappoint from this production directed by Dan Coleman in a breezy and pacy way, with the exception of just a couple of slightly disappointing performances, and the rather weird opening and closing scenes which destract from the main meat of the piece withing.

Among those things that are certainly not disappointing include the tremendous Lee Hancock as Alistair. Having been one of my standout performers from the Shakespeare plays last year, it was wonderful to see him in a strong and meaty role, and he sure didn't disappoint. I remarked in my review for Romeo and Juliet last year that "he also has a tremendously powerful voice, which I simply cannot wait to hear projected from the Royal stage next year", and nothing was a disappointment coupled with his dynamic stage presence, he is a sure one to watch.

In that same play, Steven Croydon's Peter had also been quite a highlight, and in Posh as Toby Maitland he often engineered the audiences eye in his direction again. Acting drunk can often be clumsy and silly if it is not in the hands of a great performer. Steven nails it at the perfect balance. Never straying too far down the lines of the ridiculous, despite it being played for laughs. He also has a knack of expressing disinterest really rather well also. There is a brilliant interchanging scene between Croydon and Hancock where we get two broken conversations, hearing snippets of the formers during the others main speech. It is truly brilliantly timed and a masterstroke of ability from the two, and excellently staged by director Dan Coleman.

Also on the back of a brilliant, but albeit brief performance as Pinch in The Comedy of Errors, is Chris Drew and his clearly brilliant ability for comic performances. As pub owner namesake Chris, he becomes a genuinely endearing creation, balanced just the right side of caricature of working class man at odds with the posh customers. As the evening escalates against him, you can't help but get fonder of him, and it plays wonderfully well with the excellent Jennifer Wyndham's as his daughter Rachel, more than able to handle herself against the oiks activities and lecherous comments.

There is only one other female actor in this male dominated play, but like Jennifer, it presents a confident performance from Lauren Scott in a telling scene. Hired as a piece of "under table servicing", Lauren's high class escort Charlie is as strong as that of Rachel. It is sadly a brief scene from Lauren, but in its brief period has a great deal to say about the escort and prostitution profession. A really brilliantly written sequence. 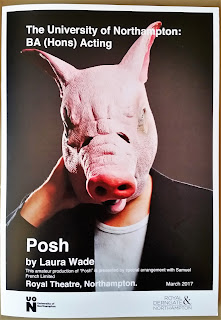 Other great highlights from the play include Olly Manning, superb as the overeager George Balfour, still pretty much a child at heart. Tom Garland brought great comedy to his role of Ed Montgomery, the new recruit to the group and keen to please. He made great play of his obvious liking of Rachel whenever she arrived, which played tremendously well with the audience if some of the "aww's" heard were anything to go by.

Ben Barton successfully avoiding being typecast as a dog following his entertaining turn in Scrapnel, was excellent value as Hugo, perhaps the only member of the club that you might nearly try to like in person as a lowly peasant. Finally Connor McCreedy was great as James Leighton-Masters, the President, a role he nicely downplayed, this allowed a nice balance with the other more over the top characters making the group work more successfully.

Director Dan Coleman creates a very effective piece on stage for the actors to work with, nicely allowing the wrong thing to happen around the dinner table, with characters often with their back to the audience. It works tremendously though, even if you think it shouldn't as these scenes are kept brief.

Posh clearly is an excellent play (and is soon to get a run in London with fascinatingly an all-female cast) and with the work of a fantastic bunch of excellent young actors is given a vibrant, enthusiastic edge which thoroughly entertained.

Posh was one of three shows performed at the Royal by the University Of Northampton BA (Hons) Actors between Wednesday 15th to Saturday 18th March, 2017.

Details of Royal & Derngate can be found by visiting their website at http://www.royalandderngate.co.uk/