March 16, 2017
You always have to remember that the BA Actors course that I happily follow is there foremost to challenge and teach its students. For this brief period of theatre going, perhaps the audience (paying or not) are not always the most important part of this production. I make this reasoning for the selection of this play, Pornography by Simon Stephens and last years Days of Significance by Roy Williams. Neither of them offer much of a way in for the audience with their endlessly unsympathetic characters and grim look of life.

I can see a day after seeing the play and my usual 'sleep on it' contemplation, why the play works for the students, it challenges them as much as this grumpy theatre goer in row C. Difficult and challenging subject matter, disturbing situations to portray and some really very long and difficult monologues for the several lead characters to perform. It all provides a checklist of items that an actor will see in their future careers. At the time, I felt that the use of the microphone was a curious thing and didn't see how it worked in favour of the performers, taking away the wonderful challenge and this first opportunity to project to the upper reaches of the wonderful Royal. I still think it didn't serve too much of a purpose, however having seen in the past at least one performer who couldn't use a microphone when needed, maybe not. All life is a lesson.

There is also a disappointing lack of movement within the play which we all know is a huge strength of many of the performers in this group. So many of the scenes are performed from a chair or just standing with occasional moves from A to B. There are no bold choreographed scenes to stimulate the audience that this course normally does so well and allows freedom to the performers. Liam Faik for instance while brilliant in his scene with the equally stunning Karr Kennedy, building his character until he explodes in the most horrible way, never gets to run free with that amazing ability and strength he used in She Echoes. It all therefore becomes a very simplistic piece on the eye. Sure you can only work with the material you have, but more movement from these wonderful actors would have been so appreciated.

What is brilliant though is the casting, all of the actors fit their roles superbly from the main players to the supports, all bring their characters to life (no matter how horrible most of them are). Joseph T Callaghan is particularly disturbing as the stalking teen, the venom with which he expels his ideas of revenge really do chill to the bone. Olivia Sarah-Jayne Noyce also does not disappoint again in her role of the "wife", dealing with the trials of family life and the world outside with a mixture of emotions. It is the longest scene and far from the strongest in content, but Olivia is such a good actor to breathe life into it.

Jessica Bichard gets another chance to bring out her wonderful old lady act to good effect, even if the lady herself also isn't that endearing. This scene in particular makes it clear that Pornography is a play that never wishes to give you any light relief at all. This could have been a chance to give something back to the audience, but no, Simon Stephens has set his stall out with this play, the laughs and hope in life are not to be found here.

Finally plaudits must be laid the way of Becky Fowler and Jack James who without doubt are handed the most challenging scene to play out. A brother and sister reunited after her time away and a tale of incest are brought vividly and fully to life in perhaps one of the most difficult scenes I have ever had to watch in the theatre. It is brilliantly played with no concession at all and I did genuinely admire it, as enjoy is clearly the wrong word to use here.

If it seems odd that I haven't yet referred to the theme of this play, then believe me there is a reason. This is because for great swathes of Pornography it doesn't really refer to it itself. This play is on paper about the before and after moments of the 7/7 London bombings, the highs and lows of the London 2012 announcement. However many of the individual scenes feel they don't refer to this in the way you expect. Some are so tenuous, you wonder why they are even there. It is telling that the best scene of the entire play actually is explicitly about the bombings, the bombers themselves in fact. Samuel Littlewood, Luke Mortimore, Hans Oldham and Jamal Franklin sit front of stage and convincingly create the minds and emotions of those four on that day. The mundane and simple process and plans catalogued before us from their minds. It is the one scene that sticks to the theme of the play, is the best and leaves you irritated that so much of the rest hasn't been or is up to the same standard.

For me this wasn't as bad a situation as the repulsive Days of Significance last year, however it feels a much more confused play in itself. Seemingly lost in a number of scenes, all unrelated to one another or even worse, the theme of the play. Without doubt a play brilliantly performed, but perhaps much more so than the material deserves. No question that this though will set them up for the challenging world beyond graduation, so perhaps while I didn't enjoy the play, this play was in fact really well chosen.

Performance reviewed: Wednesday 15th March, 2017 (matinee) at the Royal & Derngate (Royal), Northampton.
Pornography is one of three show performed at the Royal by the University Of Northampton BA (Hons) Actors between Wednesday 15th to Saturday 18th March, 2017.
Details of each including ticket options can be found at: https://www.royalandderngate.co.uk/whats-on/uon-2017/Details of Royal & Derngate can be found by visiting their website at http://www.royalandderngate.co.uk/ 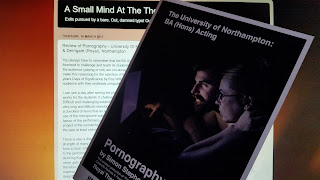