Review of Bazaar And Rummage by Sue Townsend at The Playhouse Theatre, Northampton

September 26, 2015
In my relatively brief theatre life I like often to try to spot tidbits of information with any new plays that I am seeing. Most are generally dull, maybe a writer I have or haven't seen before or an actor reappearing. Bazaar And Rummage though provides one of the more vaguely interesting ones in that it was first performed in 1982 in the compact 90 seater Royal Court Upstairs, which just so happens to be the same place I saw my very first London play, Rainbow Kiss in 2006. Well that is interesting to me anyway...

The writer of Bazaar And Rummage, Sue Townsend, is someone I very much grew up reading via her classic Adrian Mole diaries. However despite loving them so much, rather oddly I have never seen or read anything else from her career as a writer. Bazaar And Rummage (Townsend's fifth play) is about a group ("You can't call them a group. They've never met!) of agoraphobics who attempt to recover through holding as the title suggests a bazaar and rummage sale. The all female cast of six offer a mix of oddball characters from the driving and controlling Gwenda (Juliet O'Connor), the observant social worker Fliss (Corinna Leeder) and the three agoraphobics themselves including the constantly swearing Margaret (June Lovell). The sixth character is to me even now a puzzle, but more on that later.

What we have though is a very observant and of its time social play built via Gwenda upon the fear of a downwardly spiralling society. Perhaps actually it could be considered quite relevant even now, for the fear of heading out into the world where as Katrina (Jenny Bond) observes, you might get robbed, raped or burned alive in a vehicle pile-up. Good comedy material there you might think. However it works as all the best comedy plays do, edging high humour with pathos. So yes we can lurch very comfortably from the shear madness (and yes hysterical) rendition of My Way (a magnificent moment from Bond and Lovell) and then straight into the sorrowful and graphic description of a tragic event Margaret describes.

It is indeed a very funny play with many sharp one liners, but where much of the comedy comes from the characters interaction themselves. Also despite being over thirty years old it seems less dated than you might expect, especially if you remember that time and can get over the now sometimes politically incorrect language and tone.

The cast are generally of great quality. June Lovell steals most of the stage after her potty mouthed antics arrive. Her entrance, being carried legs akimbo is a magic moment. Jenny Bond is wonderful as the lethargic Barry Manilow fan, his face proudly portrayed across her bosom. Juliet O'Connor who I have seen twice before at the Playhouse is once again magnificent value as the calculating Gwenda, all hidden agendas and pushing up of spectacles.

The calming influences come from Fiona Abbis, very much the less out of control agoraphobic, who I have to admit provided a rather interesting, but very cute dialect to proceedings. The most calm and controlling element though was provided by Corinna Leeder, who becomes less observant as the play develops and Leeder plays the role with just the right amount of balance. The final cast member who I have already alluded to is Ingrid Heymann who is saddled with the oddly pointless character of the WPC and is only present at the end, where an up to then excellent quality play descends into a very weird denouement. The role is nothing, but Heymann does all she can and that I Want To Be Loved By You provides a pale and pointless imitation of what had worked earlier in the play with My Way. For the end to be this weird and disappointing is a shame as so much of what comes before is simply brilliant.

However once again this is a highly spirited amateur production, simple on set but high on quality performances and provided an excellent couple of hours of entertainment.

Bazaar And Rummage continues at the Playhouse Theatre, Northampton until Saturday 26th September, 2015. For full details visit their website at http://www.theplayhousetheatre.net/ 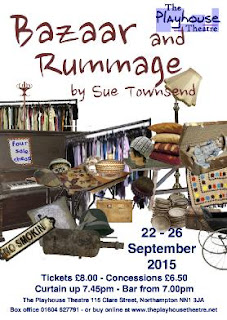