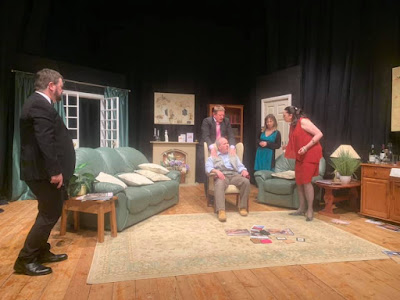 The comedy-thriller Theft by Eric Chappell tells the story of an anniversary celebrating couple returning to the devastation of their home being ransacked in a burglary. However, this ransacking pales in comparison to the ransacking of their lives that then occurs as home truths are revealed. 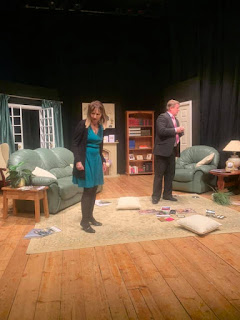 Anyone old enough to remember the works of Theft writer Chappell (Rising Damp and Only When I Laugh), could be forgiven for thinking that this 1996 play might feel a little dated for a 2021 audience. However, bar a few references much of their time now (the weaker sex and female priests for instance), Theft still feels comfortable in the 2021 world, where many of us just want both a good evening of theatre and a good bit of fun. With Theft from the highly regarded Wellingborough Technical Players, they get just that.The action starts as we find the man of the house John Miles played by Graham Breeze returning, very angry, to his home. He is a rightfully boisterous character, channelling all the rage of the play pretty much through him, and the moral thread that also runs through the play. Breeze is solid in the role, if for me, far too angry at times throughout, and personally, after the initial onslaught entry, which works well, would have benefitted from turning the sound volume of angry down.

Andrew Tidbury as Miles' friend Trevor Farrington is the perfect antidote to the anger, a comically cowardly and softly spoken character, who creeps around trying to look brave behind a golf iron, but jumping at every creak and thud. Shelley Scripps plays the wife of Trevor with a caring, but with an equal measure of self-interest as events conspire to reveal a very personal secret. 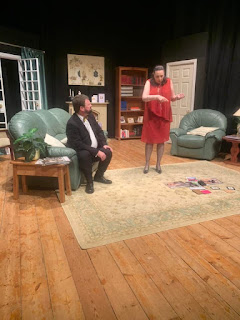 The fourth character introduced to the play is Barbara played by Di Wyman, the wife of house owner ("our house") John. Di Wyman plays the initially inebriated character with a pompous air throughout, always feeling she is above everyone in status (and actually also above everyone in another area as well as it turns out).

The final character introduced, and in brilliantly staged form, is the burglar of the piece, Spriggs,. This role is in the hands of the immensely reliable Adrian Wyman. Here perhaps, is Wyman at the best I have seen him, in a role that fits his comedic timing and style like a glove. He dominates every scene he is in and ekes out every ounce of comedy in the script, and then some. A quite brilliant performance. 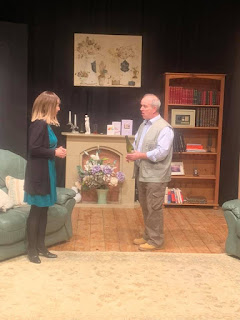 The set is a stripped back living room, presented with furniture and decoration upon an effective black box. It is surprisingly good, working with the antics nicely. Equally, Richard Llewellyn directs with pace, never allowing this reasonably long play to flag. Keeping the cast moving and never allowing the eye to linger more than a moment, the play zips along and never feels like its running time.

Theft is a surprise, in both script, storyline and humour. It has hardly dated, and here with the quality Technical Players cast, is well performed. It deserves a full audience for its remaining performances, and actually, after a couple of years of trial in the world, you also deserve to see this treat of a play.

A ticket to this would not be a theft of your money, it would be a treat for your soul.
⭐⭐⭐⭐
Performance reviewed: Wednesday 10th November 2021 at the Castle Theatre Studio, Wellingborough.
Theft runs until Saturday 13th November 2021 (including Saturday matinee).
Tickets and further details are available here.