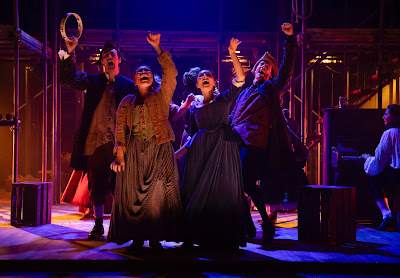 Just over seventeen months after my last visit to a theatre and following not only a pandemic, but a personal period of prolonged ill-health as a result, there was obvious trepidation in taking my seat in a theatre again. Maybe what I needed was an uplifting gem of a show to truly get me back into the theatre fever.
Step forward the bawdy and cursing joys of Gin Craze! This new musical from Royal & Derngate and China Plate is a co-production with English Touring Theatre that provides perhaps the perfect antidote to a dry period of theatre as the sloshing of gin and the tales of these ladies of gin lane thrills throughout. 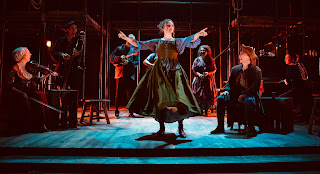 Leading our tale are gin entrepreneurs Mary (Aruhan Galieva) and Lydia (Paksie Vernon), both down on their luck for a mixture of reasons, but they club together to form an alliance in the burgeoning new world of gin, and battle the constant law changes that try to kerb the business.
History says that at the time this musical is set, in the 18th century, the average Briton was knocking back 1.5 litres of gin a day. It was the way out of the horrors of general life and no surprise it became known as mothers 'ruin as it destroyed so many lives over its easy availability.
This new musical written by April de Angelis and Lucy Rivers doesn't gloss over the grim part of the tale, it doesn't exactly finish on an inspiring note for instance. Gin Craze! however, provides fun and fruitiness with capital Fs and is riotously funny and seriously rude. There is no shying away from the crude language of the time, and as a warning, everything is here, so try not to be sitting next to granny while watching this (however I am sure she would delight seeing it privately!).
April de Angelis' book is extremely funny and only occasionally predictable, and coupled with Lucy Rivers' music, forms a powerful partnership. Rivers' music is catchy and melodic, very reminiscent of folk much of the time, with subtle songs and then rising to energetic ones like It's the Law, which gets the appreciative audience geared up for a right old clap-a-long, harking, for a moment, back to the old music hall days. Elsewhere the cracking Gin Dive is a brilliant song, wisely reprised towards the end, but with added style and emotion. It really is a brilliant soundtrack full of a mix of styles to keep you entertained. 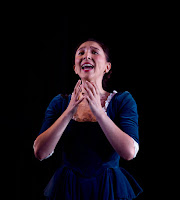 Performances are brilliant from the soft and troubled performance of Galieva as Mary, and the more energy-filled one from Vernon as Lydia, which as the story changes becomes a more ballsy performance. Her path is troubled as well, and Vernon puts great sadness into her performance as the story develops. Their duets are also beautifully performed. 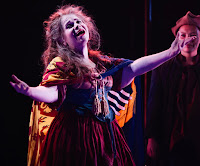 Debbie Chazen is superbly full-on as Moll, providing a huge amount of the filth that features in the show, especially in her court scene where a huge number of audience member titters result. She also doubles as the hideously vile Queen Caroline, parading herself up high above the peasants below. Rachel Winters is comically upper class as Sarah Fielding, busy taking notes of research for her latest book.
Rosalind Ford has the challenging role of Suki, generally unlikeable, but with a performance that still leaves you feeling sorry for her situation. Paula James is huge fun as Evelyn, at one, desperate to get the love of a certain gent, and second, unable to understand the most blatantly described situation, told through the incredibly funny song The problem of... 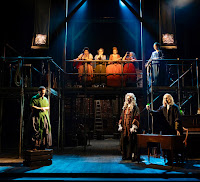 Two gentlemen complete the company, Alex Mugnaioni and Peter Pearson, playing a multitude of characters. Among my favourites was Mugnaioni as Tom Jones author Henry Fielding, who plays both a vital role in the story and also knows when to deliver a poorly timed joke. Pearson is also great fun in his role as the blind brother of Fielding, John, displaying some neat crockery identification.
Visually, Hayley Grindle’s set is not pretty, rugged scaffold polls are used to create the grim world of London at the time. However, it switches smoothly from venue to venue, be it the streets of gin peddling, jails, grand homes or the home of monarchy itself, if effortlessly becomes what the show needs it to be. 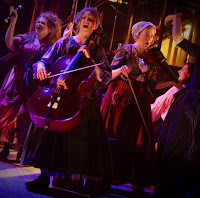 The ridiculously talented cast perform all the music themselves as well, with a huge mix of instruments, proving this company can turn itself into anything it wants. This cast is skilful with, yes, a capital S, and work as one to produce a hugely polished show, where everyone supports one another.
Gin Craze! is just the show we all need in these craze-y times, and no question should you head to the Royal & Derngate to take a swig of the show. If you are wary of a return, the run of Gin Craze! remains socially distant seating and the theatre is doing everything they can to keep its audiences both as safe as possible and at ease during their visit. Head off to the Royal for a good old knees-up before the shows over on 31st July.
Filthy, frolicking, and fantastic!⭐⭐⭐⭐⭐
Performance reviewed: Thursday 22nd July 2021 at the Royal & Derngate (Royal), Northampton.
Gin Craze! runs at Royal & Derngate until Saturday 31st July 2021
For further details about the Royal & Derngate see their website at http://www.royalandderngate.co.uk
Production photos by Ellie Kurttz 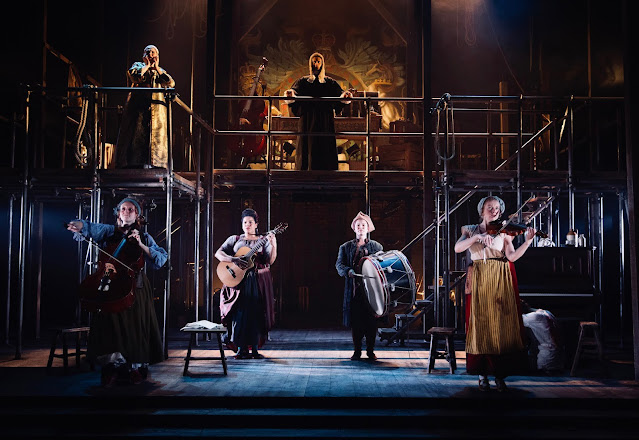