Review of A View from the Bridge at Royal & Derngate (Royal), Northampton 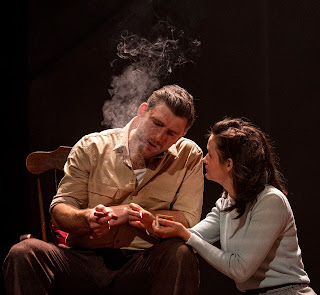 Although writer Arthur Miller died 15 years ago, and last published a play almost 30, he remains a force to be reckoned with, and you are probably still never far from production of one of his works, albeit one of probably just four from his back catalogue of 33 plays. If you pressed someone to choose his best, they would probably more often than not say The Crucible, because A: they studied it, or B: they have actually seen it. As for best though, maybe not. Perhaps that lies with the simpler format of A View from a Bridge, the gritty tale of immigration in the fifties. So, does this new version, a co-production between Royal & Derngate and York Theatre Royal, do it justice?

In 1950s New York, hardworking longshoreman Eddie Carbone lives a simple life with his wife and niece deep in an immigrant community. When two of her Sicilian cousins arrives, slowly Eddie's life begins to change forever. 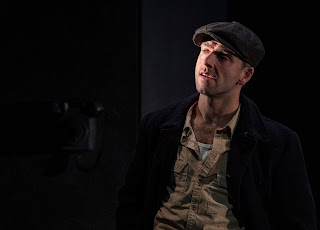 In a theatre world where life is rarely simple anymore and directors often get ahead of themselves with ideas and concepts, it comes as a delight when presented with a piece such as this version of A View from the Bridge directed by Juliet Forster. Never filled with clever unnecessary gimmicks, no big ideas to change a thing for "the better", no updating to make all the immigrant material about a mirror on modern life. This is Miller as Miller would have been produced back in the fifties. Allowing the audience to take their own meanings from the words and path that Miller takes us on, and simply allows us also to revel in the performances of this tremendously strong cast. And when I say tremendous, I mean it more than I have for a very long time. These actors live and breathe their roles, and when at the curtain call, your companion for the night observes that Nicholas Karimi is visibly drained, you see at that single moment the effort they have fed into the roles.

Karimi plays Eddie Carbone, a dream role for an actor, and a dream of an actor in the role. Raw, gritty, you follow the path that Eddie takes in a fixated state, even those, like myself who have seen it before, can find new depths in Karimi's performance. The final scenes, which I will not impart of their content, are staggering in their emotion. The swagger and physical movement Karimi bestows is simply incredible, and no, at that point, you don't see acting, you see Carbone and every bit of trauma that has brought him to this place in his life. 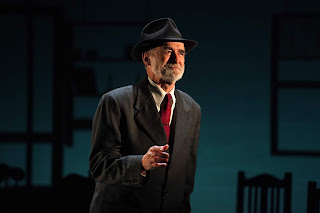 Overseeing all this, and "viewing" the developments is lawyer Alfieri, played with a relaxed and comforting style by Robert Pickavance. Nothing he has to say fills us with delight as we know he is imparting slowly upon us terrible events, but like all of the characters within this piece, he feels so real, so there in front of us.

Laura Pyper is understated and controlled as Beatrice, witnessing her troubled husbands torment calmly despite how much it clearly troubles her and his relationship with Catherine. As Catherine, Lili Miller delights in her innocence at events, a sort of lack of understanding of things, which makes the eventual events all the more traumatic. Like all the roles, the realism of how she performs is stunning. 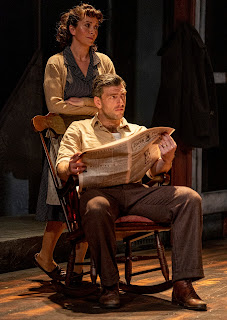 As blonde immigrant Rodolpho, Pedro Leandro makes layers within layers in his character. Allowing those unfamiliar with the story to happily become confused as to his motives. His scene opening the second act with Lilli Miller is perfectly played, revealing nothing, but imparting much.

Reuben Johnson has less to say than most in his role as Marco, but in the perfection of casting, you feel you could not find any better. His moments of stunning confrontation with Eddie are raw, animalistic moments of tension, and they both are exceptional moments of theatre, which Johnson leads.

Rhys Jarman's set is simple and effective, offering a glimpse at Eddie's workplace at the start before falling back to his home for much of the rest of the play. Yvonne Morley as voice and dialect coach has done an exceptional job creating within the cast some of the clearest and crisp quality dialects I have heard for a while. Finally, a strong local community ensemble breathes depths into the scenes, forming the "community" itself, making the area thrive more with activity.

A View from the Bridge is superb, the best Miller production I have seen to date, and with an exceptional cast and creative team bringing an uncomplicated freshness to the show. A play for today, yes, but, this time, it doesn't force us to acknowledge that, but treats its audience with respect and allows us to take our own meaning. Superb!

Raw, gritty and emotionally stunning. This is Miller and A View from the Bridge at its very best.
⭐⭐⭐⭐⭐Performance reviewed: Wednesday 16th October 2019 at the Royal & Derngate (Royal), Northampton.

A View from the Bridge runs at Royal & Derngate until Saturday 26th October 2019. 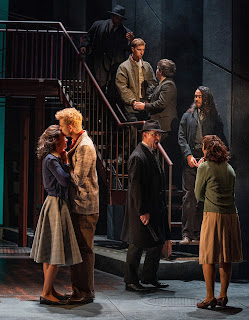