Review of Made In Dagenham - The Musical by the Northampton Musical Theatre Company at Royal & Derngate (Derngate), Northampton 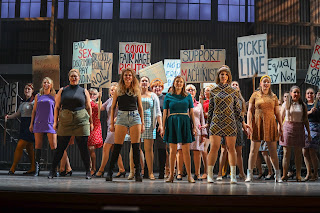 Back in 2015, the Northampton Musical Theatre Company performed Sister Act as their yearly show at the Royal & Derngate. It surpassed their own excellent South Pacific the year before, and set a benchmark for amateurs performances that have been difficult to beat, NMTC including. Over the last few years their choices of shows have been populist (bums on seats), but more than a little formulaic, and some of them sadly pretty average shows. So, with Made in Dagenham, can we now move on from talking just about Sister Act? You know something, I reckon we can. 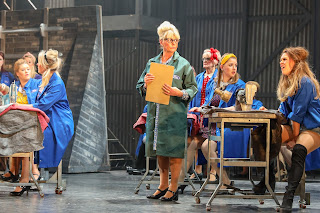 Made in Dagenham - The Musical is based on the 2010 film which told the story of the 1968 Ford strike by the female machinists working towards an equal pay deal. Along the way, unexpected political activist, Rita, finds herself in the presence of Prime Minister Harold Wilson, and Barbara Castle among many other high flyers. Is it a battle she can win though? History already knows that answer.

Made in Dagenham is an inspired choice of NMTC, it is bright, breezy, superbly written, rarely seen, and a perfect showcase for some old faces of NMTC and some stunning new ones. 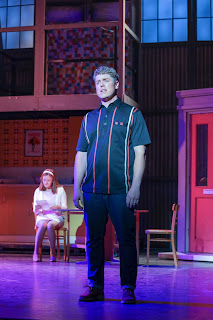 One of the new faces is Bethany McDonnell as lead Rita O'Grady, and she is superb, strong in character, with the slowly growing strength of her character brilliantly portrayed. She also handles the poignant moments delightfully and shows a lovely singing voice from the outset with the wonderful Busy Woman.

Her husband, Eddie, is portrayed by NMTC regular and favourite Dan Hodson, and once again he doesn't disappoint. Big in character, and like McDonnell gets the balance between happy and sad perfect. Their work together is particularly strong, with delightful work on I'm Sorry I Love You in particular, and Hodson probably guarantees a tear in the eye with his poignant performance of the stirring The Letter.

Both Brett Hanson and Sally Whitestone have great fun as Harold Wilson and Barbara Castle, both nail their characters in a big deliberate caricatured way, with Hanson especially strong and exuberant and nails the hilarious cupboard moment especially. Great fun! 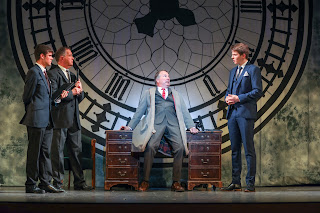 Youngsters Noah Taylor-Whitley and Lily-Grace Tofte are good fun as the O'Grady's children Graham and Sharon, with Lily-Grace growing up fast following her sweet performance as Cossette in Les Misérables back in 2018 with the NMTC Youth Society.

Finally the always reliable Ben Stanton elicits out of place boos from the audience with his performance of Tooley, always a delight to see on stage and while it isn't a huge role, he makes the role his own and commands the opening of act two with his powerful performance of the superb song This Is America. 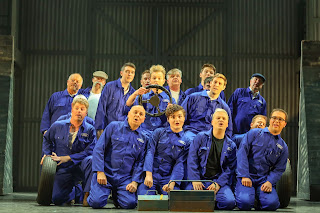 A constant strength of NMTC shows, whatever the show, is the brilliant work of the ensemble, and with Made in Dagenham it is no different, and perhaps here they are at the best I have seen them, especially as this show provides so many opportunities for them. They once again show the stunning harmonies which are always one of the best moments, and in particular in Storm Clouds, where the skin tingled just like it did in the epic Poppies sequence in The Wizard of Oz two years ago. Enormous fun is also to be had from their work in Cortina, another brilliant song, epitomising the sixties period. Their whole work is delightful, but I now expect nothing less.

While performances were excellent throughout, the curse of time in the theatre had some very disappointing effects on the show, with a couple of sticky set changes, sound issues, and some big lighting problems. It did affect the quality of the second act in particular. However, there is no question this will be less obvious as the week goes on, so, is no real judgement on the show as a whole. 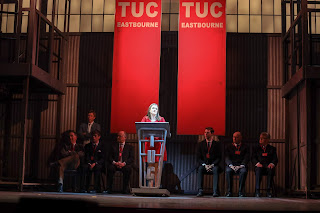 The director shows his usual ability to get the best out of the excellent cast, and Made in Dagenham goes beyond the slightly repetitive recent years with the NMTC shows. Graham Tear is once again at the helm of his eleven strong orchestras, delivering brilliantly the superb music that this show has.

Made in Dagenham is a true delight. A fresh show, brilliantly written by Richard Bean (book) and Richard Thomas (lyrics) with stunning music from David Arnold, funny and sad in equal measure. I do not hesitate in recommending that you get along and see this brilliant production of a stunning show. The Northampton Musical Theatre Company very much back on form!

The Northampton Musical Theatre Company perform Made in Dagenham until Saturday 2nd November 2019. They have a website which can be found at https://www.northamptonmusicaltheatrecompany.co.uk/ Twitter @theNMTC and Facebook at https://www.facebook.com/NorthamptonMusicalTheatreCompany

For further details about the Royal & Derngate visit their website at http://www.royalandderngate.co.uk 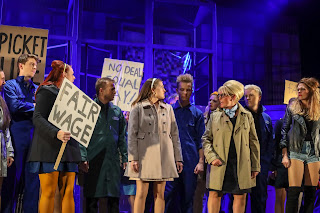