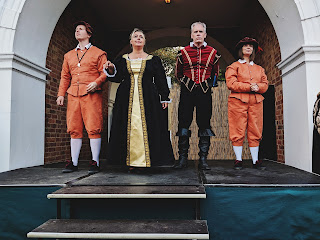 Twelfth Night was either my very first Shakespeare encounter or if not that, the one I definitely remember as being so. It was one of two of his plays that I studied at school (I genuinely can't remember which dry boring history one I also studied), and it was, 100% the very first Shakespeare I saw on stage live, via a trip to the RSC as Stratford no less with my school. In that cast were the likes of Tony Britton (Sir Toby Belch), Desmond Barrit (Malvolio), Haydn Gwynne (Olivia) and Derek Griffiths (Feste), and it went some way back then to stop me from hating the bard, despite eventually having the soul ripped from me via the teaching of him.

Since I started my epic escapade of theatre back in 2014, my love has been rekindled slowly for the bard with just seeing and enjoying plays being performed, as they should, and not dissected. Also, life has been brought into them by being endlessly innovative, maybe controversially for some, with their telling. My love is perhaps finally coming through. 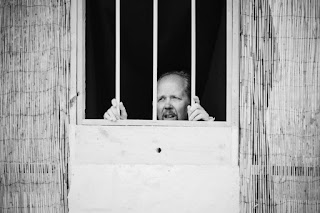 So, as White Cobra decided this year to embark on their first Shakespeare, it was wonderful after a mere 25 years to see Twelfth Night live for a second time, and rather wonderfully in the delightful walled gardens of Delepre Abbey on a very sunny, retina-burning evening.

Twelfth Night needs little explaining after all this time, it is a farcical tale of twins separated, random unlikely disguises and some quick love decisions at the end. You might think this is Shakespeare's own little pantomime and I don't think really you would be far from the truth.

Director John Myhill, who has more than a few roots in panto, might have had the same idea as we have comic antics where you want to shout out he's behind you, broad characterisation and it all ending on a very panto typical cast singalong as well. Maybe we should have had someone holding up the words as well? 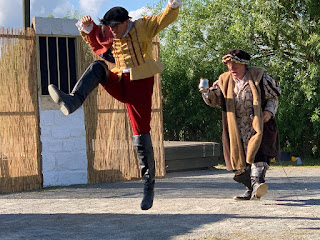 The cast is packed out with all the stalwarts of White Cobra, and a few new or rarely seen gems of addition as well. The regulars of the likes of Richard Jordan as the bulbous, red-faced, Sir Toby Belch and Fraser Haines as the poor put upon Malvolio are both clearly having enormous fun, the latter perfectly deadpan, the former, gloriously over the top, to make both performances gems in themselves.

Kate Billingham gives Maria a wonderfully naughty, mischievous edge, while Victoria Miles is stately and clearly spoken as Olivia. Barry Dougall is back in glorious fool action as Feste, and also gets to delight with a few singing numbers. Ben Stanton continues to show his multiple skills as Sebastian, although the role is somewhat streamlined and doesn't come to its full until towards the end. 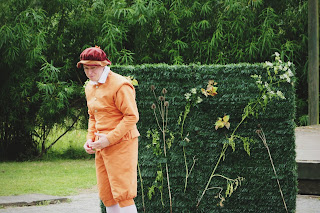 Newcomer to White Cobra, Juliet O'Connor gives a lovely performance as Viola and her alter-ego Cesario, switching into the different character superbly, and easily handles the outdoor space with aplomb as do most of the performers with their projection.

Perhaps the greatest delight from this production, and finally for myself glorious to see him having a bigger role to get his teeth into, is Martin Borley-Cox's Sir Andrew Aguecheek. A first-class comic performance, even managing to steal scenes from Sir Toby.

White Cobra's production is trimmed and delightfully paced, coming in at just two hours. Also, congratulations for most of the performers managing to hear their cues, without the need for too many, The Dresser "here comes X now" moments, no mean feat I should imagine as the words drift into the wrong direction. 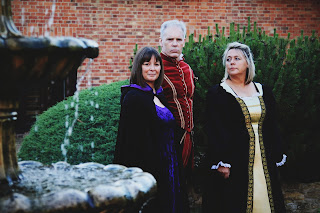 It was wonderful to be reminded after 25 years of where my Shakespeare properly began and sure, Twelfth Night is still probably one of my favourite Shakespeares, and this version is a classy little production of it to boot.

Twelfth Night runs until Sunday 14th July 2019 at Delepre Abbey, Northampton and one further date in July at Benthall Hall, Broseley. For full details visit their website at White Cobra