Review of The Pope at Royal & Derngate (Royal), Northampton 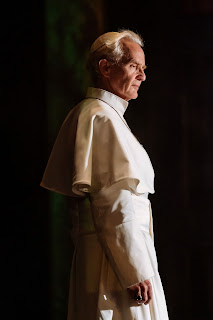 The Pope weaves the story of the resignation of Pope Benedict into a finely tuned tapestry of entertainment. Enthralling, funny and with two devastatingly brilliant performances from masters of the stage. That's all you need to know really before you go and see this show.

However, for those still here, let's flesh it out a bit more. As Our Lady of Kibeho did a few months back, The Pope brings religion to the Made In Northampton range, and once again, it sweeps to every success in making it accessible for all. You don't need to have any religious leanings to be thrilled by this tale, expertly written by Anthony McCarten (Bohemian Rhapsody), this is simply told, and intensely funny, there are actually some amazingly good one-liners in this play which cause show-stopping moments due to the audience's laughter. It is unexpected, but superb to see, and also importantly doesn's shy away from the numerous issues of the Catholic church. 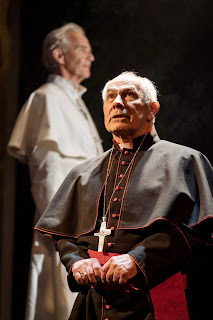 It helps that we have the incredible Anton Lesser and Nicholas Woodeson to delivery these one-liners and powerful speeches as well. Never has perhaps the papacy been as funny as here, and Lesser and Woodeson have the chemistry and stage presence to get everything so right.

I've always been a fan of Lesser, so, I would have been surprised to leave disappointed from this. I didn't, in fact, with his performance as Pope Benedict XVI, I ended up more astonished by him really. He brings charm, authority and more than a little sadness to the role as well. The final realisations of where his religious belief is at is devastating, and following all the relaxed chat from early, with the witty banter, all the more powerful for it.

Woodeson while not the star player in this, it is sold as Lesser's show generally, is parallel to him in performance, his sharp and witty Cardinal Bergoglio is effortlessly cool, initially thrilled by the prospect of retiring at 75, but being challenged with a very different future during his meetings with The Pope. 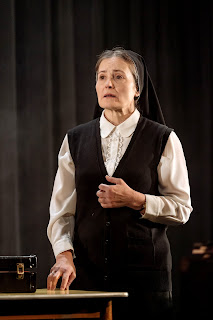 Lesser and Woodson's scenes together are theatre magic in the extreme. Sure it helps that the lines are funny, clever, and the play always entertaining. However, you imagine that these two could read the Yellow Pages (if they still existed) to one another, and make it thrilling.

While this is predominantly about the two main players, Faith Alabi is glowing as Sister Sophia, her charm is delightful, and her dedication to Cardinal Bergoglio palpable. Lynsey Beauchamp is understated as Sister Brigitta, a longtime friend of Pope Benedict XVI. They share a long scene in the first act which is in theory, is very plain in concept, but the two make it spark with strong emotional layers. The community ensemble of Will Adams, Sue Whyte, Jude Wilton and Patsy Wright bring a lovely depth to the production as well. 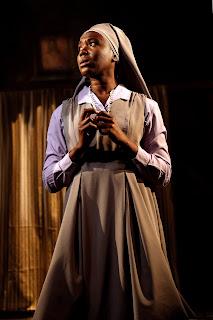 Director James Dacre is back to his best here, bringing flair to the proceedings like a movie director would to the stage. His approach is stylish and polished, and while it doesn't always work for people, here it feels perfectly pitched. Sharp, hidden scene changes, fluid movement. Angles are played with beautifully, keeping scenes of long chat flowing with gentle movement.

While the Made In Northampton range is proving extremely successful with three in the West End at present and one on its way, I haven't enjoyed one more recently as much as The Pope. It is a coming together of several perfect things, including director, performers and writer. It's a play that you truly need to see.

The Pope runs at Royal & Derngate until Saturday 22nd June 2019. 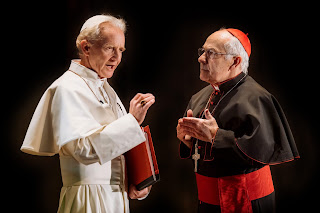