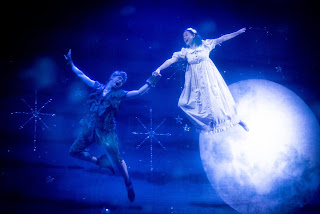 I have been invariably impressed and depressed by the two offerings of Qdos pantomimes presented at Royal & Derngate that I have seen in the last three years, with them lurching dramatically from unnecessarily adult, to perfectly judged family entertainment. There is no question that Qdos though know how to do a panto, they always complete that mental checklist of things you seek from a panto trip. So, with an equal measuring of good and bad in the past, I went with trepidation, but hope, that this year was going to be the better side of success and failure.

Thankfully it was, Peter Pan is one of the more perfect heartwarming and thrilling pantos that you could want, perhaps the strongest because of just having a tremendously impressive story to work with. It's true that this is a little less traditional at times, we don't have for instance the typical Dame to deal with. However, with its grand baddie and comic moments, it still feels very panto at all times. 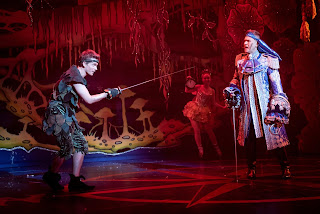 Heading the cast is a lovely little innocent performance from Joe Sleight as Peter, balancing the character of J. M. Barrie classic and the need for that little bit more in the panto context. It's a star turn, despite not being anywhere near top billing (and deprived unfairly of poster/programme cover inclusion). He shows adept skills on the wire as well for the prerequisite flying scenes.

The required baddie, here in the guise of the classic Captain Hook, is played by Darren Day. Going all cockney for the role, he is suitably nasty but keeping it light enough not to be too scary for any real young kiddies about. Although they might clutch their teddy bears a little closer when home. 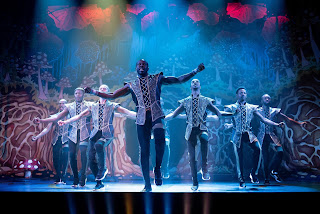 Wendy is delightfully played, but underused, by Millie Davies. A sweet performance, vocally the strongest of the show as well. While Nadia Kramer as Tiger Lilly gets the chance to perform perhaps one of the best-reworked songs, with Clean Bandit's Rather Be.

Britain's Got Talent winners Flawless, bring something a little different to a panto, and while they of course only have one trick, it's an exceptional one, as they bring some incredible dance moves to the stage as The Neverlanders. 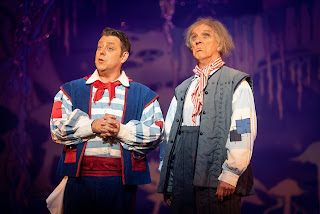 The comedy act, a staple for a successful panto comes in the form of vintage act The Grumbleweeds. While they are still very much on the circuit, their brand of comedy and success was at it's strongest in the eighties, and I, just about old enough remember them well. They are a much different outfit now, reworked as a double act, with original member Robin Colvill reborn as a dishevelled character and relatively new member James Brandon (joining in 2014), his clearcut straight man. Their appearances here make up a huge amount of the success of this entire show. The humour is sharp, friendly, occasionally rude but never lewd, and also extremely clever and perfect for the theatre environment. The best scene in the play is theirs, where Colvill (as Smee) finds a remote control which just so happens to have control of all the theatre equipment. So, as Brandon (as Starkey) and Beverley Mitchell (understudy in the role of Mimi the Magical Mermaid) attempt to sing a duet, chaos rules with theatre trick after trick. Brilliantly worked technically, and with a particularly strong surprise moment for the audience. It's a little too much to say that The Grumbleweeds make the show, but, without their brilliant impact, this would be a much looser package, and I am sure that the school group will remember fondly the fun at the expense of their teacher for a while. 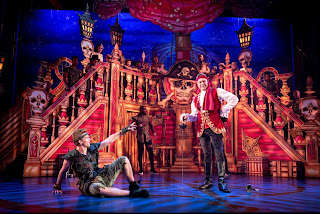 The set is full of colour and is efficiently switched from scene to scene smoothly, with only one noticeable delay during the production. The choreography is adequate, but at times feels a little repetitive. Day's singing routines especially appear to all follow exactly the same path at his proceeds left or right in his crescent return to the back of the stage excessively. Perhaps a little more variety here would have been nice.

Any qualms though are minor as Peter Pan is an exceptionally good pantomime, full of great performances, and comedy from The Grumblesweeds that is outstanding. Not just worth it for the ship in the bottle joke, but for a hugely fulfilling family classic panto!

Fabulous family pantomime with something for all ages and an incredible star turn from The Grumbleweeds.
⭐⭐⭐⭐½
Performance reviewed: Friday 14th December 2018 at the Royal & Derngate (Derngate), Northampton. 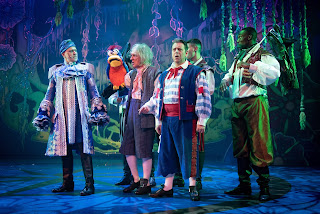