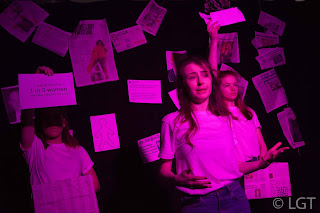 So, I return once again for the annual Flash Festival, the moment where the graduating BA Actors get their moment to show in their dissertation piece, what they have learnt over their three years at the University of Northampton.

Opening my fifth year of shows was Sonder Ensemble's topical offering, and interestingly titled, Screw You, This group of three performers created a snappy (just 25 minutes) piece influenced by Harvey Weinstein and the fallout from those revelations. Delving into a mixture of stories based upon real cases (some more obvious, about who they refer, than others) to create a brief piece exploring what has been one of the biggest stories of the last year.

The three performers in this show are Ceara Coveney, Gemma Leigh and Katie Lawson, and the first two already have already proven themselves to be extremely talented from past shows, and here they perhaps show themselves at their best. Lawson though had lurked a little more in the background in the main ensemble shows, but with Flash, as is often the case, there is a greater opportunity to show their skills, and here she brings her  A-game to the stage. 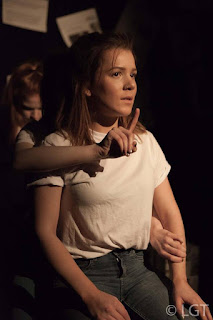 All three actors have a number of characters during this play, and often are challenged with some very specific accents to accomplish, and here they are all strong, from the clear and impressive drawl of Leigh, though to the antipodean skills of Coveney, all accents delivered here are very impressive, and more importantly crystal clear to the listener.

Many of the sequences of dialogue are also greatly enhanced by some nice physical theatre, moving potentially boring dialogue into a much more interesting affair. It didn't detract from your understanding of how strong the pieces were, and actually, by maintaining the interest with movement, I feel it enhanced all the stories they told.

It's tough material to enjoy, so as ever at this point, I use the caveat that this is a piece to admire instead. It was gloriously performed, with three talented performers and in the intimacy of the space at Hazelrigg, it gained a much more powerful impact as well. An excellent piece to start Flash for 2018.