Review of Of Mice And Men at Royal & Derngate (Royal), Northampton 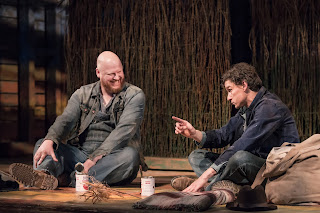 Other than, randomly, Charlie and the Chocolate Factory and The War of the Worlds, John Steinbeck's classic Of Mice and Men is perhaps one of the most familiar of stories to me. I have seen it several times before, and while at school, we studied it, and dissected it like the work of Mr Shakespeare, but with Steinbeck, I got out the other side still liking it.

This brand new version from Selladoor Productions, which opened in Canterbury last week, brings a by-the-book presentation of the trials of George and his slow, but incredibly strong friend, Lennie, to the stage. Perhaps, this is its first issue blocking a huge success from this production, in that it rarely does anything brave or different.

It's clearly been expertly cast visually, with the hulking form of Matthew Wynn as Lennie, and the diminutive (in comparison) Richard Keightley and Kamran Darabi-Ford as George and Curley respectively. Darabi-Ford especially perfect in his tremendously awkward scenes with Lennie, some of the best of the show, with this little "squirt" desperate to get one over the giant, due to his constant unease of both where his wife is and his constant need to prove his masculinity. Curley is, and always 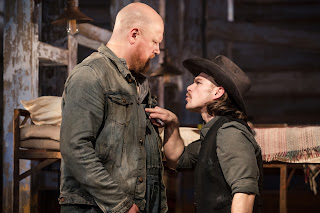 will be, an evil character in Of Mice and Men, however, Darabi-Ford actually managed to make me sorry for him a little for the very first time, portraying him more as the desperately sad character he perhaps truly is.

That little turn of the story was perhaps generally all this production offered to me. It is, as already mentioned, a very standard staging of the show, with visual flairs like the depiction of the workers behind the brush, one of those few truly tingling moments.

Performances are however fine across the board, with Wynn especially strong as Lennie, bringing both the brutal force of his character to bear and the immense childlike nature with those constant pangs of desire for his rabbits.

I really enjoyed Darren Bancroft in the smaller role of Carlson, from his lighthearted arrival, and onto his aggressive, but perhaps, in reality, loving offer, regarding Candy's dog. The realisation of the said dog on stage was really great entertainment as well, and well handled by Kevin Mathurin, who later returned to play a tremendously physical performance of the crippled Crooks, and filled with a deep emotion of character. 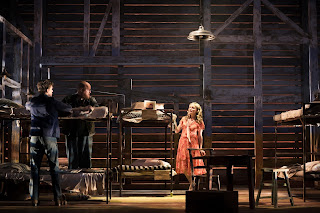 For those who haven't seen Of Mice and Men before, I advise skipping this paragraph. Rosemary Boyle as Curley's wife, provided all that she was able to in this very male-dominated story, and in that vital scene with her encounter with Lennie, I hugely enjoyed the stripping back of the entire set to let it play out on the full stage, however, Boyle is then desperately let down by a, totally dropping the ball, directorial decision of after she has been killed having her simply stand up in the centre of the stage and retrieve her case and walk off. It breaks the illusion incredibly, and could easily have been dealt with behind the set's brush that then swoops back on.

If it appears that I didn't appreciate this production, that is slightly untrue, I enjoyed much it had to offer at times beyond some great performances, I delighted in the push-out/in set changing scenes dramatically and smoothly, and I particularly liked the low-level impact of Benjamin Grant's sound design, coupled with some brilliantly low-key music from Mark Aspinall. There were a few curious moments of lighting issues, where they almost appeared to flicker due to people walking about left and right off stage? Also, whether intended or not, actors being seen behind the flats during the Curley's wife and Lennie scene, were an unnecessary distraction.

Accents were mostly on point and rarely a challenge to totally catch the dialogue, although I felt that 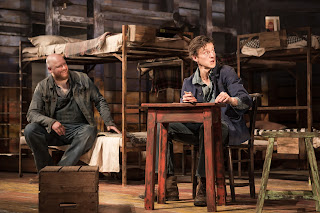 on occasion Andrew Boyer got a little too much into it, leaving some of the words drifting in the air between performer and audience.

So, this new production brings a solid production of the story to the stage with some excellent performances. It's a brilliant story that still got me as it culminated (although what possessed some of the audience to laugh at the final scene, I have no idea).

If you have seen Of Mice and Men on stage before, this version perhaps doesn't bring enough new ideas to warrant another viewing, however, if you have never seen this timeless classic before, I very much suggest you take this opportunity either here in Northampton or at any of the eight more stops this touring production visits. 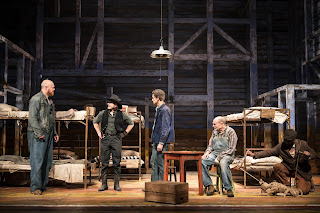