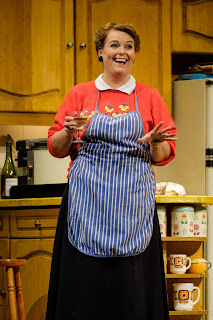 As we settled in the theatre ahead of the performance of this touring version of the, up to then unfamiliar to me, Shirley Valentine, I could not have realised that a slight inner-Valentine part of me, old before my time, had emerged. Making note of the far too loud pre-show music in the theatre was a typical old person thing to comment on, which verbally I tried to discuss over the aforesaid loud music with my company for the evening.

I feel it's a far point though, as this eighties written piece from Willy Russell was clearly mostly catering for a certain age group and therefore I suspect comment and thought of this music might not have just lain within my thoughts.

Fortunately, however, this minor issue was to be the lowest point of this highly entertaining evening and revival of Russell's well-regarded classic. Shirley is a tired and ill-appreciated housewife, preparing dinner for her working husband as she relays the conversation with both us and "wall" of the failings of her marriage and life in general.

Taking the role of Shirley as its tours to Northampton is the confident and quite brilliant Nicky Swift. This did come as a surprise to a few assembled in the audience, as this tour has had Jodie Prenger at many of the venues, although it was always clear from Royal & Derngate material I had seen that she was not present for this stopover. However, sadly poor organisation of the tour itself and the inadequately out of date social media (the tour website doesn't even contain information on the Royal dates and the Twitter feed has not been updated since the start of August as I write this), will not be helping with this.

It doesn't matter though as I doubt anyone would really leave disappointed by the performance of Nicky Swift. At absolute ease in the role, breezing through the substantial script in this very long one-woman show. The characters she creates and comic moments really are brilliantly handled and has no problem at all preparing chips and eggs (smellotheatre once again returns quickly after Rules for Living has just departed) while keeping her character totally intact. Her accent though comes as second nature from this Liverpudlian actor.

The set for the first half from Amy Yardley is simply gorgeous, if you can call a kitchen gorgeous? It forms the most perfect backdrop for this very literal kitchen sink act to play out on. Perfectly recreating an eighties kitchen, complete with a rather familiar to me, Hotpoint washing machine. It's true that the second half rocks and vista of Greece are a bit of a letdown in comparison, however, this is the moment that James Whiteside gets to come and play as the lighting designer with the gradually setting sun clearly portraying the glide towards the closing of the play. There is one single scene change in the first half and it is dealt with in a delightfully playful style by the stage crew, happily sampling the leftovers as they deal with the props.

My companion of the evening (female, that is important) asked me at the interval whether I as a man could relate to the theme and humour of the play? While the easy answer I gave of it being, "yes, it's written by a man" is perhaps too simplistic, it still feels correct the next day. Shirley Valentine is very much a woman's play in theme, with it's regard and respect of men being pretty negative, however for those non-neanderthal men in the audience, you would not be truly offended by the portrayal of the masculine part of the relationship. This perhaps though is where the play falls down a little in the modern age, this world is much less relevant in the present. Females are less often not tied to the kitchen preparing unappreciated chips and eggs for the worldly breadwinning man. As suggested also by my companion, the age of 42 is less appropriate of this stage of life (although as we teeter, that might be more wishful thinking). Life has evolved beyond that, someone that age is perhaps less likely to be feeling old, maybe unlikely to have a child old enought to have left home and sadly potentially less likely to even have a home of their own. Perhaps also the revelation of female power would be much better portrayed in this day and age than by a fling with an obvious womanising greek.

Shirley Valentine is clearly a product of its time, dated yes, but very relevant back then for the impact it and the subsequent film made on the females of the species. Perhaps they didn't all run off to Greece, but maybe with his witty and intelligent play, Russell did much to empower them towards where they are now at. Therefore if for no other reason than this I suggest you catch this really good quality revival of the socially important play.

Raise a glass to this nicely rekindled classic.
⭐⭐⭐⭐

Shirley Valentine runs at the Royal & Derngate until Saturday 7th October 2017 before continuing its tour.until whenever it ends. For possibly incorrect details visit the website at http://shirley-valentine.com/

For further details about the Royal & Derngate see their website at http://www.royalandderngate.co.uk/ 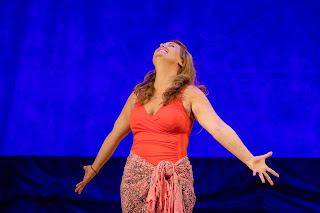