Review of The Caretaker at Royal & Derngate (Royal), Northampton 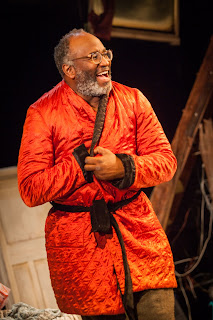 Some other very wise person has probably described Harold Pinter as a marmite playwright, however, if they have I still claim it as my own and happily used it a few times, before, during the interval and after this new production of The Caretaker, from director Christopher Haydon (a co-production between Bristol Old Vic and Royal & Derngate). Pinter has a strange style which you clearly either get or don't. Since seeing his work first in 2013, with The Hothouse at Trafalgar Studios, I have come down in the first camp of "enjoying" his work. I have to be honest though in the fact that I have difficulty working out why.

The Caretaker is a prime example of the originality and oddness of Pinter, Aston meets a tramp, Davies, before the play opens, and brings him to "his" house and allows him to sleep there. Soon Mick arrives, Aston's younger brother and things become less clear of the status of these three. Over the course of two hours or so, characters are developed a little, but very little happens, and at the end, you leave with both no apparent resolution and the wonder of why you actually enjoyed it at all. I have no idea what a non-Pinter fan would think by the whole evening, although I have my suspicions. 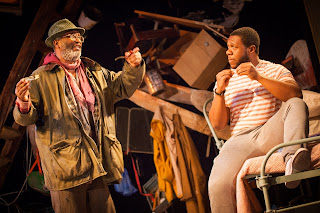 Director Haydon has gone some way to bringing the play into the present, a flash of a mobile phone and computer monitors scattered about hint at this, and it mostly works. This is very much a play that could fit at any time and much of the subject matter is relevant to modern immigration issues, homelessness and loneliness in general. Some moments feel odd though with the script not being updated figures wise, so a reference to a £7 weekly rent is mentioned, and this distracts a little from the flow. The casting of three black actors (not the first time though), makes the many references to Davies' blacks interesting as well, but perhaps not unbelievable.

As Davies, Patrice Naiambana creates an oddly likeable person, with his life clearly as dishevelled and broken as the clothes that he wears. He is a developing beast of a character in the play, jovial at first reception to the home of Aston, but building and more desperate as events change, fearing his return to the street at any time and desperate to get onside with one of the two siblings. I admit that it took me a little time to get my ear around his very much Caribbean delivery, however, once there, you really appreciate how fine a character he is creating. 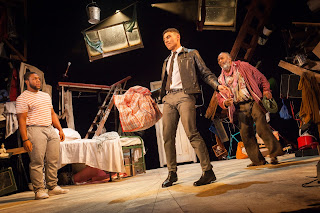 Perhaps the most interesting portrayal of the characters comes from David Judge's Mick, portrayed as a typical wideboy, spiv type Londoner with a penchant for leaping around Gollum style. This, like Naiambana, gets a little getting too perhaps, but personally, I loved the abject weirdness of it all. The bag snatching scene, in particular, very much prolonged here, was especially weird and delivered with an apparently never-ending style by Judge with building menace and then ending in his own boredom. I suspect if anyone has an issue with this version of The Caretaker, Mick is where they might. For myself, I loved the clipped yet also lilting nature of the delivery and he very much made the play work more for me as a result.

In absolute opposite to Mick, Jonathan Livingstone brings a slow, sloth-like movement. While not huge in height, he appears a giant of a man, broken inside but endlessly willing to help any way he can, very much Lenny from Of Mice and Men in character. Even if it seems the skills he posesses don't even reach being able to fix a toaster. 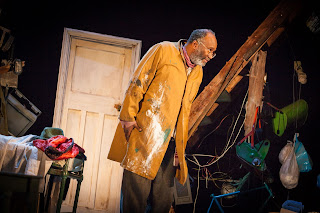 Designer Oliver Townsend has created a remarkable beast of a set. Sitting on a round pallet like flooring and with an apparent mini-explosion from the epicentre, furniture and living material has billowed out from the centre. Beds are strewn awkwardly, chairs, broken and disassembled hang precariously in the air with broken limbs floating near. A shattered toilet to the right, a shopping trolley filled with detritus to the left. An open box of cards fixed in time as they cascade out. Pinter's play The Caretaker is "a kind of moment frozen in time" which he saw once through an open door, and this set very much represents that. The constant rain at the two twisted windows also makes the whole situation more brooding and threatening in nature.

Its a clever version of the play, while forcing it into a modern setting doesn't always work and perhaps is another pointless way of making an old play relevant (there has been a lot of this going on recently due to modern life and politics), still manages to keep the original story, what there is, strong. I do perhaps pine for an old play to remain that, without forcing modern life into it. However, if you are a Pinter fan, this version of The Caretaker will not disappoint.

The Caretaker runs at the Royal & Derngate until Saturday 28th October 2017. Details and tickets here: https://www.royalandderngate.co.uk/whats-on/the-caretaker/ 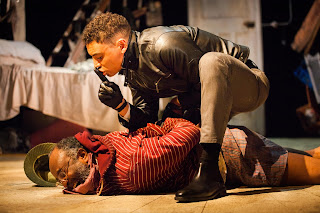